At the Intersection of MAID and Dementia

Home / Education & Resources / Webinars / At the Intersection of MAID and Dementia

At the Intersection of MAID and Dementia

According to the Alzheimer Society, about 76,000 Canadians are diagnosed with dementia every year. Dying with Dignity Canada (DWDC) encourages all adult Canadians to ensure that they prepare an Advance Care Directive when they are healthy and have the capacity to do so. However, many of our supporters also have a keen interest in being able to make an advance request for medical assistance in dying (MAID), should they be diagnosed with a grievous and irremediable condition that may lead to a loss of capacity to provide informed consent.

There are many misconceptions about MAID and dementia. This panel discussion is intended to help dispel these misconceptions by providing information about the following topics:

Dr. Tanja Daws, a family physician in the Comox Valley, BC. She graduated from The University of Pretoria, South Africa. She was one of the first MAID providers in BC upon legalisation of MAID and is a founding member of The Canadian Association of MAID Assessors and Providers (CAMAP). She is a clinical instructor in Family Medicine at UBC, member of the Physician Advisory Council for DWD and is chair of one of the working groups for the development of a National MAID Curriculum.

Grace Pastine, a lawyer who for seven years has been the Litigation Director for the British Columbia Civil Liberties Association. She has directed over 90 interventions before the Supreme Court of Canada. She was a member of the trial team in Carter v. Canada, the case that decriminalized physician-assisted dying in Canada. She has taught law school courses as an adjunct professor at the University of British Columbia and the University of Victoria.

Mark Gervan, a retailer all his working life, has spent many years studying religion and its impact on humanity. He has had two MAID deaths in his immediate family and is a strong supporter of legislative change allowing individuals to die with dignity and compassion 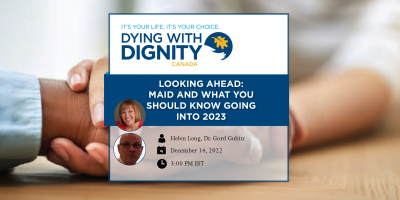 Looking Ahead: MAID and what you should know going into 2023

Looking Ahead: MAID and what you should know going into 2023 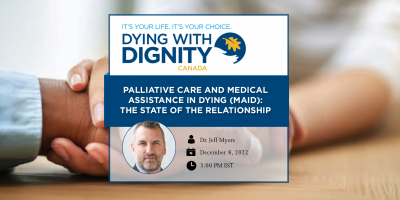 Palliative Care and Medical Assistance in Dying (MAID): The State of the Relationship

Palliative Care and Medical Assistance in Dying (MAID): The State of the Relationship 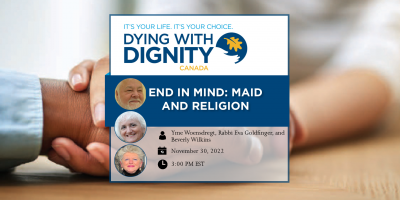 End in Mind: MAID and Religion

End in Mind: MAID and Religion