Why a Hamilton chapter coordinator chose to defend dignity in a big way.

Yvonne Cunnington has never been one to shy away from conversations about death and dying. Her husband, a physician, would often tell her about the experiences of patients that were at end of life.

Experiencing the deaths of both her parents was even more eye-opening for Yvonne. Both her parents had brain diseases: her father had Alzheimer’s disease and her mother had a brain tumour. “My father was very lucky to have my mother,” Yvonne says. “She was a wonderful caregiver.” 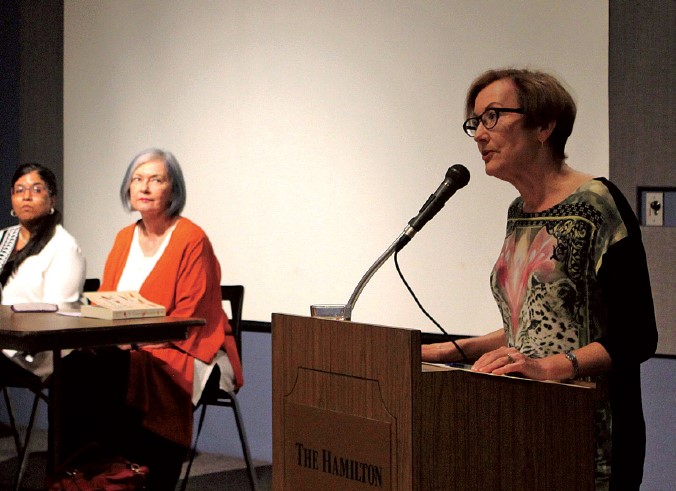 Yet despite the fact that her parents were familiar with death and dying — particularly her mother after she cared for Yvonne’s dying father — it struck her how uncomfortable they were discussing the topic.

“Over the years, it became clear to me that our culture doesn’t want to acknowledge death and dying, and that physicians were very good at prolonging life through any means necessary,” she muses.

A journalist by trade, Yvonne wanted to use her skills and connections to promote a conversation about choices in dying. She joined DWDC as a member in 2014 and became a core member of the upstart Hamilton chapter by the end of the following year.

“I wanted to encourage others to talk much more openly about death and dying,” says Yvonne, who has helped to organize advance care planning workshops and small-group “gentle conversations” about end-of-life choice.

Yvonne’s contributions to the cause have gone well beyond breaking down the stigma surrounding death and dying. Since Fall 2015, she has supported our operations through her membership in our Defenders of Dignity monthly-giving program. “I wanted to give monthly because I know that DWDC operates with a very small budget,” she says. “I thought it would be an easy way for me to help since monthly gifts are automatically deducted each month.”

If that wasn’t enough, Yvonne bowled us over at our 2016 Annual General Meeting in Toronto when she told us she wanted to triple the amount of her monthly contribution. She made her decision after CEO Shanaaz Gokool introduced each member of the organization’s staff to the crowd of supporters in attendance. “Shanaaz brought the team forward, and there was only about eight people!” she exclaims. “What the team is able to accomplish on basically peanuts compelled me to increase my monthly gift.”

‘This is a long-term job’

Like all of our Defenders of Dignity, Yvonne contributes on an ongoing basis because the work of defending Canadians’ end-of-life rights is far from over. “This is a long-term job. Rights can be given, and rights can be taken away. Even though we have a law, it’s not always going to work well. Some people will have major problems with access, while others are completely left out, like people with Alzheimer’s disease.”

While Yvonne’s contributions to the national organization have helped us expand our reach in 2017, she and her colleagues in the Hamilton chapter continue to make in-roads in their local community. An event they held on June 28 featured author Sandra Martin, who has written extensively about Canada’s right-to-die movement, and ethicist Andrea Frolic, who leads Hamilton Health Sciences’ medical assistance in dying (MAID) program, and DWDC CEO Shanaaz Gokool. More than 70 people were in attendance.

Thanks to the commitment of DWDC’s donors and volunteers across the country, Yvonne is optimistic that systems for MAID will run more smoothly in the near future than they are now. She also hopes that those in the medical community will be more accepting of MAID and that the law is expanded to include advance requests.

“I really hope that in a few years, because of the work we’re doing, our society can rethink how we approach end of life.”

To become a Defender of Dignity like Yvonne, or to make a donation in support of Dying With Dignity Canada, please call our office at 1-800-495-6156 or visit Dyingwithdignity.ca/donate.