Leaping into action, leading by example

Mere months after it formed, DWDC’s Victoria chapter is already a prominent voice in the national conversation on medical assistance in dying.

The timing was perfect.

It was December 17, 2015 when former Dying With Dignity Canada CEO Wanda Morris met with Ellen Agger, Jeffrey Brooks and John Priddle to talk about forming a Victoria chapter of DWDC. Each of us had solid experience with the issue: Ellen, a decades-long DWDC member, had been an active organizer with the Nova Scotia chapter; Jeffrey, who made oral and written presentations to Quebec’s Special Committee on Medical Aid in Dying in 2010, had been a palliative care volunteer in Montreal before moving to Victoria, where he continues this work; and John was, and continues to be, an active member of DWDC’s Disability Advisory Council. 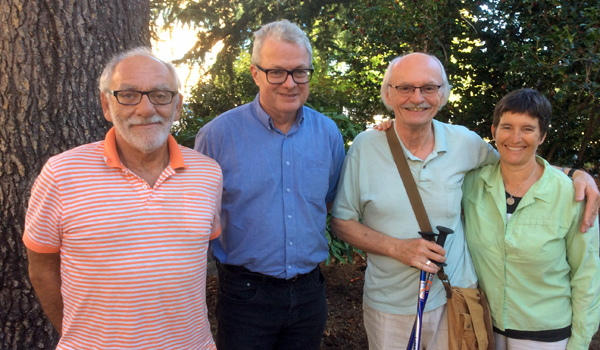 We clicked and decided to invite the 300-plus local DWDC supporters to a meeting in order to gauge interest in a Victoria chapter. The response was overwhelming: on January 17, 2016, 57 people came to our inaugural information session at the central library.

At that time, the national debate over creating a new assisted dying law was very dynamic. The Supreme Court had decided that week to delay the implementation of the Carter decision by four months, giving the Trudeau government additional time to prepare new legislation. So, at that first meeting, we provided updates about the latest news and had a lively discussion about various options and possible outcomes. Our chapter, now one of DWDC’s largest and most active, was off and running.

In February, we were captivated by the daily hearings of Parliament’s Special Joint Committee on Physician-Assisted Dying. Co-Vice Chair and Victoria MP Murray Rankin became an important ally for good legislation. We anxiously awaited their report, which came out on February 25, and Ellen spoke on behalf of our new chapter at Murray’s packed Town Hall meeting on March 5.

Meanwhile, we welcomed an addition to our chapter leadership group: Adrian Fine, a retired nephrologist and member of DWDC’s Physicians Advisory Council. A core group evolved to discuss the ever-changing status of federal legislation and what our chapter needed to do to ensure that any new laws be as good as possible. We expanded our outreach to all DWDC supporters on Vancouver Island and the Gulf Islands, and our numbers have since swelled to a total of more than 1,500 people.

We were amazed at the efforts our chapter put into advocating for patient-centred legislation. Our supporters wrote countless letters to the editor and op-ed articles; we did print and radio interviews; and we met with MLAs and MPs. As the local voice representing an increasingly influential national organization, we became the go-to group in Victoria on this issue.

As the debate over assisted dying legislation progressed, our individual voices were heard over and over. One volunteer, Laura Phelps, spoke eloquently and publicly, sharing her family’s personal story and gaining the ear of key MPs and senators. She produced several videos, in part as a tribute to her parents and grandmother, who died in terrible suffering. We find it so powerful when our own supporters are able to speak out about their very personal experiences with dying.

On June 17, 2016, Bill C-14, the federal government’s assisted dying law, received royal assent. It is not the bill we wanted, but it is the law we have. We do not believe it is constitutional and don’t think it satisfies the decision in Carter v. Canada. The BC Civil Liberties Association, the legal organization that spearheaded the Carter case, has already launched a new challenge in order to, in effect, “get Carter back.”

Our chapter focus is now changing. Bill C-14 affords access to terminally ill patients who are suffering intolerably. Now, our task is to ensure medical assistance in dying (MAID) is available in practice. We will work to ensure that patients are aware of their new rights, that they have timely and smooth access to information about MAID and to MAID itself, and that institutions have systems and trained staff in place to provide MAID with the least difficulty to the patient. To do this, we are working with local physicians offering MAID to support them in any way we can, meeting with Island Health and gathering information about where barriers to access exist.

—By Ellen Agger and Jeffrey Brooks