Paul’s story: How my wife was denied her end-of-life choice

In this powerful post for the Dying With Dignity Canada blog, Calgary’s Paul Morck opens up about his wife Barbara’s struggle to access her wish of a medically assisted death.

This is the story of my Barbie Doll’s battle with bladder cancer and our frustration with trying to access medical assistance in dying (MAID).

My wife, Barbara Ann Morck, died on December 7th, 2018 after an agonizing nine-month battle with cancer. We were married for almost 49 years (we got married on Valentine's Day 1970, which was a great day for a wedding because I never forgot our anniversary).

I called her my Barbie-Doll because she was the kindest, most caring person I have ever known. Anyone who met her immediately fell in love with her — and Barb loved everyone back. She especially loved kids and pets. She had a smile that would melt the coldest heart.

Barb loved to read, travel, and shop, shop, shop. In the mid-1990s, Barb decided to buy some Beanie Babies as an investment so we could become rich in retirement. I knew about her plan, but I didn’t know she had bought more than 300 of them. We paid $10 for each one and I’ll bet you can’t guess how much each one is worth now. That’s correct — $10.

At the end of February 2018, while vacationing in the Dominican Republic, Barb suddenly experienced pain in the right side of her back. As a Calgary paramedic for 40 years, I assumed she had pulled a muscle because she had a history of muscle spasms.

This new pain was controlled by Tylenol, but lingered. Near the end of March, while we were still in the Dominican Republic, Barb collapsed and was taken to a tourist hospital by ambulance. After multiple tests, the doctor diagnosed dehydration. Her creatinine levels were a little high, so the doctor suggested Barb get her kidneys checked the next week upon our return to Calgary. 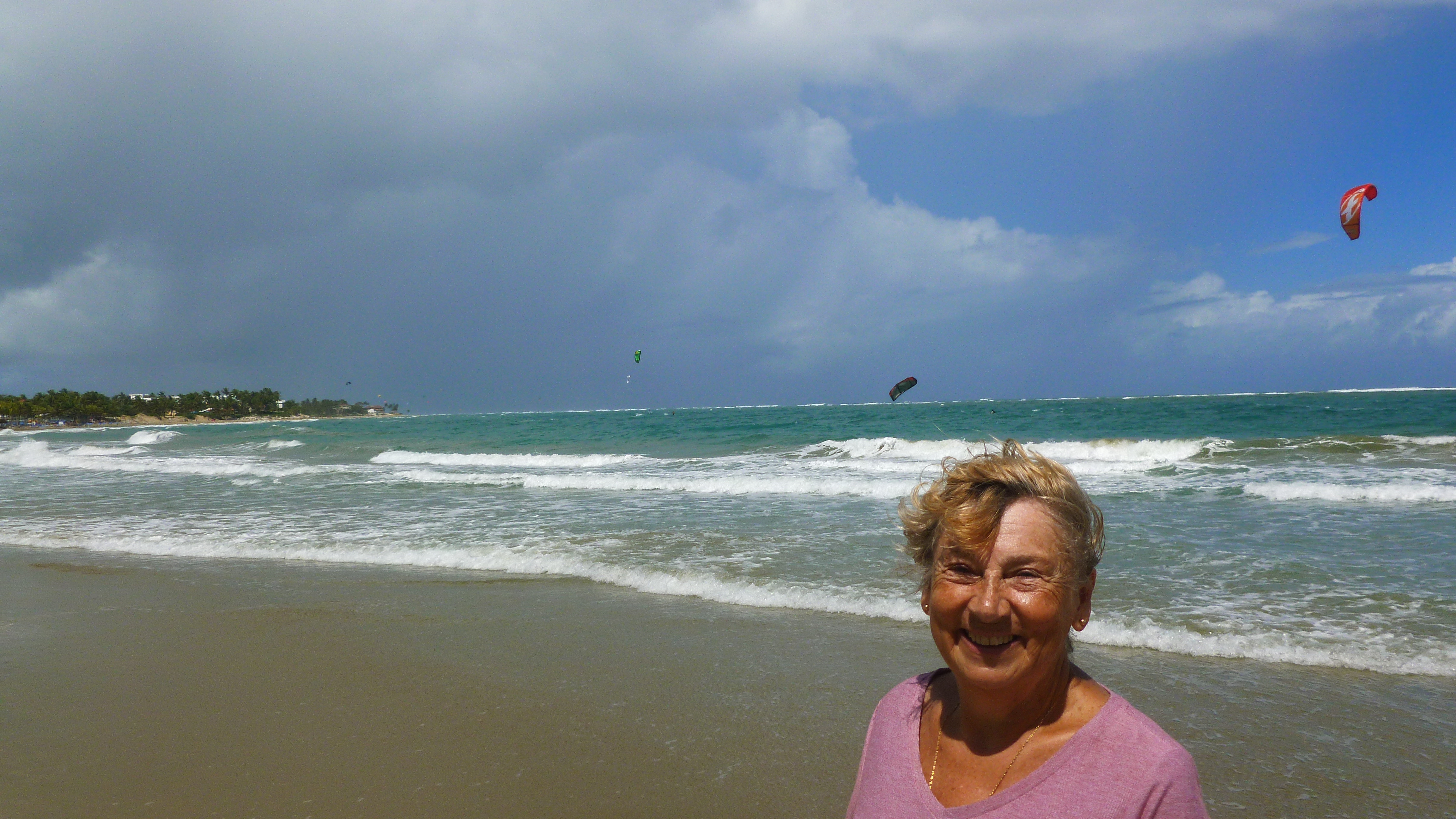 Barb on her favourite beach.

The day after we returned, Barb’s doctor referred her to a nephrologist (kidney doctor), who ordered a biopsy of her right kidney the next week. But the radiologist had to biopsy the left kidney because the right kidney was full of urine.

Then suddenly Barb stopped passing urine and pain returned intensely. At Emergency, her creatinine levels tested off the top of the scale, showing complete kidney failure. Her left kidney had quit. Her right kidney was full of urine. Through a needle catheter inserted into her right kidney, she started passing urine again. We were then informed that the biopsy of Barb’s right ureter blockage was malignant. My Barbie-Doll had cancer.

"A cruel game of Whack-a-Mole"

Her nine-month battle with cancer was like a cruel game of Whack-a-Mole. Something would pop up and we would beat it down. Things would look promising for a few days, and then, something else would pop up.

During this time, Barb was subjected to about 200 doctor interviews (as many as 10 a day), at least 50 diagnostic tests, and about 10 surgical procedures, including the insertion of stints in both ureters and the removal of her right kidney and ureter. She was in and out of hospitals so many times I can’t even count the days. The pain continued to worsen as the cancer spread, and she was given pain medication that sometimes made her confused.

Since Barb had only one weak kidney, they were unable to do contract dye CTs on her. As a result, no one was sure where the cancer was. They did know, however, that the cancer had spread to at least three areas: her right kidney region (where it started), her left shoulder region, and around the outside of her lower colon. Barb’s worst pain and swelling was located around her rectum, causing her to feel like she had to go to the bathroom frequently. 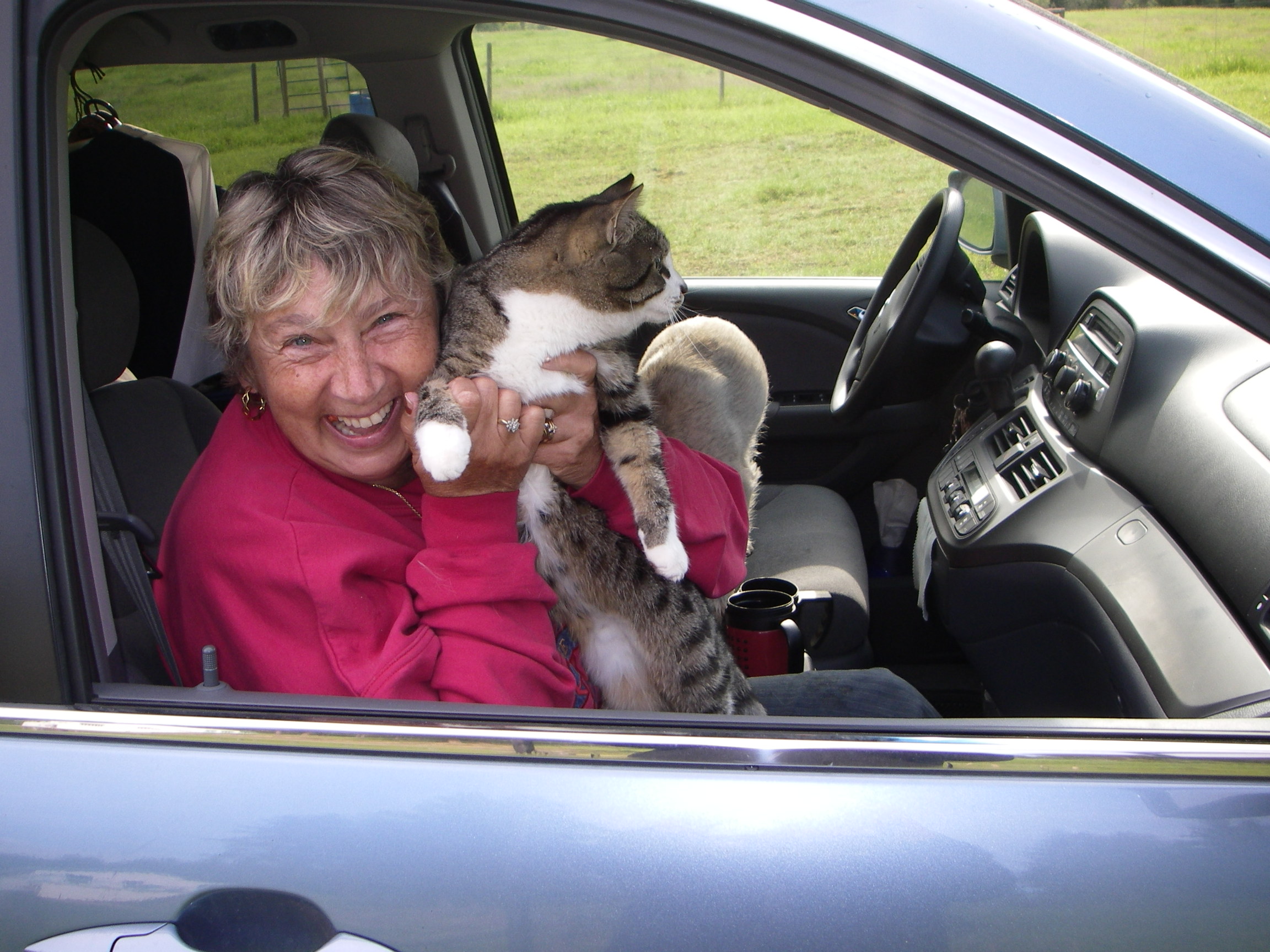 Unfortunately, while in the palliative care ward to get her pain under control, Barb started vomiting up everything she ate. More weeks of testing finally showed that the cancer had spread to the middle of her chest, blocking the bottom of her stomach. She would need a feeding tube.

At this point, Barb made the difficult decision to stop all further treatment. She was done fighting. She said she just "wanted to die with dignity." Those were Barb’s words. At that point, neither of us had heard of the organization Dying With Dignity Canada.

But I had a plan. I knew that MAID was now available to Canadians suffering intolerably with a grievous and irremediable medical condition. Barb and I talked at length about allowing the doctors to put in the feeding tube to keep her fed and to start an IV to keep her hydrated so we could take her home and have her get stronger while we applied for MAID and waited. That way, while we waited at home, she could say goodbye to her beloved family and friends. She could also choose who would be with her when she passed. I thought it was a great plan.

The day we filled out the MAID application, I brought two of our friends in to be independent witnesses, a requirement under the law. Barb thanked them for coming and asked if they were morally or ethically OK with her applying for assisted dying. They both supported Barb’s choice.

I submitted the application via fax and received a call from the MAID navigator within two hours. She told us our application was complete and our first assessment would be happening within a couple of hours. We were so excited. 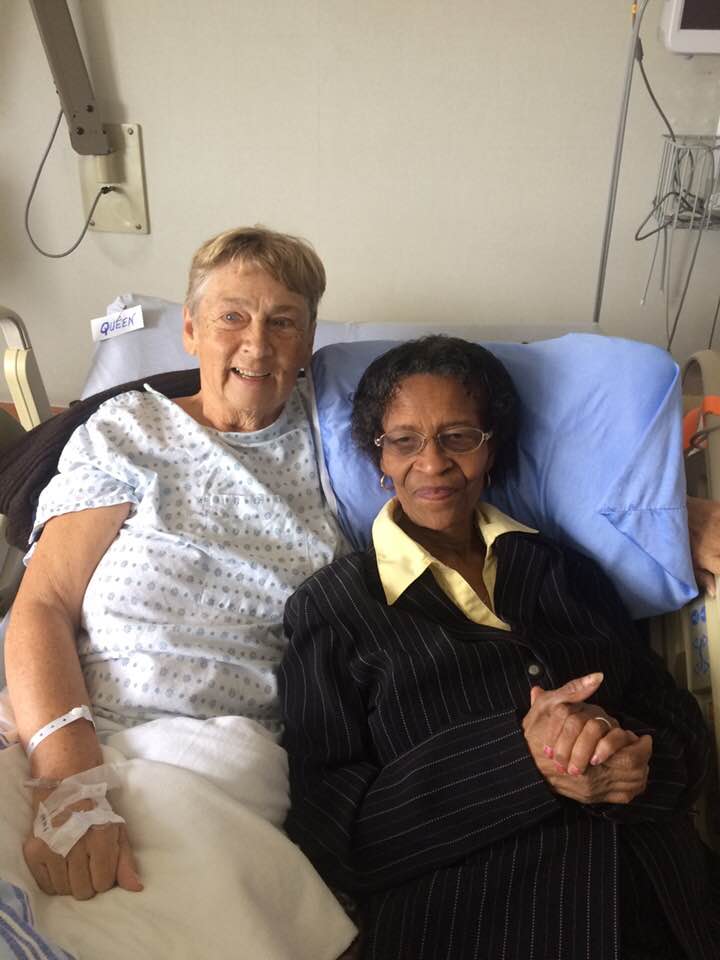 Barb and her beloved neighbour Joan in Nov. 2018.

In the meantime, a hospital psychiatrist, who had nothing to do with Barb's MAID application, stopped by to see Barb. As usual, Barb was on the way to the bathroom. The psychiatrist requested that Barb return to her bed so they could talk. After asking Barb four or five questions, Barb demanded she be allowed to go to the bathroom, promising to call for them when she was finished.

Unfortunately, the psychiatrist decided she couldn’t wait and that Barb was too confused for MAID. She coincidentally ran into the MAID assessment physician at the nurse’s station and told him not to bother with his assessment of Barb. By the time Barb was done in the bathroom, they were all gone.

Barb didn’t even get one MAID assessment. The MAID team also didn’t even call me to tell me Barb was not assessed. Instead, I received a phone call from the psychiatric nurse about an hour after they met with Barb, telling me of their decision. She said we could reapply in 10 days.

Barb was irate. She demanded the nursing staff remove her feeding tube and IV immediately. Ironically they complied, even though she had just been deemed mentally incompetent only moments earlier. How could Barb have been deemed incompetent to apply for MAID, but considered competent to make these significant healthcare decisions?

Barb was allowed to starve, suffering for several more weeks before dying. She was not allowed to die with dignity on her own terms. As her medical advocate, I was allowed to starve my wife to death. If I had done this to my dog, I would be in jail right now. I had to watch my Barbie-Doll die slowly and painfully for two weeks. How is that right?

The MAID legislation needs to be amended to ensure fairer access for suffering Canadians at risk of losing capacity. Many people with terminal cancers, for example, are usually on opioid pain medications, and many can’t qualify for MAID because they can’t pass the required mental competency requirements. (Under the law, a person must have capacity both at the time of the MAID request and the procedure.) 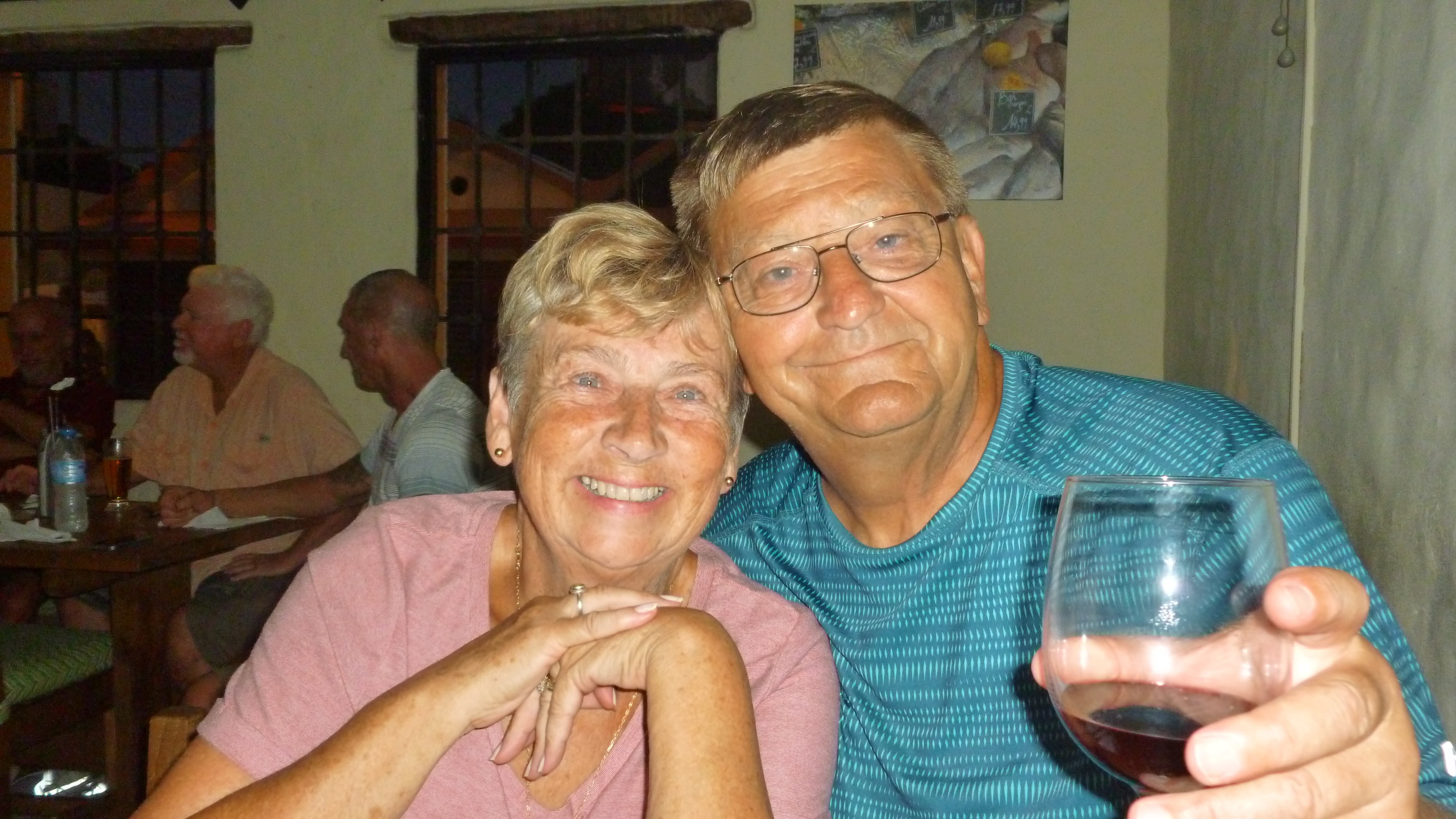 Barb didn’t want a funeral or memorial. People are so sad and they cry too much. She wanted a rock-and-roll party where everyone could dance and laugh. We held Barb’s Morck Mash on March 31, 2019 (Barb requested that it be hosted later in the spring because it would be safer for people to travel). It was a booming success with almost 200 people dressed in their best 1950s outfit. We started the night with the Beach Boys' song "Barbara Ann."

After Barb was denied MAID, I promised her that I would fight to amend the legislation that requires patients to be mentally competent prior to applying for MAID and at the time of administration.

In late February, my brother sent me a link to the organization Dying With Dignity Canada. Their goals closely align with mine, so I decided to sell Barbie Doll’s Beanie Babies at her celebration of life and to donate the proceeds to Dying With Dignity Canada. To date, we have raised more than $2,300 for the organization, which is working tirelessly to ensure that Canada's assisted dying legislation is compliant with the Constitution and our Charter of Rights and Freedoms. Several of our friends and family have also donated in Barb’s name.

Because I promised Barb I would fight to change this legislation, I joined Dying With Dignity Canada. I encourage all of you to get involved, too. Talk to your family and friends and your politicians. Please share my Barbie Doll’s story, so we can change things for the future.

Dying With Dignity Canada is immensely grateful to Paul Morck for sharing his Barbie-Doll's heartbreaking and important story.

Join us in taking a stand: Tell your candidates to commit to restoring the rights of Canadians who are actively discriminated against under Canada’s inadequate assisted dying law