Monica’s mother, Laura Jones, chose to access medical assistance in dying (MAID) on January 24, 2019 at her home in Saskatoon. She was 99. This three-part story, shared by Monica, aims to help improve the experience of accessing MAID for others in the future. If you haven’t read Part 1, you can find it by clicking here.

We left the office and Mary Lou went ahead to bring the car to the door of the clinic. Mom and I made our way slowly to the elevator, with her leaning on her walker. The clinic was quiet and dark. As we waited for the elevator, the young nurse came up to us and apologized. She could see how despondent we were. She was the person Mary Lou had made the appointment with, and who had scheduled an hour for the visit. She understood the situation and took it seriously. She knew the clinic had let us down.

There was not much conversation on the drive home. I felt horrible, thinking I had promised Mom something and that I was not able to deliver.

But it turned out the doctor did make the calls she promised to make, and she phoned Mary Lou later that evening. She let us know that another doctor would be getting in touch soon.

After the doctor let us know that she had arranged for another doctor to get in touch, Don and her sister-in-law Roberta drove up to Saskatoon from Regina the next day. We were still up in the air. Roberta is a funeral director who, at that point, had personal experience with six or seven people who had accessed MAID. She had a private conversation with Laura and then everyone in the house gathered round the kitchen table. Mom was asked if she was okay to wait for the other doctor or if she wanted to go to Emergency. Roberta also completed the funeral documents with Mom, including gathering all the vital statistics needed.

Don and Roberta left midafternoon to drive back to Regina to get home before dark. Don remembers the disappointment and sense of responsibility she felt leaving Mary Lou and me to deal with the uncertainty. Later that afternoon, Mary Lou called to say she had heard from Dr. Rob Weiler, one of the few MAID providers in Saskatoon. He was out of town but rang the doorbell the next morning at 8:45 a.m.

Dr. Weiler spent time getting to know Laura, and they had an instant rapport. He left us with another copy of the most recent version of the application form and told us to contact him as soon as it was filled out and witnessed. The 10-day reflection period would start then.

It was the coldest winter in over a hundred years on the prairies. Who were we going to ask to witness? Rather than ask friends to drive over, Mary Lou and I went knocking on the doors of Laura’s neighbours. The first one refused, saying she did not agree. We said we understood. The two neighbours across the street said they would gladly be the witnesses, but they were both too sick. At the third and fourth door, the people agreed, and the time was set for 7 p.m. Tuesday January 8.

In the meantime, all of Laura’s appointments were cancelled: her physio for her shoulder, the regular injections in her eyes, and dental.

Bruce and Ron, the witnesses, arrived on Tuesday evening. They sat at the kitchen table with Laura, Mary Lou and me and visited before and after the application was filled out and witnessed.

Dr. Weiler came by the next day to retrieve the application, and he gave us confidence that it would be approved. He came several more times to check in, offer alternatives. and to see how Laura was doing. The first words out of Mom’s mouth every time she saw him were, “I haven’t changed my mind.” Dr. Lilian Thorpe was the other MAID provider and she came by once.

Finally, Laura’s application was approved. It was the weight of the world lifting from her shoulders. And as the Dilantin exited from her system, her head cleared.

I drew up a schedule to fit in all the people who wanted to visit, spreading them out as much as possible to make sure Laura did not get too tired. People came from Seattle, Nanaimo, Victoria, Calgary, Kimberley, Regina, Prince Albert, Zealandia (our farming community) and, of course, Saskatoon. This included the rest of the out-of-town grandchildren. Her regular Christmas visitors from Montreal and her grandson Zak from Halifax had said their good-byes earlier, knowing what Laura’s intentions were. 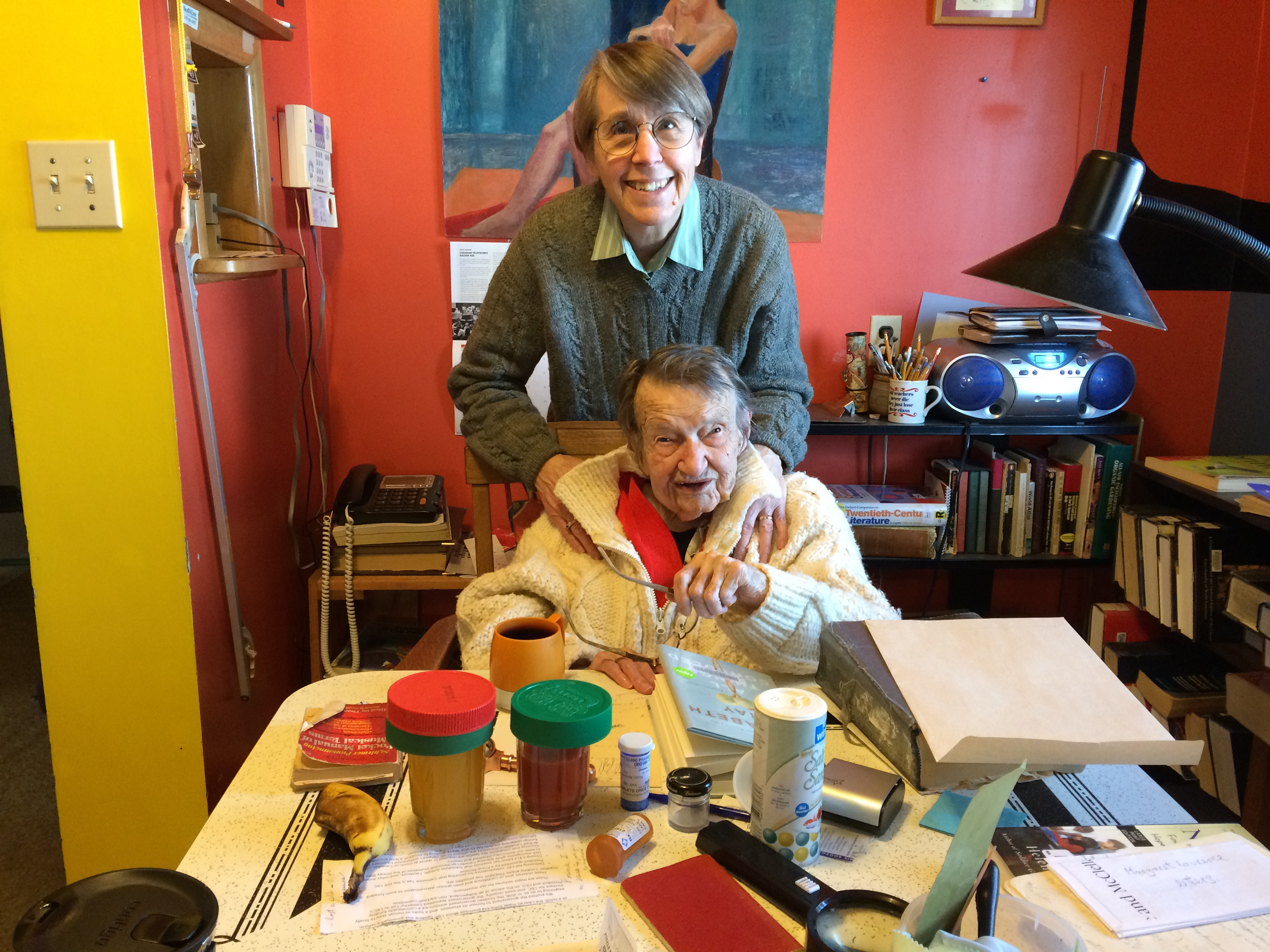 Catherine Winter, from Victoria, one of many visitors who came to spend time during the last month.

There was an assumption — among some of her daughters ­­— that January 18th would be the day, as it was 10 days from her approval. But one morning, around the 10th or 11th, she looked up at me from across the breakfast table and said, “January 24th.” I said, “I thought it might be.” January 24 was the date her first child Sheila was born.

This caused some turmoil. Don had gone back home to Regina. She was deep in plans for her daughter’s wedding in February. Pat had been traveling and had much less time to process what was happening. She was struggling to catch up with the pace of events and she was not sure she wanted to be there on the day of the MAID.

There was also concern that choosing to die on Sheila’s birthday would add more sad significance to that date, particularly for Sheila’s sons.

But Laura was determined and focused and we all came to support her choice.

On the afternoon of January 19th Laura woke up from her nap. She and I were in recliners in the living room. She looked at me and after a few moments started talking. But the sounds were not coherent. I moved closer and we stared into each other’s eyes. She started talking again but not words.

The family rushed to her side – by this time some words were taking shape, but they were slurred. When Mary Lou arrived, she asked Laura if she knew who she was. Laura, frustrated, shouted of course she did. “Can you say my name?” Mary Lou asked. Laura insisted she knew Mary Lou, but could not come up with her name.

Kevin remained with Laura while Mary Lou phoned the clinic and I phoned Dr. Weiler, who connected us with geriatric psychiatrist Dr. Lilian Thorpe. Dr. Thorpe explained over the phone that she was pretty sure Laura had not had a stroke. She advised that we try to convince Laura to start taking the Dilantin again. Within the hour Laura had her speech back.

Dr. Weiler called back and offered to come the next day, January 20, to administer MAID.  Drs. Weiler and Thorpe thought there was little danger of Laura losing capacity. But it was up to us, and of course, primarily Laura, to decide. There was some talk that if she could not speak, she could write to give consent, and we practiced that.

You can read Part 3, the final part of Laura and her family’s story, by clicking here.

The header photo is of the last annual tea Laura hosted for retired librarians. It took place when Catherine Winter visited every spring. Photo: Lois Davidson