Marion’s story: Why I want advance requests for assisted dying

Posted by Dying With Dignity Canada on October 08, 2019

In this moving testimonial, British Columbia’s Marion Janssen recounts the end-of-life experiences of her grandparents and parents. After watching three loved ones — her mother, father, and grandmother — suffer with dementia, Marion knows she does not want the same ending for herself. That’s why, she writes, she believes advance requests for assisted dying must be allowed.

My parents and I had often spoken about living life to the fullest and not wanting to die suffering. Many years ago, my grandparents passed away. My grandfather Bill was a feisty gentleman — a baker by trade, who had a heart attack at the age of 90. At that point, we were asked if we wanted to put him on life support. He had led a good life and we made the decision to let him die with dignity of natural causes. He slipped away, peacefully with his daughters by his side.

Unfortunately, my other loved ones haven’t been so lucky.

When my grandfather died, he left behind my grandmother, who was 85 years old and unable to care for herself due to a stroke she had suffered during the birth of her second daughter. After his death, she had to be moved to a nursing home, where age-related dementia took her from us. We watched as she suffered. She was angry that she had ended up like this. During this time, my parents both told me that they would not want their final years to be in a suffering state. They told me they would want me to do something so that they would not be moved into a nursing home to die. At the time, I joked with them that if I did, I would then be sent to jail. 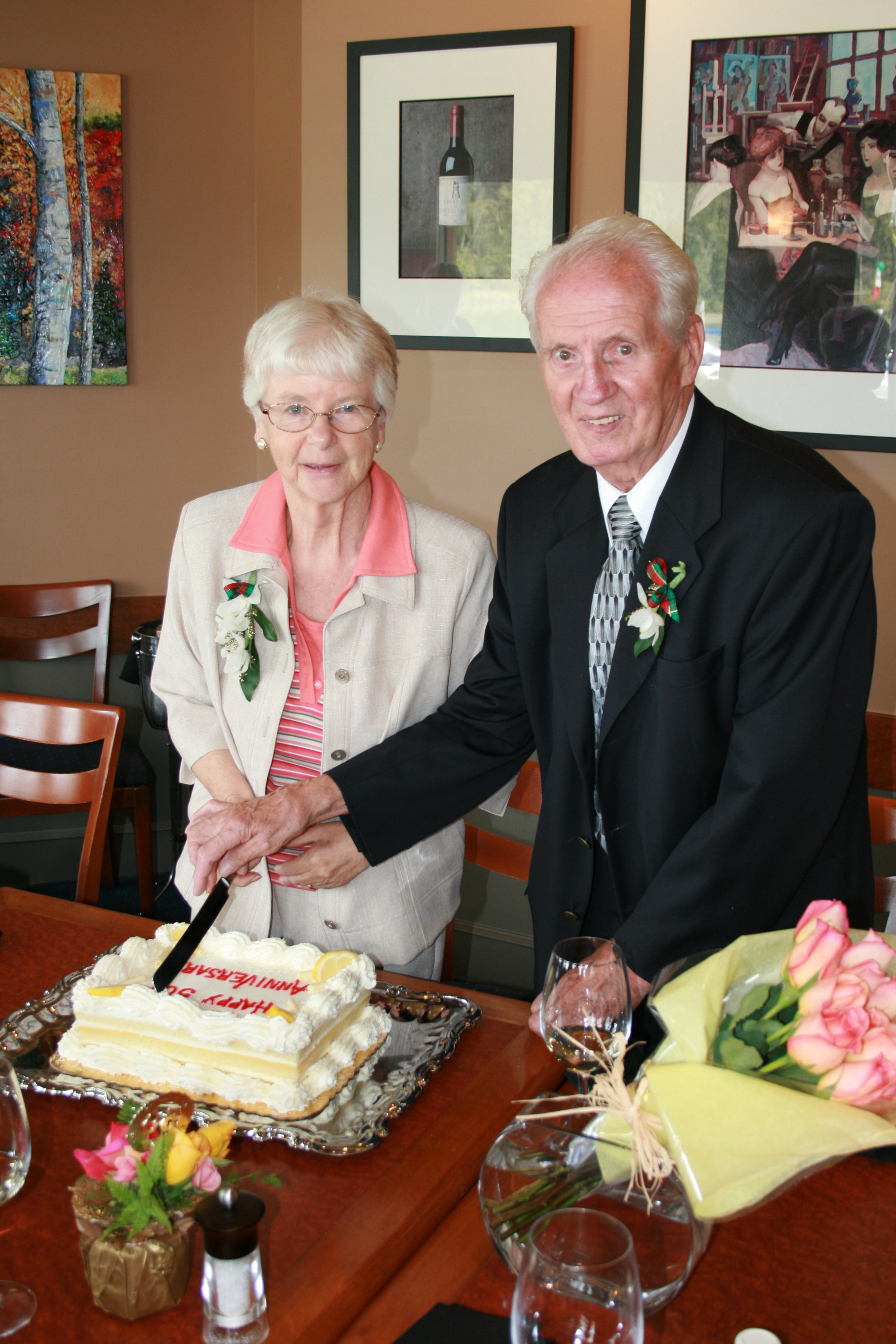 Marion's mum and dad, Mary and Adam Campbell, on their anniversary.

My parents had a great life. They were immigrants from Scotland, who loved to travel and had an active life in Vancouver, raising my brother and me. In their retirement years, they joined both a lawn bowling club and their local senior centre. They were also devoted to my brother and me and our families.

My Mum loved to gamble, and she and my aunt would play blackjack, pai gow, or the slots a couple of times a week at the local casino. This was often followed by lunch and a cup of tea. This regular cup of tea was what signaled to her and to us that she had a medical issue, because she started to spill the tea as the result of a slight shake in her left hand. After medical appointments, she was diagnosed with Parkinson’s disease.

At the time, we didn’t know much about this disease, and 15 years ago we weren’t as active on the internet so we couldn’t just go online to see what the prognosis would be. Mum started to see specialists and take medication. She seemed fine for the first eight years living with Parkinson’s. She was active but her weight started to decrease and her shaking increased.

In 2006, a decision was made to have my parents move closer to me because I had a young family and my own business, and I wanted to be able to support them. Mum started to lose her confidence and would often cry and say, “Why me?” She became a different person, who went from interacting with friends all over the world, being active, feisty, and always up for adventure, to wanting to just stay home. My Dad told me that he could care for her at home and we would hire a care aid to help with her personal needs. She stopped cooking and Dad took over.

'Don't ever let this happen to me'

For the next few years they did just fine. However, one night in November 2013, Dad called me in tears and said he could no longer look after her. She was soiling herself, had stopped communicating, and was mostly sleeping all day. It was agreed that she would be moved to a care home. That winter was tough as we were put on several waiting lists. We made it through Christmas, and then in February 2014, the call came that Mum had fallen and Dad couldn’t get her up. He also had fallen trying to help her and hit his head. Her fall resulted in a broken hip, surgery, and a move to a nursing home. 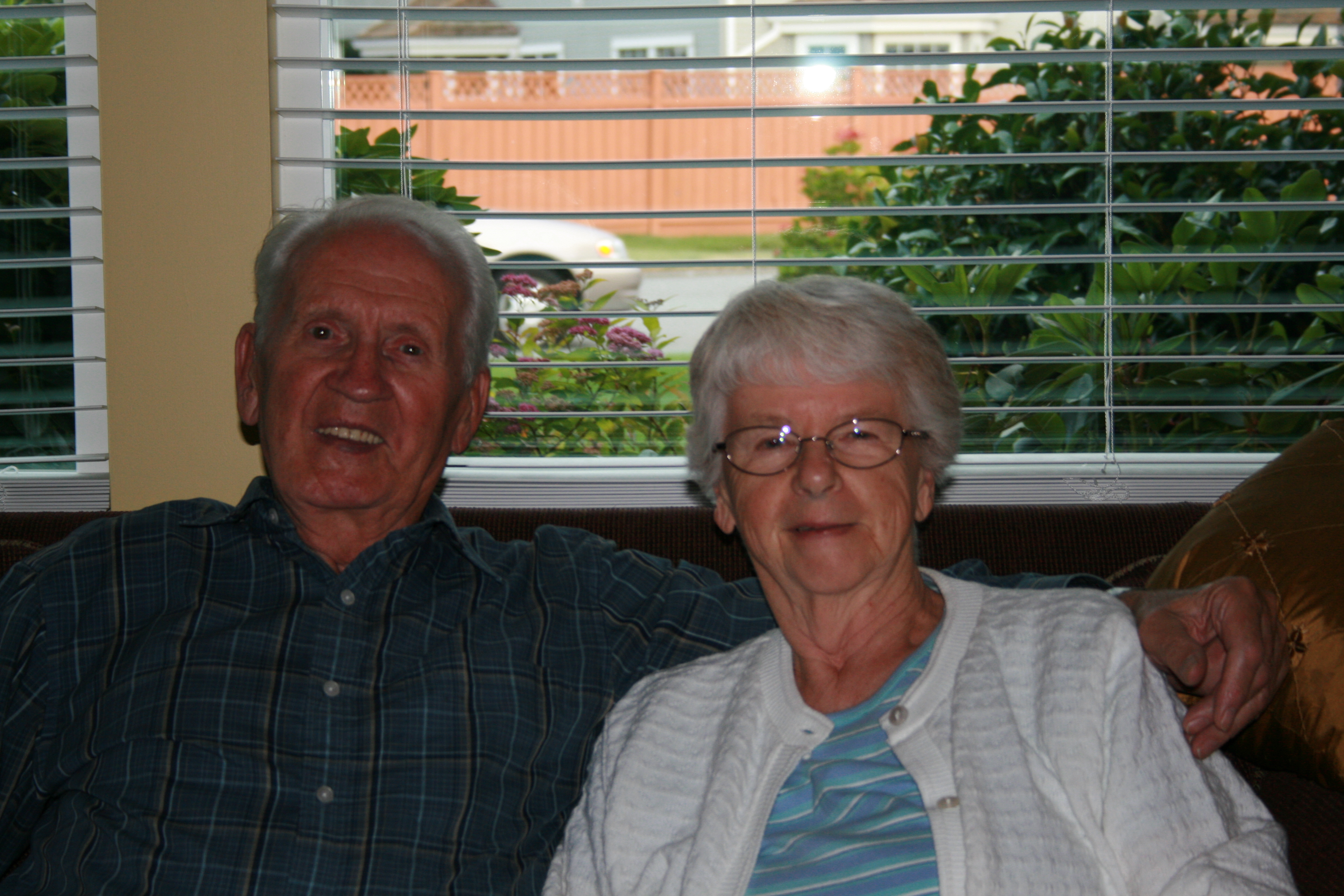 Mum’s Parkinson’s-related dementia — Lewy body dementia — worsened significantly and for the next year she was a different person. She was angry and non-communicative, and her behaviour was so unlike her. She had always been well mannered, well dressed, and so interested in others. Her final months were horrific because she could not eat, her front teeth fell out, and she dropped to a mere 77 lbs.

In May 2014, Mum was diagnosed with pneumonia. Although we had an advanced medical directive to only provide comfort care, the nurses wanted to treat the pneumonia. I said “no,” and was questioned about whether I realized that this would mean she would die. I had to request that the doctor be called to prevent the antibiotics from being administered. We then sat and waited for five days and watched Mum starve to death before taking her final breath. All the while, my heartbroken father was saying to me, “Don’t ever let this happen to me.”

Fast forward four years later as my Dad approached his 90th birthday. A lot had changed in the country since Mum’s passing. Medical assistance in dying became legal in Canada in June 2016, which was a fantastic first step, although the option of making a request for assisted dying in advance has not been permitted.

But while things were changing in Canada, life was getting bleaker for my Dad, who was no longer able to care for himself as a result of age-related dementia. He was found to be microwaving his metal tea pot, losing his keys weekly, and becoming paranoid that he was living in the wrong house and would be arrested. He was moved to a nursing home, where he was placed in a ward with “wanderers” and locked in.

My Dad, who had been in the British Merchant Navy, went back to his previous life and was convinced he now lived on his ship. He was reasonably happy, the staff were wonderful to him, and I visited him five days a week. But each time broke my heart after seeing all of the helpless people in his care home. So many of them were lost and reaching out to me to help them as I walked down the long corridor to where my Dad lived. It was not what he wanted, and I suspect that many of his fellow residents also wouldn’t have wanted to live that way either. 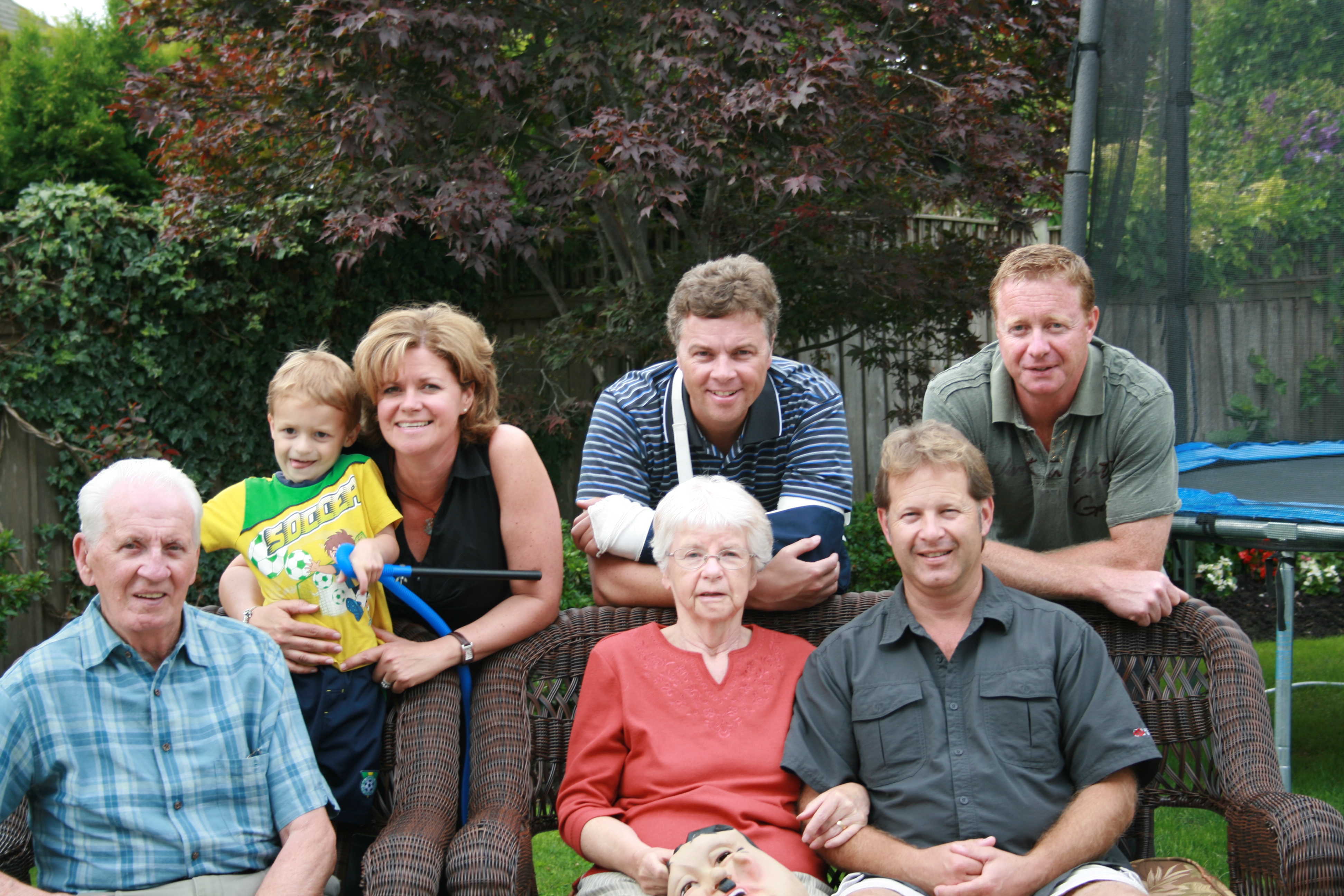 This photo was taken at the beginning of Mary's decline. Adam is in the blue shirt on the far left, while Marion is in the back with her son Reid, who was Adam and Mary's only grandchild at the time.

Finally, after one year in the care home and after three especially difficult months, including 10 days of him in a vegetative state on hydromorphone, Dad slipped away on January 22, 2019. I knew he would not have wanted to die this way. This really should have been his legal decision; however, under the current legislation, my Dad was unable to make an advance request for medical assistance in dying. Therefore, he suffered, as did we.

I now find myself reflecting back on the journey of my grandparents and parents. I know that I do not want to live my final years putting my children through this heart-wrenching suffering of dementia or Alzheimer’s disease.

At the age of 55 years old, I would like to put a plan in place to come into effect if I am diagnosed with dementia or Alzheimer’s disease. I would like to form a committee of five people: my two sons, a medical and legal advocate, and a family friend. I would clearly spell out that if there is no prognosis for improvement and I can no longer care for myself, am in a diaper, or do not know who my children are, I want them to unanimously decide to throw me a farewell party and assist me in my death. I do not want to commit suicide; I want medical assistance with my death.

The Canadian government has come a long way with granting the wishes of those who choose assisted dying due to grievous and irremediable illness, but by prohibiting advance requests for assisted dying, far too many people with conditions like Alzheimer’s will be denied a dignified death. I fully support Dying With Dignity Canada as they advocate for changes to the law so that it complies with our Canadian Constitution and Charter. I support change.

Dying With Dignity Canada extends heartfelt thanks to Marion for sharing her family’s heartbreaking story in an effort to spark change.

The decision not to allow suffering Canadians to make advance requests for assisted dying has created challenges for some individuals who want to exercise their right to die with the help of a clinician. It also threatens to discriminate against people whose medical conditions will rob them of mental capacity as a matter of course.

Join us in taking a stand: Tell your candidates to commit to restoring the rights of Canadians who are actively discriminated against under Canada’s inadequate assisted dying law