DWD Canada has expressed repeated concerns about the credibility of the panel, which was tasked to study the issue and report back to Parliament on possible options for federal legislation. Two of the committee’s three members, including chair Harvey Chochinov, had testified in court against the right to physician assisted dying prior to the Supreme Court’s decision in Carter v. Canada.

Now, a new independent report suggests the panel’s online survey — currently the only tool in its arsenal to consult ordinary Canadians about their views on end-of-life choice — is “biased and ambiguous” and thus unlikely to produce results that reflect actual public sentiment on physician assisted dying. The findings pose a serious dilemma for the Trudeau government, which has vowed an evidence-based approach to public policy-making.

Earlier this fall, DWD Canada commissioned researcher Geordie McRuer, a PhD with the Rotman School of Management who has a background in survey methodology, to provide an independent analysis of the External Panel’s “Issues Book” on physician assisted dying. He examined several factors — including the survey’s design and the makeup of the population that’s likely to respond — that could influence the reliability of the results.

Here are some of the key findings he delivered in his final report: 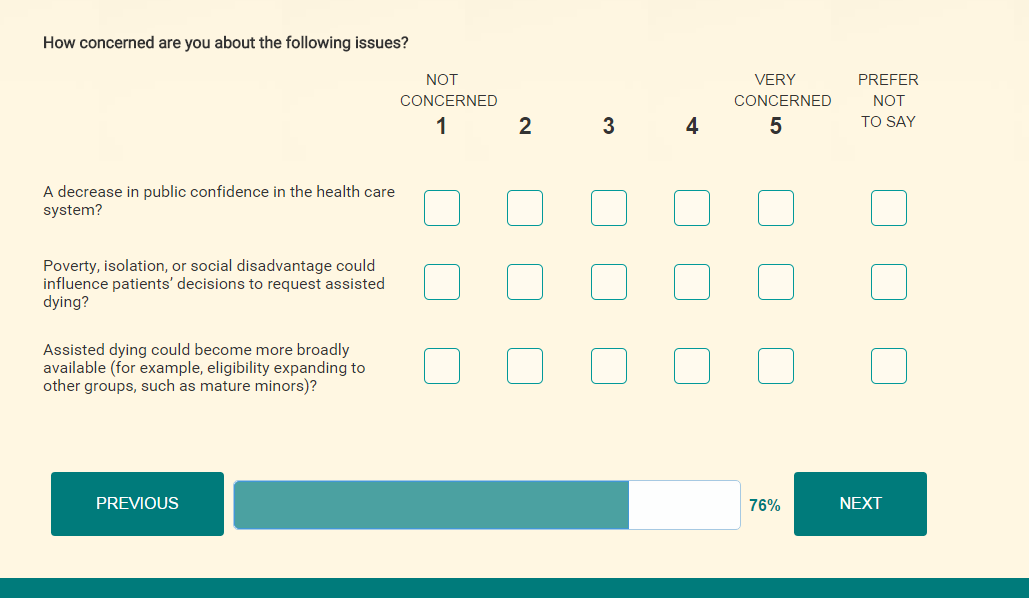 McRuer says many of the questions in the Issue Book are ambiguous and could be interpreted in several different ways.

“The problem with these questions is that they are actually asking two questions at once,” McRuer points out. Respondents could reasonably believe they’re being asked about the severity of the risk (ie. the degree to which they believe the feared outcome is negative or harmful), the likelihood of this risk occurring, or both at the same time. “Therefore,” McRuer writes, "[one’s] level of ‘concern’ is very difficult to judge. I honestly do not know if I would respond to that question with 1, 5, or something in between. It might swing from one extreme to the other depending on the day.”

In his concluding summary, McRuer describes the Issues Book as a “missed opportunity.” He calls the desire to consult the Canadian public “laudable” but says he has “serious doubts” about whether the data collected will be useful to lawmakers going forward.

“There are so many problems with the Issues Book that I do not think that the data can be meaningfully interpreted,” McRuer writes. “The sample of people who were recruited as respondents can tell us nothing about the attitudes of the average Canadian, and the content of the survey is ambiguous and biased.

“In conclusion, I recommend that the results from this survey have little or no influence on legislation that pertains to doctor-assisted dying.”