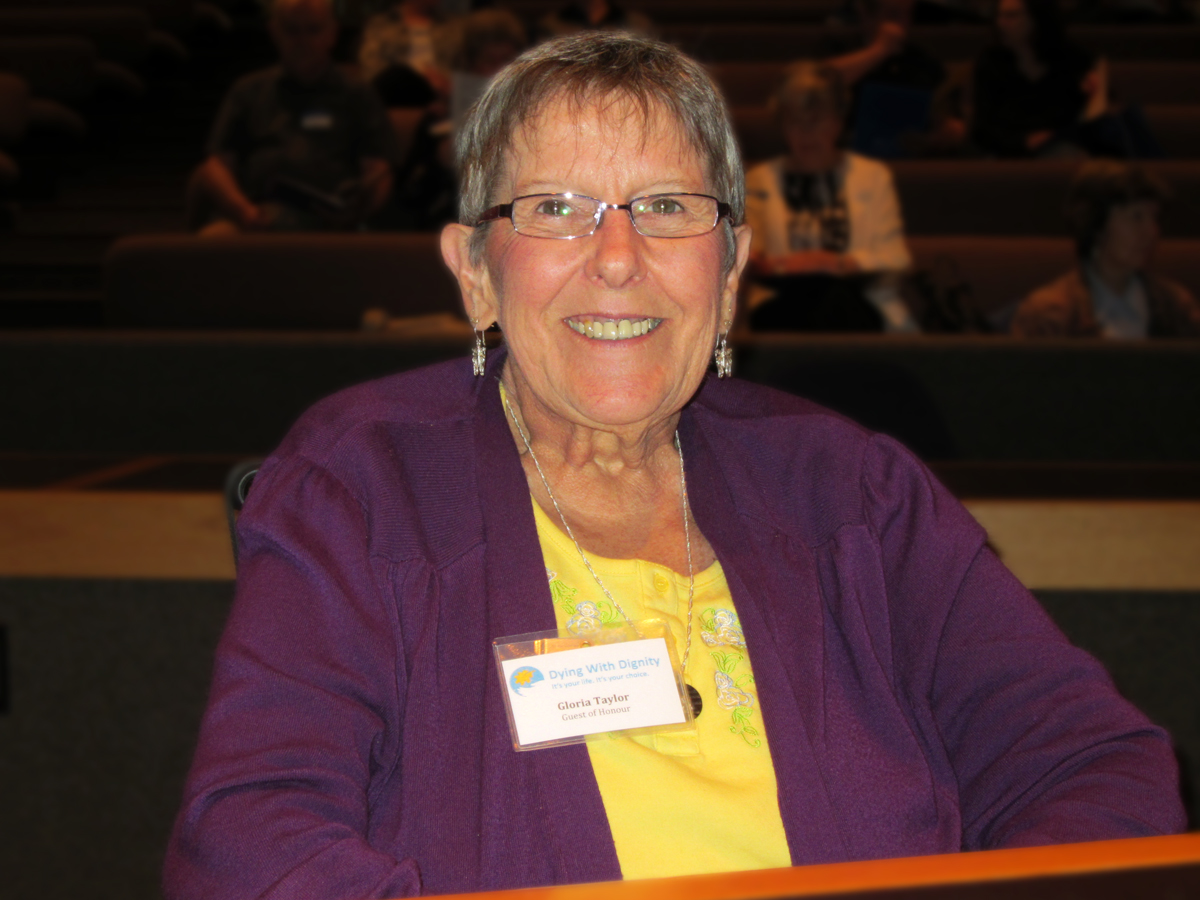 Gloria Taylor was a pioneer. She was the first person in Canada to win the right to die with help of a doctor. And she led the charge to make the right to a peaceful death a reality for the rest of us.

Gloria was born and raised in Castlegar, B.C. and lived most of her life in Westbank, not far from Kelowna. In her professional life, she worked as a postal worker and a residential care worker. Ever outspoken and free-spirited she, volunteered as health advocate and spent evenings and weekends riding motorbikes with her friends and family.

Gloria was 61 years old when her doctor told her she had ALS. The doctor told Gloria that the disease would likely paralyze her within six months, and would kill her within a year. Gloria outlived that — she survived three additional years. During that time, she waged a public fight to die on her own terms. She was the lead plaintiff in the Carter v. Attorney General of Canada, suing the government to give grievously ill patients the right to end their lives with the help of a physician.

With the help of the B.C. Civil Liberties Association, Gloria became the first Canadian ever to win the right to ask a doctor for help in dying. When her lawyers called Gloria to share the news of her legal victory at the B.C. Supreme Court, she cried, “Thank you, God.” Holding up a cup in a toast to her late friend who died agonizingly from ALS, Gloria added, “This one’s for you, Peter. We bloody did it!”

Her comments for the public were more staid but no less powerful. “I am dying,” she said in a statement to the press. “I do not want to, but I am going to die; that is a fact. I can accept death because I recognize it as a part of life. What I fear is a death that negates, as opposed to concludes, my life.”

In the end, Gloria did not have to ask a doctor for help to die peacefully. She died suddenly and unexpectedly from an infection in 2012. Her family members, including her mother, Anne Fomenoff of Castlegar, B.C., and her eldest son, Jason Taylor, of Kelowna, B.C., carried on Gloria’s work in her honour.

After she died, the B.C. Court of Appeal overturned the earlier ruling. But Gloria’s crusade was not in vain. In 2014, the Supreme Court of Canada agreed to hear arguments in Carter v. Canada. And on Feb. 6, 2015, it made history by striking down the Criminal Code prohibition on physician assisted dying.

Soon, we will live in a Canada where incurably, intolerably ill patients will have the choice to end their suffering in a humane and dignified manner. We will have Gloria to thank for helping to transform this age-old dream into a compassionate reality.

(With files from the B.C. Civil Liberties Association)