Looking forward: The future of MAID in Canada

In February 2020, the federal government tabled Bill C-7 in response to Truchon v. Attorney General of Canada – a moment which brought hope to suffering Canadians who want access to MAID but have been excluded.

Under Bill C-7, those whose death is not reasonably foreseeable and those who have been assessed and approved for MAID but have lost capacity to consent (Audrey’s Amendment) would be eligible for medical assistance in dying.

On September 30, James Cowan, Helen Long, and Puneet Luthra from DWDC talked viewers through the major changes proposed in Bill C-7, the current status of legislation in parliament, the long-awaited parliamentary review of MAID, and what comes next. Attendees walked away from this webinar with a thorough understanding of MAID in Canada, and actionable steps they could take to advocate for timely changes.

On September 30, 2020, James Cowan, Helen Long, and Puneet Luthra from Dying With Dignity Canada presented a webinar on the topic of medical assistance in dying (MAID). Their discussion included an overview of the major changes proposed in Bill C-7, the current status of legislation in parliament, the long-awaited parliamentary review of MAID, and what comes next. This blog post summarizes some of the key takeaways from that presentation.

The right to access MAID in Canada dates back to February 2015. In Carter v Canada (Attorney General), the Supreme Court of Canada made a unanimous decision that prohibiting physician-assisted dying was unconstitutional, and that it violated the Canadian Charter of Rights and Freedoms. As a result, Bill C-14 was passed. The federal legislation on medical assistance in dying was enacted on June 17, 2016.

Following this decision, Jean Truchon and Nicole Gladu, two Canadians suffering from incurable degenerative diseases in Quebec, presented a constitutional challenge to the reasonably foreseeable death requirement – arguing that the laws violated their Charter rights. Quebec Superior Court Justice Christine Baudouin ruled in September 2019 that it is unconstitutional to limit medically assisted death to those whose natural death is “reasonably foreseeable,” and gave the federal government six months to respond.

Amendments to Canada’s MAID legislation (also known as Bill C-7), were introduced by the federal government on February 24, 2020. Bill C-7 proposed broadening the 2016 law on medically assisted death to include those whose death was not reasonably foreseeable, among other changes.

In March 2020, and again in June 2020, the federal government asked for and was granted an extension to comply with the ruling by the Quebec Superior Court. Then on August 18, parliament prorogued – delaying the amendments to MAID legislation even further.

Additional safeguards proposed for when death is not reasonably foreseeable:

Dying With Dignity Canada is strongly urging the federal government to initiate the parliamentary review called for in Bill C-14 – specifically, to address the following three issues:

For more information and background on these three issues, please see The Council of Canadian Academies’ reports here.

Note: This webinar was presented on September 30, 2020. For the most timely updates on MAID legislation in Canada, be sure to follow DWDC on Facebook and Twitter. 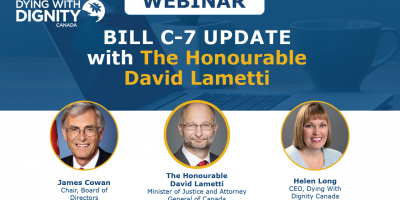 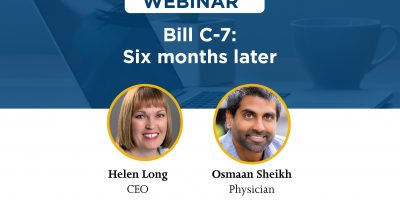 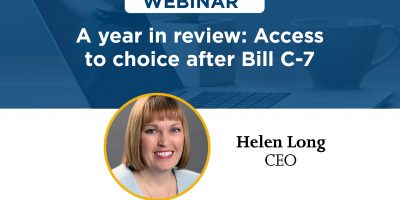 A year in review: Access to choice after Bill C-7

A year in review: Access to choice after Bill C-7