DWD Canada's election platform calls on the next federal to uphold the Supreme Court’s decision to ensure the right of Canadians to physician assisted dying.

The time is tight and the stakes are high. What happens in the next few months will determine how Canadians die for decades to come.

What We Need the Next Federal Government to Do

February 2016 is drawing closer. There are too many people who have already waited too long for the chance to have a peaceful death. A few weeks or even months may not seem significant, but when you are suffering, even an hour can be an eternity. We need a federal government that commits to implementing assisted dying without further delay.

Despite their best efforts, it may not be possible for a new federal government to bring in legislation prior to the February 6, 2016 deadline. The next Parliament should do its best to table fair and just assisted dying laws in a timely manner, without asking the Supreme Court for an extension.

If a new government cannot meet the court’s deadline, assisted dying can occur without federal legislation. This is a better option than increasing the burden on those who are grievously ill by making them wait even longer for a peaceful release from their suffering.

A Landmark Decision from the Supreme Court

On February 6, 2015, the nine justices of the Supreme Court of Canada unanimously struck down the federal prohibition on physician assisted dying (PAD), arguing the old law violated the Canadian Charter of Rights and Freedoms.

The Carter v. Canada ruling gave decision-makers until February 2016 to prepare for the decriminalization of assisted dying. It also established guidelines for determining who can access PAD and how it could be safely administered.

When the decision takes effect on February 6, 2016, it will no longer be illegal for a doctor to help a competent adult end his or her own life, so long as the patient is experiencing intolerable, incurable suffering as a result of a grievous medical condition that results from illness, injury or disability.

The Political Process to Date

Eight months have now passed since the Supreme Court’s decision. After months of inaction, the Conservative Government appointed a panel of three to consult with Canadians and report back. Two of the three members of the panel have been outspoken opponents of the right to die with dignity, providing testimony in the Carter case against it.

The Conservative government then released an “issues book” to obtain information from Canadians. DWD Canada asserts that this questionnaire is designed to manufacture fear, not to solicit information. For example, a question about eligibility asks whether someone should have access to assisted dying because they fear being a burden or if they are 16 years old. Both of these situations are clearly outside of the scope of the Supreme Court's decision.

The Supreme Court decision allows the federal government or the provinces to legislate; Both can, neither has to do so. If no legislation is forthcoming, physician assisted dying will be decriminalized but not legalized. The provinces can take the lead on legislating, but this may present some challenges to the right to access PAD if the they do not develop a harmonized approach.

Fortunately, the provinces have since joined forces in an Ontario-led initiative to create their own nation-wide consultation. Dying With Dignity Canada believes that the provincial panel provides a balanced approach to PAD with experts representing patients, doctors, nurses, lawyers and ethicists from across the country.

Where the Rubber Hits the Road

The Supreme Court’s Decision must be affirmed, not undermined

Dying With Dignity Canada has laid out a comprehensive policy framework that applies equally to federal and provincial legislation as well as to provincial and territorial regulators.

First and foremost, we need to ensure that any regime respects the principles laid out by the Supreme Court. This means that assistance to die must be available for competent adults with grievous and irremediable medical conditions who are suffering unbearably. Assistance must be available through the prescription of life-ending medication the patient takes themselves (sometimes called assisted suicide) or by the direct administration of life-ending medication (also known as voluntary euthanasia).

Any regime must also respect physicians’ rights of conscientious objection. No physician can be asked to prescribe or administer medication if they choose not to do so.

Definitions of interpretations of the Supreme Court’s language must be clear and objective:

How is competency assessed?

In recognition of the special nature of PAD, we support the involvement of a second physician who also assesses the competency of the patient.

How do we define a grievous medical condition?

A “grievous” medical condition is one that results in unbearable suffering. The decision regarding what constitutes such suffering is for the individual to make. Suffering that for some people is ennobling, for others might be unbearable. To decide otherwise is to infringe on the autonomy of an individual.

How do we define an irremediable medical condition?

In order to fulfil the criterion of being ‘irremediable’ available options and remedies must have been explored to a reasonable extent and the person requesting PAD must have found them insufficient. It is normal practice for a physician to discuss options for treatment with any patient, and it is up to the patient to decide whether or not to agree to any of them.

The person requesting PAD must remain in control of this process and their final decision regarding whether the offered remedies are sufficient or acceptable must be respected.

How do we define enduring suffering that is intolerable?

Enduring is a term open to some debate as it includes a component of time. This means that some people might argue that the suffering has to have gone on for some time before it becomes ‘enduring.’ At DWD Canada we believe this approach to be cruel. It is sufficient to know that the suffering has endured for an extended time or will endure for a long time or will endure until death.

Suffering should be considered intolerable if it is deemed by the sufferer to be so.

Legislation or regulation must address three critical areas of implementation:

In addition there are three key areas that must be addressed:

1. Safeguards should be reasonable, but not excessive.

Doctors may decline to provide assisted dying and pharmacists may opt out of filling prescriptions. But they cannot abandon their patients. The onus is on the healthcare provider to ensure the patient’s charter right to an assisted death is honoured.

3. Patients need to be able to die wherever they live.

Hospitals, hospices, long-term care facilities and seniors’ residences cannot be allowed to prevent a willing doctor from assisting an eligible patient who chooses to have assistance to die. 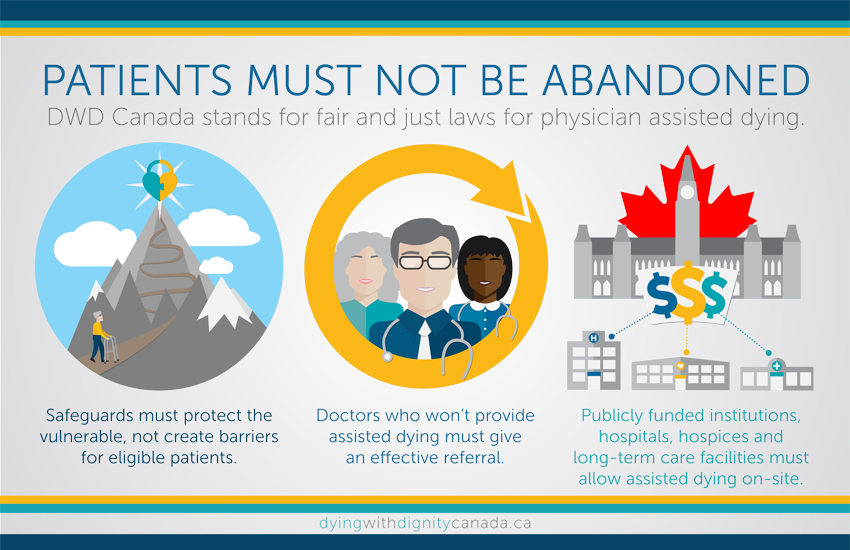 There are two types of risks to individuals which must be balanced:

Risks fall into two groups. Either access to PAD is so restricted that eligible individuals continue to suffer or it is too loose and individuals who choose PAD would not have done so under a more restrictive regime. These must be balanced and mitigated to the extent possible.

The first is the risk to those individuals who wish to have PAD but are denied it and suffer unnecessarily. This has been all too common over the years and is the reason so many thousands of Canadians are supporters of DWD Canada. This risk must not be ignored. It is one of the reasons the Supreme Court ruled unanimously on this issue. Any legislation must address this.

Any legislation must ensure that the person requesting PAD is not forced to suffer any longer than is absolutely necessary.

2. Risk of insufficient safeguards for PAD

The second risk is that individuals may die before they really want to. This can happen in three ways.

a. Individuals may be pressured into requesting PAD when they do not really want it. This risk is usually brought up by those concerned about pressure on people with disabilities or those with greedy or uncaring relatives. It must be noted that all of the people requesting PAD must be competent adults who are suffering. The individual requesting PAD is a competent adult and we must not devalue their expressed wishes.

Jehovah’s Witnesses currently claim their right to refuse blood products even when such procedures would easily extend their lives. We may not agree with their decision but we accept it as we recognize that autonomy is the cornerstone of our medical system.

b. Individuals may fall victim to a physician who ends their lives without their consent. This is extremely rare but serious. For this reason any case of PAD requires open record keeping and must be available for public scrutiny.

c. Individuals may request PAD during an acute illness which is likely to be short term; This is not possible given the SCC requirement of a condition being grievous and irremediable. Short term illnesses are, by definition, remediable.