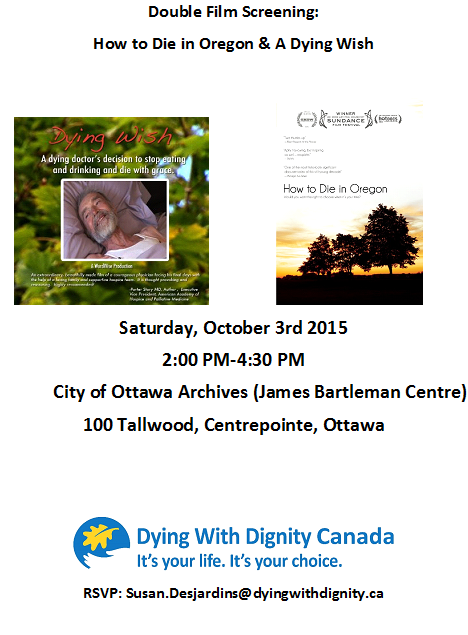 The Ottawa Chapter of Dying with Dignity Canada is pleased to invite you to a double film screening of:

A Dying Wish documents the decision by an American physician suffering from cancer to end his own life by stopping eating and drinking.

How to Die in Oregon documents the process associated with a peaceful and gentle death in a jurisdiction which permits assisted dying. It also addresses the issues and dilemmas of individuals facing a painful death as they decide whether to request assisted dying.

With the unanimous Supreme Court decision of February, 2015, due to come into effect 12 months after the decision, physician-assisted dying will no longer be a criminal offence. The Canadian Medical Association has put forward a protocol for physician-assisted dying, and both the federal and the provincial governments, led by Ontario, have established expert panels and initiated a public consultation process to determine how physician-assisted dying may be enacted. At present, however, Canadians continue to be limited in their choices when faced with suffering at end of life – the limited options include ending one’s own life by suicide, refusing or discontinuing treatment and stopping eating and drinking.

There will be a short break between the two films, and a brief discussion period following the screening.

Space is limited, so we encourage you to register early.

Please note that this facility is scent and smoke free.