Tracy’s story: My mother’s choice of an assisted death provided a lesson in bravery

In this powerful testimonial, Ontario’s Tracy Kelly writes about her beloved and brave mother’s choice of a medically assisted death after a terminal cancer diagnosis.

To look at her, you might never think that she was brave. She didn’t see herself that way either. Preferring the simple life of being surrounded by family, the little things were what pleased her most. Planting flowers, reading women’s magazines, watching cheesy romance movies on television, and spending time with family were the things that mattered to my Mom.

My Mom always knew that she wanted to raise a family. With the birth of my oldest sister in 1970, she became a stay-at-home mom. I came along in 1972, and three years after that, my brother was born. After living with a father who brought many challenges, Mom vowed to provide a better life for her own family. 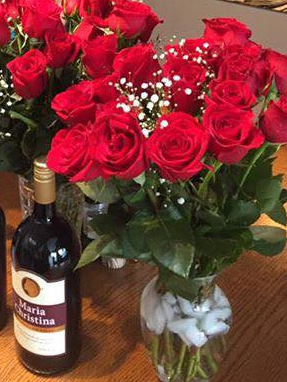 These roses were given to Tracy’s mom for her 70th birthday, a month before her cancer diagnosis.

Growing up, I would hear her belittle herself, saying “I’m just a stay-at-home mom” as if it were the least important job in the world. My Dad’s coworkers had wives that worked and my Mom would always feel self-conscious and ashamed that she simply raised children at home.

Yet, for her, raising children was where she was happiest. She loved being surrounded by our friends and by her nieces and nephews as well. Family was everything to her and she longed for nothing more. After my Dad passed away, I would often ask her if she had any dreams that she wanted to fulfill or if there were any places she wished to travel to. Her answer was always “no.” She was content with the life she lived.

Less than a month after her 70th birthday, fresh from a surprise birthday party filled with family and friends, my Mom went to the emergency department with a severe, sudden headache and trouble with her vision. Out of nowhere, my Mom was diagnosed with a brain tumour and scheduled for surgery.

I cannot even imagine the terror and fear running through my Mom’s head. I cannot imagine hearing those words. Yet for us, her children and family, she remained strong. I spent that first night in the emergency room with her and could feel the despair emanating from her spirit, yet she would not give in to the terror.

What must it be like to be wheeled into the operating room, knowing that they are opening up your head? I’ll never know the thoughts that went through her mind but she remained brave. When we received the news that they couldn’t remove all of the cancerous tissue and that my Mom had something called glioblastoma, a veritable death sentence, we were the ones that crumbled. 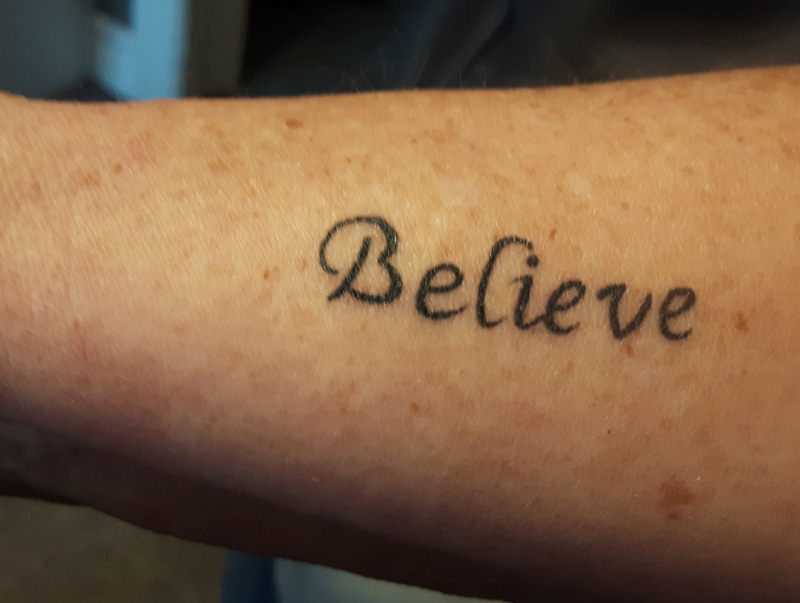 Tracy’s mother got this tattoo to celebrate her 70th birthday. She loved the word “believe” because it reminded her of Christmas and Santa. Her tattoo and its meaning helped her get through her final months.

I have no idea what it was like for her to be told she had only months to live. How does a person even live with that knowledge? Yet for my Mom, after the tears, she took it day by day and moment by moment. She wore the funny little hairnet in the hospital with style and a smile, and treated the staff with her usual kindness and care. She was not a woman defeated. Even given a terminal diagnosis, my mother remained the woman she always was: loving and always focused on the bright side and making others smile.

Even with an infected incision and a return to surgery, my Mom took it in stride. A month of home care showed her determined spirit and I remember her still getting her toes painted to make her feel happy. Yet, there was one aspect of her disease that did get her down. As a result of the tumour, she had lost her right peripheral vision and could no longer drive. She’d loved having the freedom to get around and this, I knew, made her sad.

She was not totally convinced about having treatment, chemotherapy, and radiation, but she decided to give it a try. After a few weeks, though, it was clear that neither her body, nor her spirit, could sustain the assault and so she made the decision to let things be. She felt so worried that we’d be mad at her for giving up but no one felt that about her at all. She was brave to try and brave to say no — who were we to make her go through something that made her feel so bad?

Unfortunately, the effects of treatment didn’t help anyway. The cancer was just too aggressive and progressing too fast. Her vision deteriorated to the point of instability on her feet and near blindness, and she knew that things were taking a downward turn very quickly.

Even before my Dad’s death six years earlier, my Mom had been a proponent of medically assisted dying. She hated witnessing the love of her life suffering in pain and having to be put into a medically-induced coma before succumbing to his death with a body ravaged by cancer. She did not want her children to go through that again. She didn’t want us to have to suffer through her death as well. She did not want herself to suffer either.

So one particularly bad day, when she knew that she was losing her functions quickly, she cried out that she wanted to die. I didn’t take that lightly. For a woman of such strength to ask for things to end, I knew that she was ready. Blessedly, dying with dignity with medical assistance had been made legal in Canada in June 2016. Knowing my Mom’s beliefs, I made a call.

After feeling so hopeless six years ago with my father, who suffered excruciating pain, I was honoured to make that call. I knew that it was some way that I could help my mother, even though it meant that I would lose her. The woman I talked with explained the process with compassion and initiated the proceedings with an ease and swiftness that I wouldn’t have thought possible.

My Mom accepted the news that she could end life on her terms with a dignity and grace that I’ll never forget. She felt not only relief for herself but for us as well. Always the mother, she was still looking out for the welfare of her children. When the doctors came to the house to examine her condition and resolve, she was unwavering in her commitment. 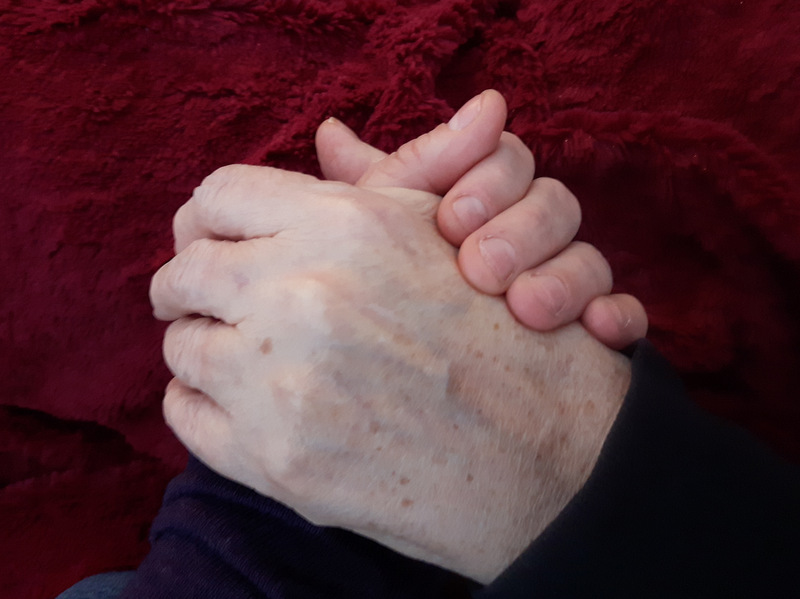 Tracy holding her mom’s hand the day before her mother’s peaceful, assisted death.

She picked the date and made her plans with all of us by her side. As strange as it sounds, the women in our family sat around the kitchen table with her jewellery, almost like a party, and decided which items we would like to remember her by. She’d already made plans for the “good stuff.” This was just an excuse to spend as much time with each other before she passed and to give her the peace of mind that small pieces of her would be remembered.

When the appointed time came for us all to say goodbye, we were all filled with bittersweet emotions. We were glad that she would end life on her own terms and would not suffer, but we would miss the woman who had demonstrated such caring, love, and strength. We would miss our Mom, our Sister, our Aunt, and our Friend.

As we said our goodbyes, we told her how brave she was and she tried to brush off our words. She told us how she felt she hadn’t done anything in life except to be a mom and we implored her to understand that it was the greatest thing she had ever done. That it was enough. If there was one woman who was put on the Earth to be a mother, it was her. We tried to convince her how brave she was to make the decision that she’d made; it was no small thing to decide, yet still she shrugged off her strength.

As heart-aching as it was to say goodbye, I’ve never witnessed a more beautiful passing. To see her slip off gently into an eternal sleep was the greatest gift she’d ever given.

I believe if my Mom could speak, she’d bestow such gratitude on the people and pioneers that made it possible for her to make this choice. For all of you, I say thank you.

Dying With Dignity Canada extends heartfelt thanks to Tracy for sharing the story of her mother’s life and choice.