My name is Shauna. My mom Janice chose to die with dignity through medical assistance in dying (MAID) in December 2020 at the age of 64. My mom and our family had a 15-year journey with breast cancer. The MAID program in Calgary gave her the choice to end her pain and suffering and have a peaceful death. My mom was so brave and never deserved to experience all that she did. I told her I would continue to share her story, as she did throughout her journey.

I grew up in Calgary, Alberta with my two siblings, Patrick and Kendra. We attended the United Church. Mom was very spiritual, which led her to endless hobbies and passions. My mom worked as a dental assistant, but after three kids, being a mom was her full-time job. She spent endless hours in her various volunteer positions at our schools, churches, and in the community.

My mom’s journey with breast cancer began in 2003; I would have been 11 years old and my sister only seven. A routine mammogram led to a lumpectomy and 16 rounds of radiation. Unfortunately, in 2008 another routine mammogram showed a recurrence in the same breast. This time she had medications, chemotherapy, and a mastectomy. This was followed by radiation and reconstructive surgery in 2011. I remember being in high school and going to treatments with my mom; it still haunts me to this day.

It was 2013 when everything changed! Despite many complaints of pain to her G.P., minimal investigations were done. She was told to take OTC pain medications, and Tylenol 3’s; nothing she tried seemed to help. Relentless, she requested x-rays which revealed that the cancer had returned as bone metastases. The cancer was now in her liver, sacrum, spine, ribs, and pelvis. This is when the endless appointments, tests, and procedures began. I was so angry given her history and self-advocacy that her G.P. didn’t take her seriously. Bone scan, CT scan, bloodwork, and an urgent referral to Tom Baker Cancer Centre (TBCC), the battle was in full swing. By this time, I was 17 and was able to understand the seriousness of her cancer. I tried to be there for her as much as I could, but I was also trying to discover myself and finish high school.

By August 2013, the pain became unbearable and so severe it required visits to the ER for intravenous fentanyl. The strong narcotics helped with the breakthrough pain. I convinced the team to try fentanyl patches, as well as short and long-acting narcotics around the clock. At this point, my mom felt her quality of life was significantly impacted; her stamina and independence were significantly reduced.

Over the years, it was as if everything she enjoyed was slowly taken away from her. She tried all the treatments and medications, every option that the oncologists had for her diagnosis. She tried endless alternative therapies including Spring Forest Qigong, Tai Chi, yoga, and Healing Touch, to name a few. Some of this eased her symptoms; the power of the mind and balance of energies is enlightening. Therefore, she accepted & embraced her new self, and found new friends, new paths, and new journeys.

Throughout my mom’s journey, she valued awareness, understanding, and community support. She was led to Wellspring, a community cancer support center that helps patients and families affected by a cancer diagnosis. She volunteered for the Run for the Cure and promoted Metastatic Breast Cancer Awareness Calgary. She was even featured in a magazine sharing her experience with genetic testing and the BRCA gene mutation. She explored her genetics to ensure my sister and I didn’t inherit it. It took around a year to complete the genetic assessment and testing. Luckily, she did not have the gene mutation and shared her experience and feelings in the magazine.

In 2009, she started a blog to document and share her journey. Caring Bridge is a free online website for sharing your thoughts, feelings, and health updates. It is an easy way to communicate health news to family and friends. Every time she wrote a new entry, I would get an email notification. Even though I talked to her every day and went to many appointments, I learned her true thoughts and feelings and so much more from her entries. When I’m feeling down, it’s helpful to read her journal. It is filled with endless courage, bravery, and positivity.

Through Wellspring, she found a dragon boat team for breast cancer survivors called the “Sistership.” She was on the competitive team for three years. Dryland and pool training started in January at the YMCA two times a week. As soon as the Glenmore Reservoir was open, they were on the water several times a week. The team traveled around Canada in the spring and summer competing. As her cancer advanced and prevented intense physical activity, she stayed as the team promoter, cheerleader, and drummer for a few more years. Mom loved the camaraderie and made lifelong ‘sisters.’

Afterward, she found the BEST group at TBCC and attended a weekly session. She was able to connect with social workers and other women with the same diagnosis. I truly believe this group significantly prolonged her life and increased her quality of life. The women discussed their treatments and were able to support each other with their journeys. In addition, a few years before she passed, she took a course to help her develop and run a new weekly support group for women newly diagnosed with metastatic breast cancer. She was so loving, empathetic, and generous. 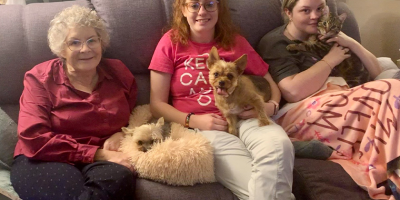 My name is Shauna. My mom Janice chose to die with dignity through medical assistance in dying (MAID) in December…