Sylvia’s story: How supporting my husband’s choice has changed my life

The option of an assisted death can be a source of hope and relief for Canadians who are suffering intolerably as the result of a severe medical condition. But what happens to the loved ones of the people who make that choice?

When it comes to grief and bereavement, everyone’s path is different. However, we can learn a lot from the growing number of Canadians who have supported a family member or friend on a journey with assisted dying. Nova Scotia’s Sylvia Henshaw has kindly agreed to share her reflections on the impact that her husband’s choice has had on her life. It’s a story, she says, that is still being written.

It was a perfect summer’s evening. My husband Doug and I were sitting in the cockpit of our boat, drying off from our swim, enjoying the sunset and a glass of wine. We had been laughing about something, when he suddenly became very serious and told me that, when he could no longer live his life his way, he was going to end it. I didn’t believe he really meant it. How could my husband — a gifted surgeon and the most active, vital man I knew — talk about taking his own life?

The topic came up several times over the years, and although I knew what he wanted, I never thought it would happen.

Fast forward to 2011, to a period following his quadruple coronary bypass surgery, a stroke, and a move from our beautiful family home in the country to an apartment in a senior’s development in town. Fast forward to a time after his diagnosis of Parkinson’s disease. 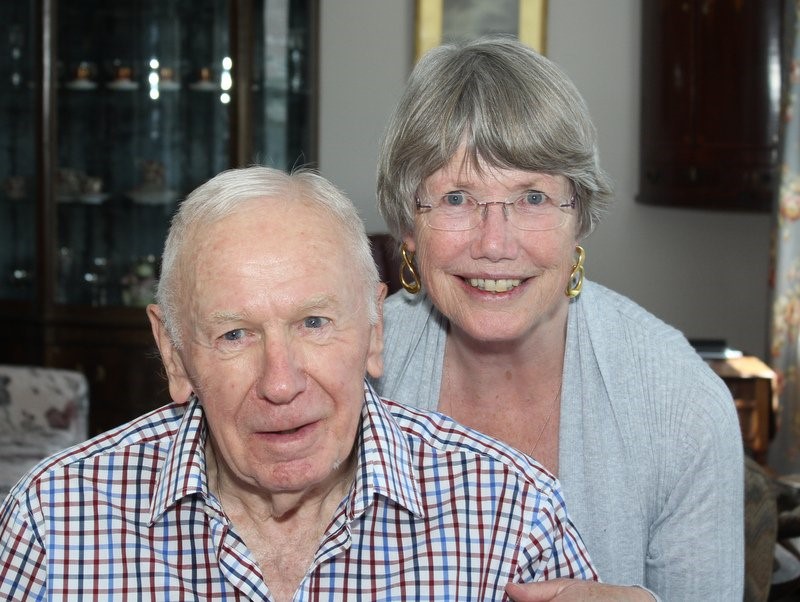 I was already exhausted from all the changes. Over the years, things we had done together had become my responsibility. My once social, outgoing, determined husband seemed to withdraw from the weight of his illness. Any mental or physical activity exhausted him. This became evident to friends, who curtailed their visits, thus adding to the isolation and loneliness we both felt.

Around this time, we heard a radio program of a man who ended his life, on his own terms, with the information and support of Dying With Dignity Canada (DWDC). From this time on, the possibility of an early, self-determined death became a possibility I could no longer ignore.

All too quickly I was having to bathe and dress my husband. He needed assistance moving about our apartment. Since he could no longer turn over in bed by himself, I was up several times during the night. As a retired nurse, I am no stranger to death. But planning for death, even in a supporting role, was all new and very disturbing to me. I felt like I was being torn in two. On the outside, I was reasonably calm, getting through the physical demands. But the stress of being on duty 24 hours a day, along with sleep deprivation, left me a quivering mess inside. Tears were never far away, no matter how inconvenient. Overwhelming fatigue was a constant companion.

In 2015, after a two-year wait, Doug moved into a nursing home. I still spent nearly all day, every day with him. I felt guilty for not being able to look after him at home. I had “survivor’s guilt” for having my own health while his was failing. Every day I told myself, “You can do it. Just smile, and get on with it.” Being his eyes to the world was incredibly difficult, as my world seemed to be centred on his needs.

As soon as Canada’s medical assistance in dying (MAID) law, Bill C-14, was passed in June 2016, Doug applied for a medically assisted death. As a result of the rights being offered before the proper supports were in place in our community, there was a nearly three-month wait for him. That time was filled with anxiety and frustration. I sat through three assessments of my husband’s eligibility for death. Each one drained him — and me. He was so very frail, and yet one of the doctors told him, with sympathy, that frailty didn’t count. I watched while the uncertainty and anxiety robbed him of the little strength he had. 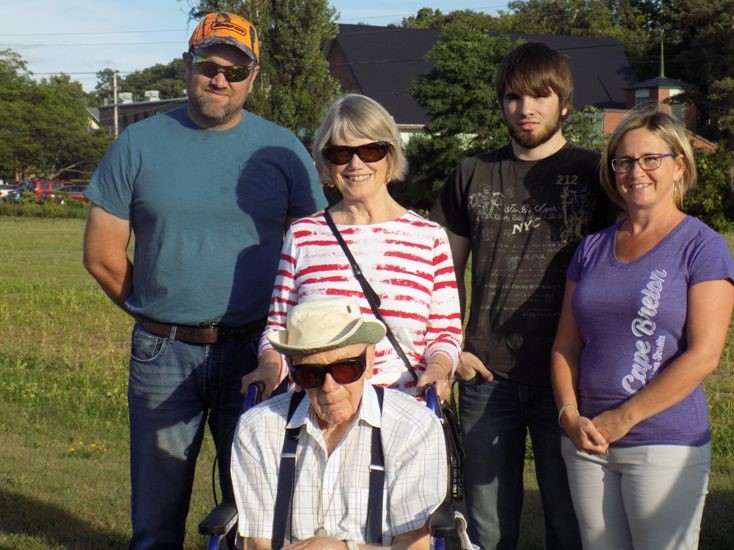 We knew that the law would require him to consent to the procedure at the time of his planned death, and his already weak, slurred voice was becoming unintelligible to the average person. His greatest fear was not of dying, but that he might be too weak to die on the appointed day. I didn’t want him to die, but I didn’t want him to have to go on living like this. I spent even more time with him, trying to occupy his mind and calm his fears of failing to be accepted for an assisted death, and of being unable to speak at what would be the last minutes of his life. Nothing in my life to date had prepared me for that.

‘He truly beamed; he was so happy, so relieved.’

Finally, the call came, telling me Doug’s death would take place on September 6, around 5 p.m. Just like that. How was I supposed to feel? Relieved? Yes, briefly. Sad? Definitely. Happy? Maybe, especially with the thought that the next morning I would be bringing him the news he had been awaiting for nearly three months. But how happy can one be knowing her husband is going to die in a few days? Intellectually, I knew we were doing the right thing, but often heart and intellect are at odds, and this was one of those times. Still, I had given so much of myself to this point, I couldn’t withdraw my support now. When I shared the news the following morning, his face, for so long lacking expression as a result of the Parkinson’s disease, lit up! He truly beamed; he was so happy, so relieved.

It is ironic that once he knew when he was going to die, he seldom spoke of it again. We had a wonderful, joyful five days together. The doctor who was to administer the drugs phoned several times, to chat with us and to ensure that Doug was still capable of deciding his fate. Doug was very weak and slept frequently, but his awake time was full of peace and joy in the knowledge that he would not have to wake up on Wednesday morning. The mask of pain, frustration and anxiety he had worn for so long, was gone. I was relieved to see him at peace. I tried not to think of what lay ahead, but to enjoy the bright spots that had been denied us for so long.

People have asked what we talked about during those final days. The conversations were easy, as they are between couples who have been together for 44 years. We talked of children, of grandchildren, of travels, and of home. We talked about the past, not the present or the future. The past was where the good memories and happy times lay. The present and the future had been sorted long ago. Doug knew I could cope with whatever I had to, and I knew I had no choice but to cope.

The story of Doug’s death has been told in a previous blog. I believe it was all he wanted it to be. He participated until the very end. And until the very end, I was by his side, holding his hand and still trying to smooth the way for him. Following his death, my sons and daughter-in-law came into his room to wait for the undertaker. We wrapped him in the brightly coloured quilt I made for him, mostly while sitting at his bedside. We walked out with him for the last time, followed by several of the staff. The walk down that hall had never been so long. 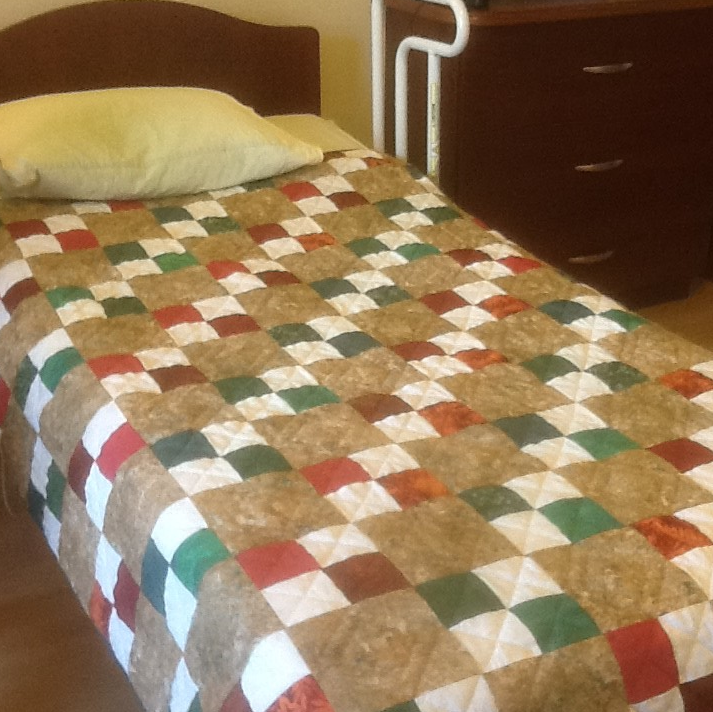 After his medically assisted death, Doug was wrapped in this quilt made by Sylvia, his beloved wife of 40 years.

One thing I have learned from my journey is that I will never be the same, and I believe everyone who travels this road will share the feeling. Here is why: You spend every bit of yourself supporting your loved one, physically and emotionally, even knowing that your efforts are not effective. You try so desperately to make up for what they have lost. Yet, with the tiny, tiny bit of your broken heart and soul you try to help them find a way to end their life. There is a huge disconnect between the selfless giving and advocating for death. It tore me apart, but I don’t see how I could have done it any other way. There is no place for self on this journey.

And now it is over. What happens next? I don’t fully know yet. For what seemed like a long time, I felt empty, devoid of interest. I went from having every minute of every day pre-planned to having to fill the days. I found that I, who could talk to anyone, had run out of small talk. Reading anything more than a short article was impossible as I couldn’t concentrate. Over time, I have improved, but I am a different person now. I am no longer half of Doug and Sylvia, no longer caregiver, no longer a wife. For so long, I struggled to find things to tell him, to bring the world to him. Now, I have so much to tell him, and he is not here. 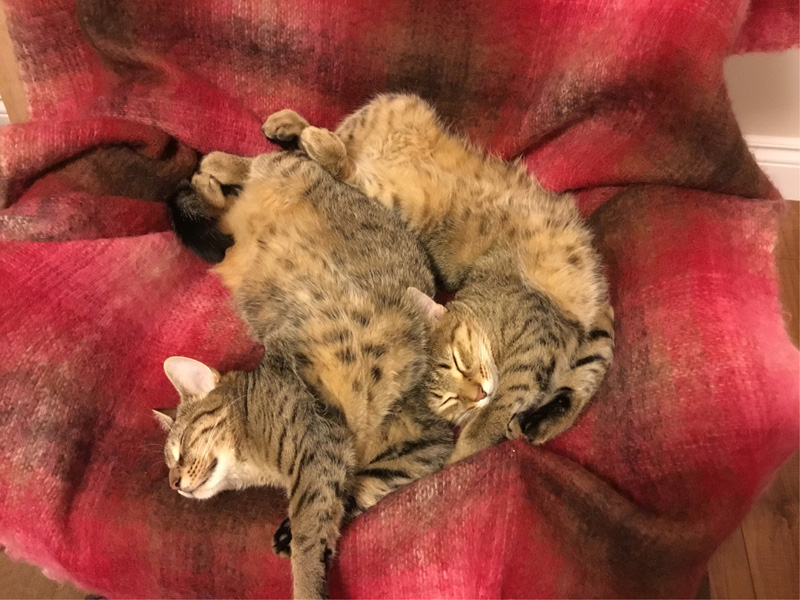 Sylvia’s cats, Anais and Robbie, have been a major source of comfort for her in the months since Doug’s death.

I believe we, the survivors of this journey, are a new class of widows, widowers, children, parents, loved ones. We followed a legal path, not the one most followed, but a new, untried one. Will friends and family accept the decision of our loved ones, and therefore, ours? In my experience, nearly everyone has. But can we, ourselves, accept our role in the death of our loved one? In the days and weeks following Doug’s death, insecurity reigned. Today, I realize if we, the survivors, don’t talk about it, we won’t even know who is part of our groundbreaking club.

I am so grateful to DWDC, not only for the support they provided during my journey, but for encouraging me, and others, to share our stories, our pain and our grief. Our loved ones have been leaders on this journey, and looking back, it has been a privilege to have been part of the team.

Dying With Dignity Canada thanks Sylvia Henshaw for being one of the first brave Canadians to publicly share her personal experience with assisted dying. Your powerful and moving insights have helped countless others on their own journeys. Thank you.