“I am writing to beg you to give this legislation the highest priority when parliament resumes sitting in September.”

This was written by 75-year-old Susan in a letter she sent to Prime Minister Justin Trudeau this summer. With the news of Parliament being prorogued in August 2020, people like Susan are in limbo, awaiting the changes proposed in Bill C-7. This is Susan’s story.

Last time I counted, there were 20 things wrong with my body. I take 12 prescription medications, but many of my conditions are not curable or even treatable, and for some, there are no known causes. I am in some kind of pain continuously.

For 30 years, I have had fibromyalgia which causes fatigue and almost non-stop physical discomfort. Even though I am always tired, I cannot sleep or rest because of my Restless Leg Syndrome and the uncontrollable twitching and jerking of my whole body. I have various joint problems (which have compromised my mobility), worsening COPD, and worsening Macular Degeneration (an eye disease that can cause severe and permanent loss of vision). Since 18 years of age, I have also struggled with depression. In spite of various types of therapy and medications, nothing has given me real or lasting relief from the depression which negatively affects how I feel, think and act.

I had applied and been accepted for voluntary assisted death at a Swiss clinic. COVID made it impossible to travel — and of course I would much rather die at home — so earlier this year, I was surprised, relieved and pleased to learn that I will qualify for medical assistance in dying once the changes proposed in Bill C-7 come into effect.

I do not qualify under Bill C-14 because of the reasonably foreseeable death requirement – something that was declared unconstitutional almost a year ago. I initially approached a nurse practitioner who I knew had helped a friend to die. She referred me to a doctor who explained the difference between the current legislation and Bill C-7. Once Bill C-7 is passed, I plan to access MAID almost immediately. My forms are in place and my doctors are on side. Waiting for the new legislation and the uncertainty about when it will pass in parliament is very difficult and very stressful. 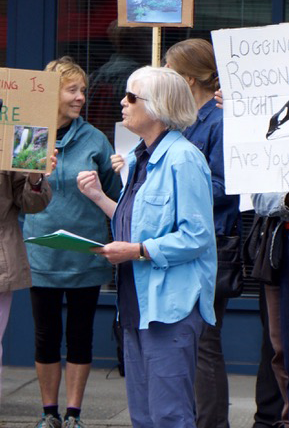 Photo: Susan speaking with a local reporter outside her MLA’s office. An environmental activist for 15 years, Susan helped to organize this protest against logging that would damage local beaches and endanger the orcas.

I am 75 years old and have been planning my end-of-life for some years. I feel that now is the right time. Although none of my physical problems qualify as terminal, they seriously compromise my quality of life. I can no longer garden, do yoga, get in and out of my kayak, walk on the beach (the surface is too uneven), or sit in meditation. These activities are what have sustained me over the years, and I can no longer do any of them.

I am afraid of becoming disabled from an acute health event and ending up in a care home. Both of my parents developed dementia in their late 70s and I want to avoid the possibility that this may happen to me. My short-term memory seems to be deteriorating. I also don’t want to live through the losses and chaos which are inevitably coming with climate change.

When I think about my death, I feel an immense sense of relief.

Note: Bill C-7 was passed in March 2021. You can read more about the changes here.