How do you say goodbye to a life partner of 25 years? In this post, Siobhan of Calgary, AB shares her experience supporting her husband Scott through his end-of-life journey and choice to access an assisted death. Read on for Siobhan’s powerful reflections on her family’s story, including lessons she learned and what she thinks others should know about choosing medical assistance in dying (MAID).

Monday, August 19, 2019 was a big day. It was the day that the doctor would come to do the second and final assessment before my husband Scott could chose to end his life with medical assistance.

But as it turned out, the most challenging event of the day for Scott was just having a shower. It took every last bit of his strength and energy to get up the stairs, have a seated shower, and then to dry off and dress — none of which he could do alone anymore. He was so drained and, I think, humiliated and mortified by the whole situation. In his mind, he was now fully without autonomy and dignity — exactly what he had wanted to avoid with the availability of medical assistance in dying (MAID). Scott was finally approved to proceed 15 days after completing and submitting his paperwork to begin the MAID process. We are so thankful that this was an option, and that he was able to end his suffering. However, he did not die as he had hoped — before the worst of his suffering set in.

For him, the last night was a terrible struggle. He didn’t sleep and couldn’t get comfortable because of the pain from the spreading cancer. We sat on opposite ends of the loveseat at one point, legs intertwined and facing each other. He really looked at me deeply with love and sadness in his eyes as we sat in the dark at 2 or 3 in the morning. We shared this quiet moment, knowing that it was our last night. His last night of pain, his last night of discomfort, and his last night in his body that had betrayed him. His last night as a dad, a husband, a son, a brother, a friend. I think we were both relieved it would be the last night like this, and he was calm and ready to be done. But I was scared of the future without him. 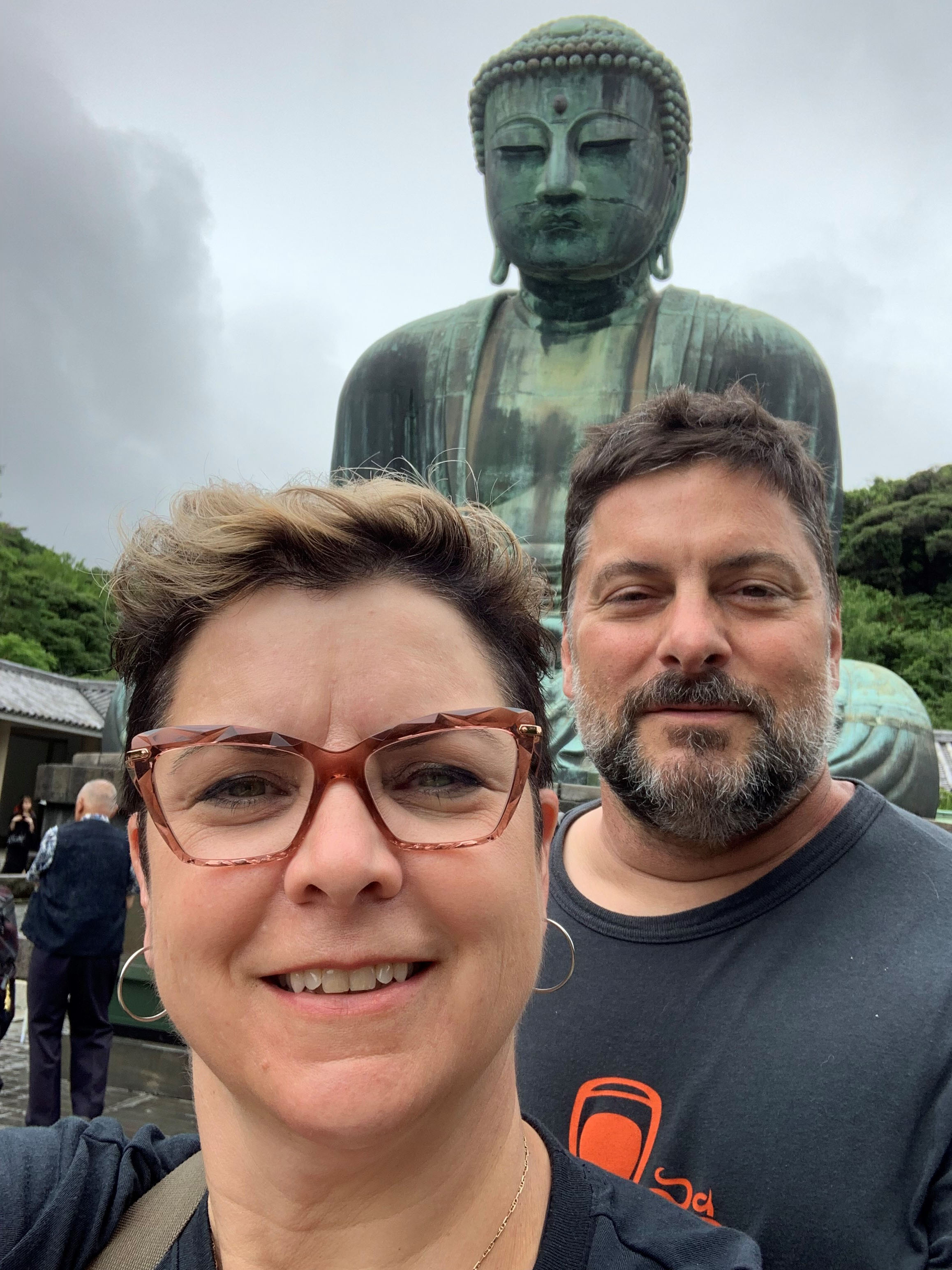 Scott and Siobhan traveled to Japan in the summer of 2019.

Just six weeks earlier we had traveled to Japan, but his cancer had a different timeline in mind and was advancing rapidly. We had to leave early, arriving back in Calgary on July 18. The doctor at the emergency room set Scott up with home palliative care and diagnosed him with pneumonia. Our 25th wedding anniversary, July 22, was spent at the hospital and then back home managing his pain, oxygen, and pneumonia symptoms. He rested and gained some strength to enjoy the following very busy weekend of his party. He was getting the opportunity to spend time with friends and family on his terms, but what was planned to be fun was now so surreal and sad. It was tiring for him with many visitors, meals, and so many sad good-byes. He rested for a week after, but knew then that he was not bouncing back or stabilizing. Scott executed his MAID forms on August 4th, and that began the 10-day waiting period. He rapidly declined in the following days to a point he never wanted to experience. I was distressed seeing him both suffering and high on pain medication.

His MAID approval process was slow due to availability of doctors to complete his assessments. It seems we were caught up in summer vacation absences which delayed the process for Scott. While suffering and experiencing a rapid decline in his body’s ability to do the most basic of functions, 15 days seemed like an eternity for him to wait. The worst part was the lack of communication from MAID coordinators, which increased his suffering and stress significantly, as he worried he would lose the capacity to consent. We waited until August 19 in the afternoon to meet the doctor and complete the second assessment. This is when we learned Scott was scheduled for MAID the following morning, less than 24 hours later. He didn’t have to take that appointment, but he was suffering so greatly he chose to go ahead. Fortunately, his loved ones who needed to travel were able to overcome huge obstacles and be here with him on time.

The morning was so peaceful. That morning, CBC Radio was featuring music of Rush, which was so fitting. Scott enjoyed a bit of Kicking Horse coffee (the one daily ritual he still enjoyed), and Caoimhe, our dog, was by his side in the bed for most of the morning as we waited. He spoke lovingly to each daughter and tried to share his wisdom and advice that would stay with them forever. He thanked me for caring for him, and apologized for getting sick, for dying, and also for being cranky and difficult when he was in pain. He had wondered to me about needing to find the right words to say at the end. He worried that it should be profound. In the end, it was simple and perfect. What did we need to say to one another on this last morning together as best friends, husband and wife, and partners in life? We had started our journey innocently, both believing we were just having a summer fling, but ended up sharing a life together. Even though we had our individual interests and some separate parts of our lives, our life together was one life — we shared many memories that only he and I knew. We told each other how very much we loved one another and enjoyed our life together. 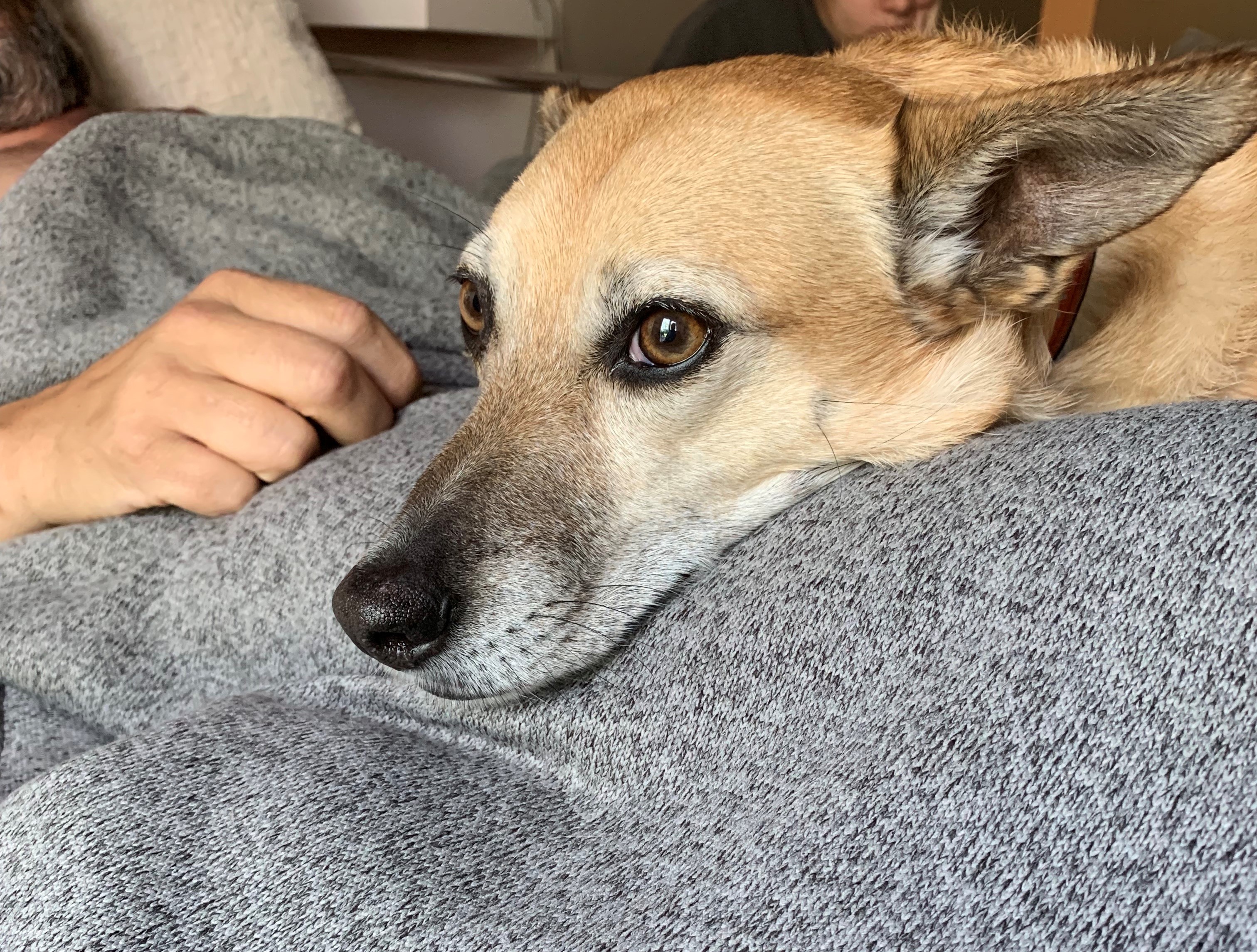 Caoimhe the dog was by Scott’s side the whole morning before he accessed MAID.

Eventually, the doorbell rang a few minutes earlier than expected. My heart sped, and tears immediately started to spill from my eyes. We hadn’t met this doctor before, but she was so caring, loving, and respectful of this very incredibly private and important moment in our lives. Scott spoke to her about his reasons for wanting to die, and even confided to her his concern about the apathy he was feeling about the events which were about to unfold. She confirmed that only meant that he was truly ready and at peace with his decision.

We had not rehearsed or planned anything. The only predetermined item was that I wanted to sit at his side and hold his hand. He asked us to change to classical music, and everyone had a final quiet moment with Scott while the doctor and nurses prepared downstairs. It became very real, and we just kept telling each other how much we loved each other. Our daughters were by his side, holding his hand and arm, crying and also being so brave and strong. His mom was right by her granddaughters, but also close to her son, her baby. His brother and sister-in-law were at his feet — touching him, connecting with him, and present for him to give him strength. Our two closest friends were in the background as witnesses to this most intimate moment of our lives as part of our journeys and story. All of them were there to support me and the girls, but also to love, support, and say goodbye to Scott. 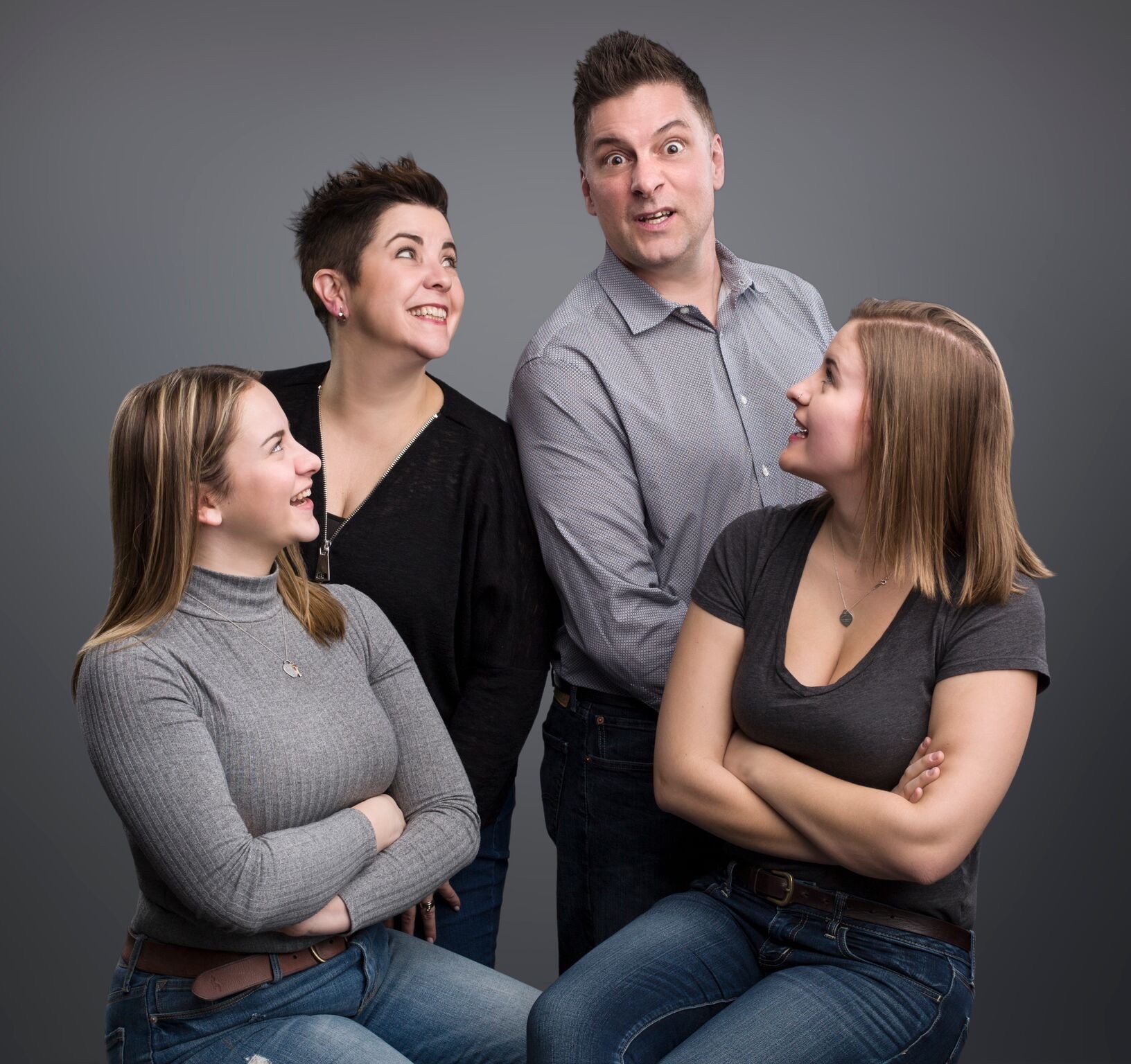 Scott and his wonderful sense of humour, featuring his wife Siobhan and two daughters.

The medical professionals returned, and the doctor confirmed with Scott that he still wished to go ahead. The first drug she administered was a sedative. As she predicted, he would fall asleep and begin snoring. The second drug was to prevent the following drugs from hurting, and the third drug came in two very large syringes that looked like milk and took several minutes to fully inject. This medicine put Scott into a coma and the snoring stopped. The fourth and final medicine would cause muscles to stop. The heart is a muscle and breathing requires muscles, so this is what ends life. The blood vacated the massive tumour on his neck and we finally watched ‘DJT’ die (DJT was our nickname for his tumour). She listened to his chest. His heart was still soldiering on; Scott was such a strong man, even at the end. After waiting a few more minutes, she listened again. She silently motioned for the nurse to listen to his chest, and the nurse confirmed that it was silent. They noted his time of death as 11:27 a.m. on August 20th, 2019. The silence of the moment was disturbed only by soft crying at first. Eventually, we toasted to Scott’s memory and we drank mimosas and scotch in his honour. I sat there for nearly an hour just holding his hand. I still see the image of his hand in mine everyday as I go about my day. He looked so handsome — finally peaceful, resting, and not in pain. I was glad for this time with him, despite my earlier fears.

I believe Scott’s preferred version of a medically assisted death would have looked different. Unfortunately, by the time the process all came together, he was severely disabled by his cancer, practically bed-ridden, and found very little humour in life anymore. He didn’t have a dinner party prior to, as he envisioned (he hadn’t been eating for weeks). It wasn’t in the evening; these things must be scheduled around the availability of doctors and nurses. He wasn’t upstairs in a bedroom, but rather in a hospital bed in our family room.

In July, I did obtain the legal information available and shared all the forms and rules with Scott. We did get assistance in the process from the MAID coordinators, but there is also a great deal of misinformation about this process that is shared by those in the healthcare world and often repeated. So here are the facts we learned about MAID, in my words:

It would be my recommendation to anyone who wants to consider MAID as an option to get assessments completed as early as possible and to wait to schedule the procedure until the time is right. If possible, give the coordinators at least 2 weeks’ notice if the individual has a certain date in mind. I would even recommend letting the approval lapse and repeat the process to get new approvals, rather than waiting and risk running out of time, suffering, and adding the increased stress of the assessment and approval process at the end of life.

I hope that in sharing this very private moment that others can know what to expect and reduce some of the additional stress that we experienced while Scott exercised his right to die with dignity.