Priscilla’s last lesson: ‘No one has the right to stop us from dying’

Home / Personal Stories / Priscilla’s last lesson: ‘No one has the right to stop us from dying’

Priscilla Cole had one last lesson to teach before she died.

A lifelong educator, she had devoted her career to instilling others with knowledge and the confidence to put it to good use. Among her pupils were the youngsters she taught at a private girls’ school in Toronto, the students she counselled at Seneca College, and the two sons she raised as a widowed mother, who are now doctors with grown children of their own.

At 91 and growing increasingly frail as a result of advanced osteoporosis, Priscilla wanted to alert all Canadians to the agony she endured in her efforts to take control of her dying process, to end her life in peace at a time of her choosing. And though she ultimately realized her wish for a medically assisted death, her harrowing final weeks speak to the confusion that continues to shroud Canada’s year-and-a-half-old assisted dying law, and to the challenges this has created for even the most learned, well-connected patients and their loved ones.

“I’ve done my job” was a refrain that Priscilla often repeated to her sons, Donald and Howard, during the intimate conversations they shared in the last weeks of her life. “I have nothing to regret. My two boys have done wonderfully. My grandchildren are doing beautifully. I’ve done my job.”

Priscilla had been clear about her wishes for months: she wanted a medically assisted death. However, her healthcare providers didn’t believe she was eligible because she hadn’t been diagnosed with a fatal illness. Her sons were also unaware that one does not necessarily have to be terminally ill in order to access assisted dying under the rules laid out in the federal law. So when Priscilla suffered a painful back or hip fracture during a fall in early November, she declared that she would begin the process of foregoing food and drink. She was ready to die, and starving herself, she believed, was the only feasible way she could speed up the process.

“The law is keeping me alive against my will, having me die in pain, by only drinking water,” Priscilla told Howard, her elder son, in early December, as he sat vigil by her bedside. “We are kinder to our animals.” 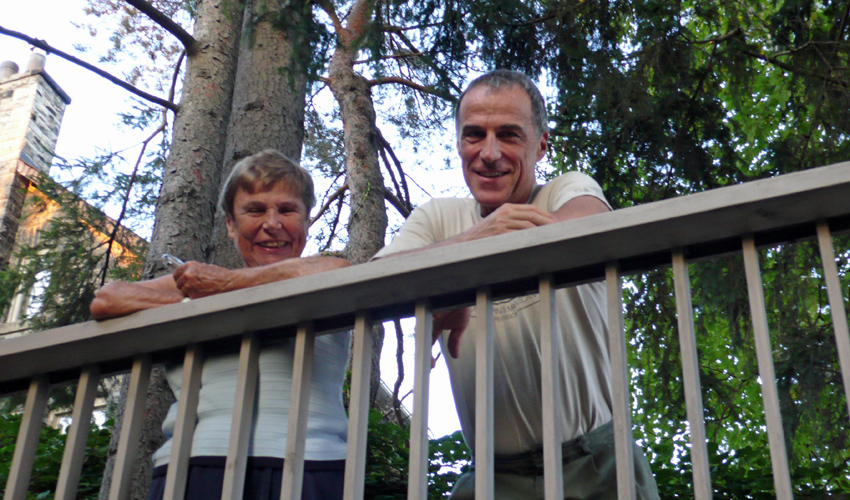 Priscilla Cole and her son Howard in his Toronto backyard in 2007. (Courtesy of Donald Cole)

Voluntary stopping of eating and drinking, or VSED, is a legal but not-well-known option available to suffering individuals who want to hasten their death. Although only a handful of academic studies have been published on VSED, guidelines exist to assist ailing individuals in ending their lives as reliably, as painlessly and as quickly as their bodies will allow. However, abstaining from food and drink to hasten one’s own death is not easy or straightforward: in general, it requires planning, hearty resolve and support from the individuals involved in the patient’s care.

Priscilla had a plan and determination to spare. Winning the cooperation of her caregivers proved more complicated. The physician at the residence was apparently unfamiliar with VSED, and it took some staff a number of days to comply with Priscilla’s wishes not to be brought food. “When around friends and family who are urging her to eat something, she demurs — well-trained to be socially appropriate — and will take small amounts of liquid or solids,” Donald wrote in a November 18 email to the home’s director of health and wellness, explaining Priscilla’s predicament. “We can handle the family and external friends, but we are wondering what the best way to respect her patient autonomy and at the same time not disturb others.” The facility was ultimately supportive, but there’s little doubt that feeding Priscilla even a little when she was reluctant to eat would have drawn out her already arduous journey.

Howard described the experience of defending his mother’s rights — while watching her health steadily decline — as a “rollercoaster” for him and his brother. “Donald isn’t sleeping well. I’m having nightmares almost every night,” he said. “Mum has asked me, ‘What should I do?’ It’s putting us in the position having to lead and assert ourselves against some forces here that are not supportive… And it always hurt me to see my mum in pain. I was just thinking, ‘Come on, guys.’”

A lifeline for the right to die

The brothers’ efforts to advocate for their mother led them to approach Dying With Dignity Canada. In early December, Donald contacted Nino Sekopet, the organization’s Personal Support Program manager, to get more information about VSED and the supports that are available for individuals and families who are exploring their legal end-of-life options. Donald wasn’t only motivated by the drive to arm his family with the information they needed; he was also responding to his mother’s request to share her story with Canadians.

Priscilla’s desire to use her experiences to help others came as no surprise to Donald. Here was a woman who dedicated her personal and professional life to educating and empowering the people in her community. At age 55, Priscilla retired from Seneca in order to focus on developing active-learning programs for seniors. Over the years, she also volunteered with the Toronto Zoo, the Royal Ontario Museum, Sunnybrook Hospital and the Canadian Osteoporosis Patient Network, a group she co-founded in 2004. In 2012, Priscilla was one of a group of volunteers who were awarded the Queen Elizabeth II Diamond Jubilee Medal for their efforts to improve the lives of Canadians with osteoporosis. 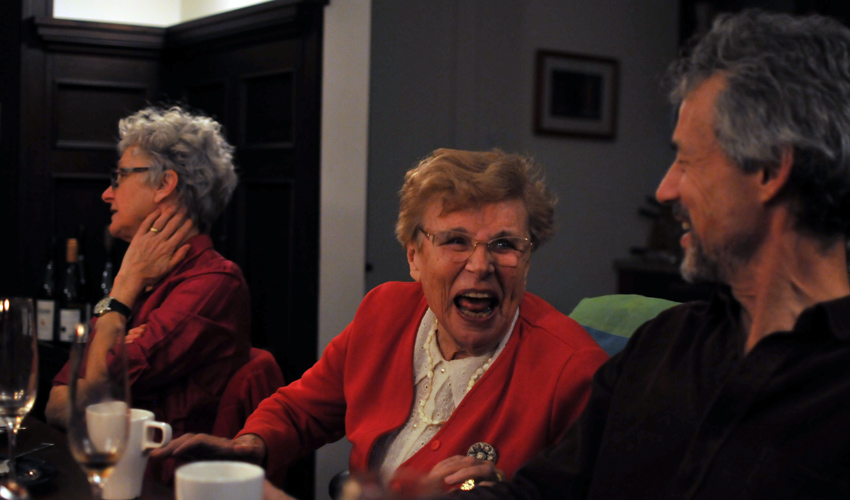 Priscilla shares a laugh with her son Donald in 2013. (Courtesy of Donald Cole)

As Donald would soon learn, Priscilla’s insistence on helping others achieve their end-of-life goals would ultimately allow her to reach her own. During his conversations with Dying With Dignity Canada, he learned of an Ontario court ruling from six months earlier that has dispelled myths surrounding Canada’s assisted dying law. The decision came in response to a court challenge launched by a 78-year-old Ontario woman who had been approved for assisted dying but whose doctor was refusing to move forward because of the confusion surrounding a controversial requirement in the law: that, in order to qualify for a medically assisted death, one’s natural death must be “reasonably foreseeable.” In his June 2017 ruling, Justice Paul Perell wrote that a person needn’t be terminally ill for her natural death to be “reasonably foreseeable,” nor does one need to be suffering from a fatal medical condition in order to qualify for an assisted death. When making a determination about a patient’s eligibility, providers of MAID, “need not opine about the specific length of time that the person requesting medical assistance in dying has remaining in his or her lifetime,” he noted.

Perell’s ruling in AB v. Canada, Donald soon realized, had significant, potentially game-changing implications for his mother’s case. The fact that Priscilla was not terminally ill would not automatically disqualify her from access to an assisted death. It raised the possibility that she might be able to achieve her goal without having to starve herself any longer. A peaceful passing, the kind that Priscilla had envisioned and hoped for, suddenly felt within reach.

Learning that Priscilla might have an alternative to VSED came as a relief, Howard said. But he and his brother were incredulous about how difficult it was for their mother to get accurate information about her options. “I said, ‘Donald, we’re physicians! We have some connections,” he recalled. “What happens to the majority of people, who have no background in science, no medical background and no connections?”

In order to determine whether she was eligible for an assisted death, Priscilla would need to be assessed by two doctors or nurse practitioners. Finding clinicians who are comfortable participating is often difficult for individuals in her position, but Dying With Dignity Canada was able to put Priscilla in contact with two doctors who could visit her and answer her questions. The day after Donald spoke by phone with Cory Ruf, the organization’s communications officer, Dying With Dignity Canada CEO Shanaaz Gokool visited Priscilla and her sons at her residence. Her declining health threatened to take away her capacity to consent to assisted dying. So, with Priscilla’s encouragement, Shanaaz contacted a couple of trusted physicians who might be able to provide an assessment on short notice. A young anesthesiologist offered to see Priscilla the following afternoon. A second doctor would visit four days later.

In assessing Priscilla’s eligibility, they would not only look at the state of her health and her ability to make decisions about her end-of-life care, but they would also ask her about the nature of her suffering and her motivation for wanting to end her life. The assessors’ patient-first approach came as a breath of fresh air for Priscilla and her family. “It is the subjective experience of the person that is paramount in this situation,” said Howard, channeling his mother’s views on what should drive the public debate on end-of-life choices. “It is their life and quality of life which they have the right to assess and decide to die, or not, on their own accord.”

Priscilla finished teaching her final lesson on Thursday, December 15, 2017, one month after she began the process of withdrawing from eating and drinking. Before the doctor arrived to her apartment, Priscilla repeated her wish for her story to be used to help others. “We have the right to die and the right to life,” she said to Howard. “And no one has the right to stop us from dying. It’s a gift I give to you — the right to die. You, too, have given me this gift.” 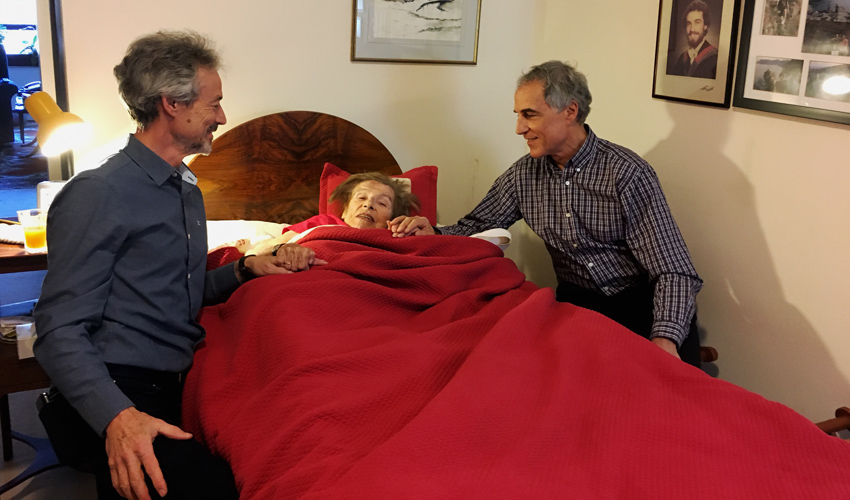 Priscilla holding her sons’ hands on the last day of her life. (Courtesy of Donald Cole)

Finally, Howard, Donald and other family members comforted their matriarch, and she offered comfort in return. “I don’t want you to worry about me,” she told her loved ones. “I am in peace and you should be in peace about me. I am very content. I just want to die. Have no regrets about me. Be content with me.”

Dying With Dignity Canada thanks the Cole Family for asking us to share her story with Canadians.