Monica’s mother, Laura Jones, chose to access medical assistance in dying (MAID) on January 24, 2019 at her home in Saskatoon. She was 99. This story, shared by Monica, aims to help improve the experience of accessing MAID for others in the future.

For two or three years, Laura had made it clear that she did not want to live for the sake of living. Her hearing steadily declined through her nineties. Then her eyesight got dimmer and dimmer. A couple of years before, she asked her daughter Pat to take her to Switzerland if she could no longer see and hear.

Laura had five daughters. Pat, her oldest living daughter, resides mainly in Calgary. I, Monica, live in Vancouver, and Mary Lou lives in Saskatoon. Donalda, the youngest, lives in Regina. Sheila, her eldest, died in 2006.

Laura was living in the house the family had moved into in 1964. Her grandson lived with her for the last 18 months and cooked the meals and was there when she needed him. Daughter Mary Lou and her husband, who live in the city, were a constant help with shopping, appointments, banking, and many more things.

In October 2018 a friend of mine in the Vancouver area successfully advocated for her mother to receive MAID. She was knowledgeable and was aware of Laura’s situation, and she was pretty sure that she would qualify.

My family doctor was sympathetic and suggested I talk to someone about MAID in Vancouver. The woman I spoke with could not speak directly to the situation with MAID access in Saskatchewan. We discussed the option of Mom coming to B.C. if it turned out she was not eligible in Saskatchewan, but she thought the only issue would be cost, as Mom’s health coverage is in Saskatchewan and not B.C. Coming out of that phone conversation and investigating online, I thought it was worth pursuing.

With the agreement from my sisters, I raised the option of MAID with my mother during a visit to Saskatoon in early December 2018. She had two initial reactions.

First, she did not want to cause any trouble for those she would leave behind. She was not fully aware of the new legislation. A retired librarian, she had been an avid listener to CBC and reader of the daily paper, but because of her fading hearing and sight, she no longer did either of those things and was less aware of “current events.” I assured her that anything that transpired would be legal.

Second, she had promised her youngest grandchild that she would try to get to her wedding in Regina in February. 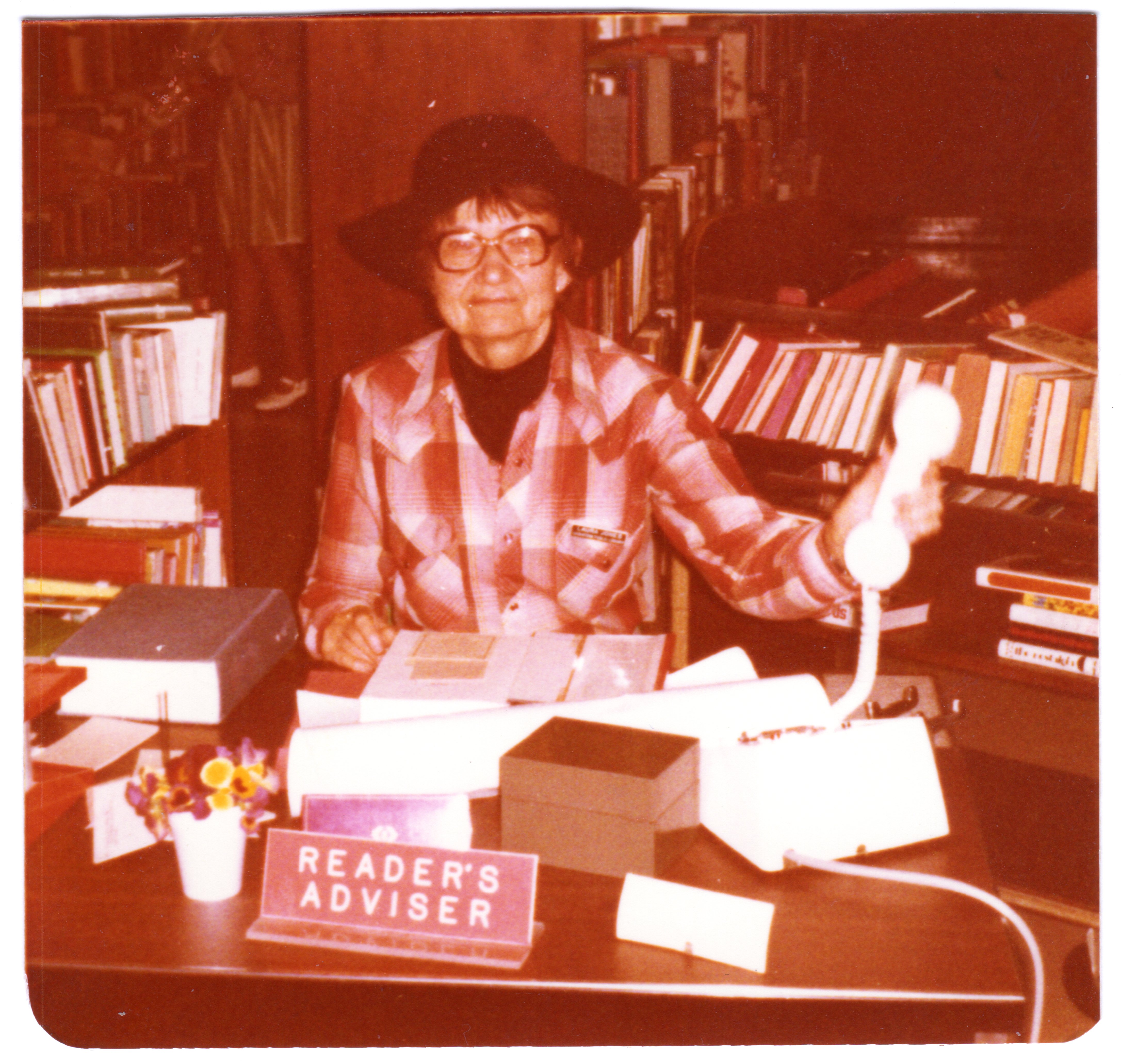 Laura at work at the Saskatoon Public Library in the 70s, dressed in western gear during Pioneer Days.

Mom agreed that we should put the process in motion and see where it led. We made an appointment with her doctor at the Saskatoon Community Clinic. Mary Lou told the nurse at the clinic what the visit was for and an hour was scheduled.

As we waited for that appointment, three weeks away, none of us was sure what would happen, but we tried to be optimistic. Mary Lou had found the application form online. We made an initial attempt to fill it out. From it we knew that we would need witnesses and that there would be a ten-day reflection period once the application was approved.

Laura wrote a letter to her doctor explaining her situation:

I would like to die with dignity while I am still me. In many ways I’m already half dead, especially in the ways that matter to me. My eyesight has deteriorated to the point where it is impossible to keep doing the things that I love, that keep me alive in the real sense. My hearing is such that I cannot participate in any conversation except one-on-one. Even that much is going.

How can I communicate when I can’t see and hear?

My mobility is such that I have to watch every move I make to avoid falls, etc.

I sleep at least 18 hours out of the 24 – the others are hazy and interrupted by my nodding off to sleep.

There is no pleasure in eating.

The most important part of me, my mind, is slipping away. I do not want to talk to anyone really – I just want to curl up in my chair and go to sleep.

I do not believe in an afterlife. I’m 99 and my life has been pretty good. I would like my dying to be good also. Being a vegetable, kept alive just to keep breathing, is a sorry option.

Going to the bathroom is a chore. I’m never sure of what is going to happen.

I have an incomplete spinal injury, one painful sore on my ankle, two legs that are numb (left more than right with sore ankle on right).

My family and friends are more than kind, but they don’t know how alone I feel when the talk goes around me. Then the more I feel alone the more I want to be alone. What little of my mind that is left watches the rest of it slowly going. If it was a part of my physical body that was in such bad shape, there would be no question. Do I have to be a rotting vegetable before I have a right die? Without the ability to communicate (my greatest strength) I am becoming a non-person.

When sleeping is my greatest pleasure I sit and sleep and wait for The Big One.

We tried to be patient. Christmas came and went with Mom’s regular visitors.

A few days before the scheduled appointment on January 4, Laura stopped taking her medication and also stopped eating and drinking. Her medications were for blood pressure, a water pill, and Dilantin for epilepsy. Laura’s “strike” lasted about 24 hours. but her message was clear. She had had enough. Although she began accepting some nourishment, she did not resume the Dilantin. This news of Laura’s “strike” prompted me to travel to Saskatoon.

Mary Lou phoned the clinic to confirm that the doctor was aware of the nature of the visit.

The day of the appointment, her grandchildren from Regina, Daniel and Katie, drove up to visit. They knew this could well be the last time they saw their grandmother. Many such visits would take place in the coming weeks.

Mary Lou and I took Laura to the appointment on Friday, January 4. The clinic was unusually quiet as it was almost the weekend. We were shown to a room, and we decided to try fill out the MAID application a second time as we waited for the doctor. But, like the time before, we did not get very far. We needed to wait to talk to the doctor to clarify some of the questions. We have since learned that we did not necessarily have to begin the process with Mom’s GP.

When the doctor arrived, she had a sheaf of papers with her. She told Laura she would not be able to help her. The doctor read Laura’s letter and a very emotional exchange ensued. Laura was firm that this was what she wanted. The doctor was uncomfortable. Mary Lou and I tried to press for clarity.

The doctor said she would make some calls on Monday. We had been waiting over three weeks for this appointment and the three of us were disappointed. We pressed a little further.

I asked the doctor, if we left the clinic and went for help at an Emergency department of a hospital, would she stand in our way? She said she would not. (Again, we did not realize that the family doctor did not have to be part of this process.)

We were almost ready to leave. Mary Lou said, almost in desperation, that she was not sure what to do. “Mom has stopped eating and taking her medications. What if something happens?”

We think this finally conveyed the seriousness of Laura’s resolve, and the doctor said she would make some calls that evening.

You can read part 2 of Laura and her family’s story by clicking here.