Home / Personal Stories / My Mom, Me and MAID (Part II)

The next morning when I arrived at my mom’s apartment, she appeared calm. She had a list of phone calls for me to assist her with, which I did. She became agitated with me during this process and told me to leave her alone. I did.

I sat in my mother’s living room, feeling guilty that these were her last minutes alive, and she was all alone in her bedroom. But at the same time, feeling relieved that I did not have to deal with her. The doctor contacted me to tell me that he was on his way, and to check to see if the nurse was there to start the IVs. She was not. By the time the doctor came, the nurse was almost an hour late. Once again, I had to cope with the inner turmoil of what would happen if the IVs could not be started.

Eventually, the nurse arrived without having had any contact to say that she was coming or to apologize for being late. After starting the IV, she informed us that she was not comfortable staying in the apartment during the procedure, and would wait in the lobby. The impression I got was that she didn’t approve of MAID. As a daughter, I was insulted. As a health care provider, I was cognizant of the ethical issues of MAID. Mostly, I was just grateful that someone had started the IV so that the procedure could happen.

Then it was time to wait for the doctor to get the medications ready. Having observed a procedure just days prior, I was aware of the number of medications that needed to be drawn up and how long it would take. But being with my mom, waiting for her to die, not knowing what to say or not to say, not wanting to upset her again — the time seemed endless. Then the doctor entered the room with the medication tray. My mom pretended to be asleep. He asked her to wake up to give her final consent and she did. Then as he began injecting the medication, she turned to me and said her final words: “I have loved you Diane, but you were always a difficult child.” I was hurt, but not surprised.

At that moment, as I stood holding my mother’s hand, watching her fall into a deep sleep –  her final sleep – I was grateful that I had the distraction of observing the doctor and his role, as part of my learning, while I was trying to be mindful of my own role as the daughter. I was relieved that when my mother passed, she was not alone, she was not gasping for breath, she was in her own bed, and she was able to die on her own terms. MAID gave her that. I was relieved that my mother was gone, that her suffering was over, and that my suffering would end. MAID gave me that.

So, how did my personal experience with MAID affect my professional development as a MAID provider? I realize that the legislation and criteria for eligibility are vague and difficult to understand as patients and family members may think that a person should be on their deathbed and have no mental health issues in order to qualify.

I know that the referral process is unclear and confusing, to both health care providers and the community. I am cognizant of the emotional turmoil around the assessment process for my patients. I reflect on the weeks of waiting for my mother’s assessments, and try my best to contact my patients immediately after I receive a referral, even if I’m not able to perform the assessment right away and be available to them by phone, as needed.

During my initial phone call, I discuss the written request, to ensure that patients understand the need for a reflection period, and two independent witnesses. I try to be as flexible as possible regarding the timing of the assessment and provision.

I explore family dynamics as part of my assessment to ensure that I am able to support the patient and family appropriately. I inform the patient and family of my decision regarding eligibility as soon as possible. I communicate in a timely manner with the LHIN, ensuring that nursing services are arranged well in advance when I need IVs started.

On my written orders, I specifically request that the nurse meet me at the home to start the IV immediately prior to the procedure and stay present during the provision. I try to establish a positive atmosphere for the provision, and insist that everyone present be supportive. I remind the patient and family when I go to prepare the medications that it will take me a bit of time, but reassure them that as soon as I am done, and they are ready, that I will get started.

I watch the family members and communicate with them during the administration of medications as I know how apprehensive one can feel wondering when death has happened. I try to prepare families for the conversation with the coroner’s office*, and provide them with a pen and paper to write down the phone number they are given, as I know that this can feel intrusive and confusing just moments after you’ve watched your family member die. I am aware that each family is different and how they say goodbye is individual — I make no assumptions about what this should look like, or feel like, for anyone. I understand that a MAID death is often a relief, and that grief is complicated.

*Editor’s Note: In some provinces in Canada, the coroner’s office must be informed immediately after a person’s death.

My mother’s MAID death was not easy, emotionally or logistically, but it was significantly better than the alternatives. It allowed my mother to die peacefully and on her own terms. It allowed me to be with her when she died, when I otherwise likely would not have been. It also provided me a unique perspective of the experience of a MAID death as I began my journey as a MAID practitioner. I know that my mother would be proud of me for the assistance that I provide to others who are suffering as she did. 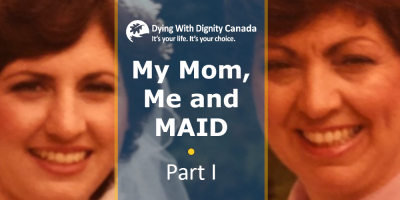 My experience as a new MAID practitioner – supporting my mom through her own assisted death Two years ago, my…