Home / Personal Stories / My Mom, Me and MAID (Part I)

Two years ago, my mom died with the help of medical assistance in dying. She died peacefully, in her bed, in her own home, as I held her hand. Her last words were, “I have loved you, Diane, but you were always a difficult child.”

My mother had always believed in assisted dying. She talked to me about it when I was a young child, saying that “we treat our dogs better than we treat our loved ones.” By the time legislation for MAID passed in Canada, she was quite ill and frail. She had hereditary cardiomyopathy, and was essentially bedridden. She lived alone and was insistent that she needed to stay in her own home. Thanks to the support of Ontario’s home care services, she was able to do so.

Around the time that the legislation was passed, my mom was given a prognosis of less than 18 months. We began discussing MAID, but my interpretation of the legislation made me think she would not qualify. Due to mental illness, my mother had alienated most of her close family members. And when asked why she wanted to die, she would say, “I have no family. I have no reason to live.” In addition, soon after, my mom broke ties with me and the discussion ended.

Almost a year later, I heard that my mom’s doctor had referred her for a MAID assessment. I reached out to her and we reconciled. By that time, she had lost her vision and was firm in her belief that she had no life and was simply existing. I had just begun my journey as a MAID assessor/provider, so I asked my mentor if my mother’s mental illness would affect her qualification. I was told that it would not, as long as mental illness was not driving the request and she was capable and competent to understand the implications of her request. This was a turning point in my education of mental health issues and MAID.

Weeks went by without any follow-up from her doctor’s referral. I spoke to my contact at the Care Coordination Service (CCS) and was told that my mom had not been referred to them. Apparently, she had been referred internally through the doctor’s hospital system, but that was only for in-hospital patients. My mother was very frustrated with this delay, but soon after I was told that the community referral had been completed. Unfortunately, we waited weeks before she was finally contacted, and a home visit was organized for an assessment.

As I understood the issues around the written request, and due to my mother’s very limited social network, I was able to arrange for volunteers from Dying With Dignity Canada to witness my mother’s signing. This happened in a timely manner and uneventfully, which was much appreciated. However, it left her expecting that she would be able to have MAID 10 days later, which was not the case for her. The initial assessment was long and exhausting for my mother. It was a new assessor who was not yet a provider, so she was doing the confirmatory assessment. This was very confusing, and unfortunately, she could not answer many of my mother’s questions.

One of my mom’s common complaints to me was that she wanted me to be her daughter – not her nurse. I have never been very good at not being a nurse. It’s an essential part of who I am and something I am very proud of. My experience with MAID was still quite limited at that time, but it was more extensive than the assessor’s. This complicated our already-difficult relationship as I had to take on the role of answering my mom’s medical questions regarding MAID. The assessor contacted me within a few days to inform me that she felt my mother qualified, and suggested that the primary provider would be in contact shortly. By this time, my mother was quite anxious “to get on with it.” Unfortunately, we once again waited weeks. My connections in the system meant I was able to make direct contact with the primary provider, and we had a detailed conversation. I provided him with some background information and he agreed to book both the assessment and provision dates (assuming he found her eligible) at that time. When I informed my mother by telephone that the next steps had all been arranged, the relief in her voice was palpable. Although this was less than two months from the initial referral, and about a month from the community referral, it definitely seemed much longer!

Meanwhile, I was dealing with family issues. My brother was being very negative; he does not believe in MAID and would not support my mother’s decision. My father, who was 88 years old and separated from my mom for 15 years, believed she was having ‘legal suicide’. My sister’s family spoke to Rabbis to try and understand if a MAID death meant that she would not have to participate in the ritual mourning period — they were told ‘yes’ by one Rabbi and ‘no’ by another. The grandchildren didn’t know if they should feel guilty for not wanting to say goodbye. My cousin told me that I had not been a good daughter. Trying to be supportive of my mother’s demands was challenging. Families can be difficult.

As the days neared for my mom’s provision, I became apprehensive – not about her death, but about how I would separate my learning from my personal experience. At that time, I was preparing to become a provider. Luckily, I was able to attend my first provision just a few days before my mom’s so that hers was not the first MAID death that I experienced.

When the Local Health Integration Network (LHIN) called the afternoon prior to her scheduled provision date, they informed me that they were not sure if they could get a nurse in to start the IVs. I went into a panic:

Thankfully, about two hours later, the LHIN called back and said they had been able to find someone to come in and start the IVs. The equipment and medications had been delivered to her house. The doctor was good to go. I slept fitfully that night. 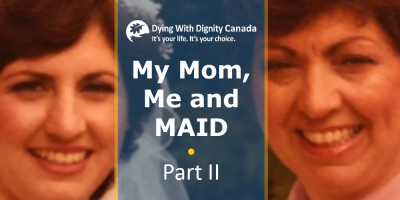 The next morning when I arrived at my mom’s apartment, she appeared calm. She had a list of phone calls…