It was during the COVID-19 pandemic of 2020 that Mark Huddleston decided it was time to begin arranging his medically assisted death. Mark was diagnosed with prostate cancer in 2012 and lived six years beyond his original prognosis. Mark was a positive and progressive guy. His wife Jacqueline said, “He always found the silver lining, even in declining health.” So, when his MAID physician Dr. Jonathan Reggler suggested they consider an outdoor end-of-life ceremony, they embraced the idea. It meant they could invite more people (maximum 50 according to the COVID-19 restrictions) and create a very special experience with the help of their community.

Mark and Jacqueline lived in a cohousing cooperative. “The beautiful ceremony we decided to have for Mark, that he was part of planning, would never have happened if it wasn’t for this community,” Jacqueline shared. She was consumed with Mark’s care and helping arrange people who wanted to visit with him, so the community took care of all the other details.

Mark felt that as North Americans, we have lost old traditions around death and dying. That we basically ignore it until the very end. We act as if we are going to live forever and we don’t have traditions and rituals to help us cope. Jacqueline explained, “For Mark, it seemed fairly clear that dying publicly, having witnesses, inviting people to come at the end, made perfect sense. It was a way to take a very different road and that’s what he wanted to do.”

Mark and Jacqueline invited everyone in their address book and left it up to them whether they would come or not, and it turned out that exactly 50 people said yes, they wanted to be there and wanted to say goodbye. People were invited to be part of the ceremony in any way they wanted. They could sing, read poetry, bring their children, whatever it was, whatever people felt comfortable with, it would be incorporated into the ceremony.

The co-housing community got busy clearing the path to the river. They built a wooden stretcher, so that Mark could be carried comfortably from the cabin to the beach. They even rigged up a battery to Mark’s hospital bed so he could sit up at the ceremony. A friend from the community built Mark’s coffin and another carved a poem into the lid. They included traditions of the First Nations people who had lived on the land. The children wanted to make paper lanterns and to lead the procession. They organized it all so Jacqueline could focus on Mark.

As people arrived, they were asked to go out on the land and collect a bouquet of flowers or greenery to lay at Mark’s feet. This was meant to help people take their time and settle into the rest of the day. At the end, after Mark died, people were asked to collect their bouquet and return it to the land to again, give themselves some quiet time to regain their composure and recover from what they had just seen and been a part of. 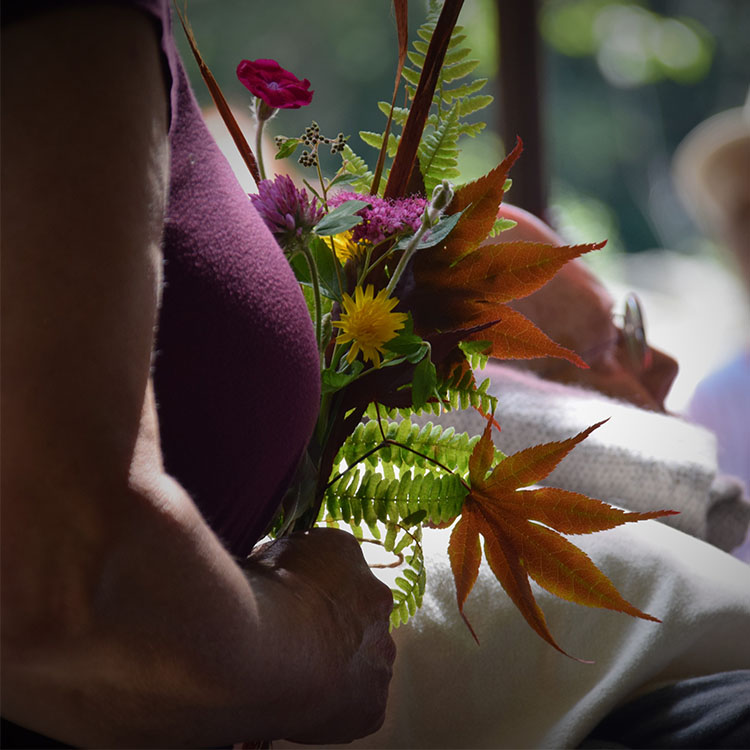 Dr. Reggler recalls when he arrived at the ceremony with the registered nurse, Sheena Fraser. “There was a path, a fire burning, drumming and singing. We asked if we could move closer and the community invited us in. There was no sense of any rush, the community made absolutely certain Mark knew just how important he was to each of them. It was remarkable.”

People sang, played instruments, read poetry, they even told jokes and laughed. Jenna, a friend, made Mark a very decadent chocolate cake – his favourite. He took a piece, he toasted the audience by saying, “death by chocolate.” “He was just being himself, he was being funny and sweet,” recalls Jacqueline. 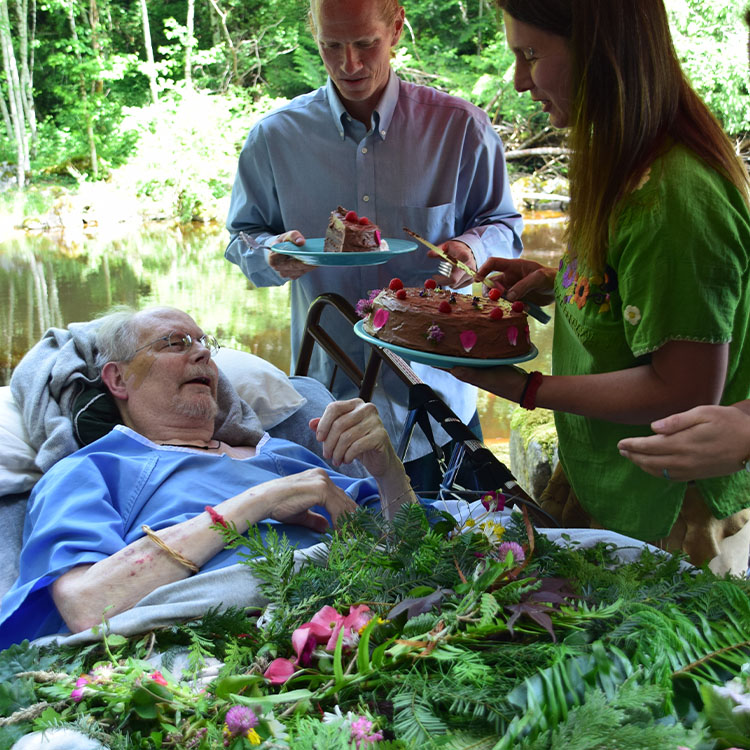 Once everyone had said what they needed to say, a community member indicated that it was time for Dr. Reggler and nurse Sheena to come forward. Dr. Reggler explained, “There is a bit of paperwork and I always read the consent out loud so everyone can hear exactly what the person is signing. Sheena then put in the two IVs. We always use two, one and a spare in case something happens to the first, we can smoothly and without trouble use the second. Whilst Sheena was doing that, I explained to everyone what they are going to see, because I don’t believe that there should be any mystery or surprise for anyone. I explained that I was going to use quite a few syringes, that the first one would put Mark to sleep within 30-60 seconds. The second is a local anesthetic to numb the inside of the vein because the third drug can cause slight burning. This third drug puts the person into a coma and stops them breathing, of which they are completely unaware. It is this that leads to their death. I tell them that they may hear a little snoring, that Mark would turn slightly dusky and then pale. When I thought that Mark’s heart had stopped, I would listen with a stethoscope to confirm and then I would let them all know he had died.”

During the MAID provision itself, some members of the co-housing community gathered around Mark’s bed and sang a song about trees and the cycle of life. Jacqueline recalls, “The kids that live here were just raw. They were crying and wailing throughout the last song. But 10 minutes later, they were all playing and running around and that felt just right. It felt normal that there should be sadness, rawness, grief and then playfulness and joy. I know that Mark would have loved that.” 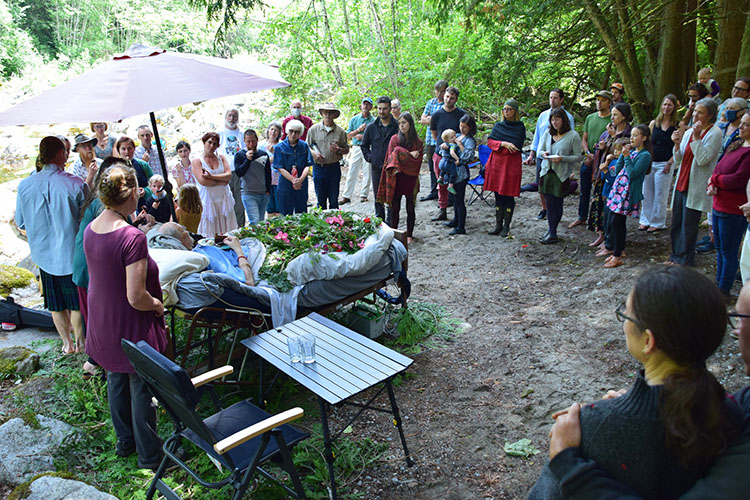 After the ceremony, Jacqueline received an enormous amount of feedback from people who were so grateful that they had chosen to attend the ceremony. Some felt as if something that had been broken before had started to mend. “It’s hard to define,” Jacqueline explained. “The experience has deepened our relationship with one another. We just carry each other on a different level now.”

Sheena, the attending nurse, said, “It re-instilled and strengthened the passion I have for the program and what it’s all about. It’s about having the right to choose, the ability to have the people you want with you, and to make sure you do it your way.”

“Most people won’t have this death,” Jacqueline said. “It’s the perfect death in a way. You get to say your goodbyes, you get to feel and see your loved ones and you get to die painlessly and calmly, in your own setting and choosing. I think that is a gift. MAID is a gift.”

Ten days after Mark’s death, a friend from the co-housing cooperative, Lana, had a baby and Jacqueline was there for the birth. 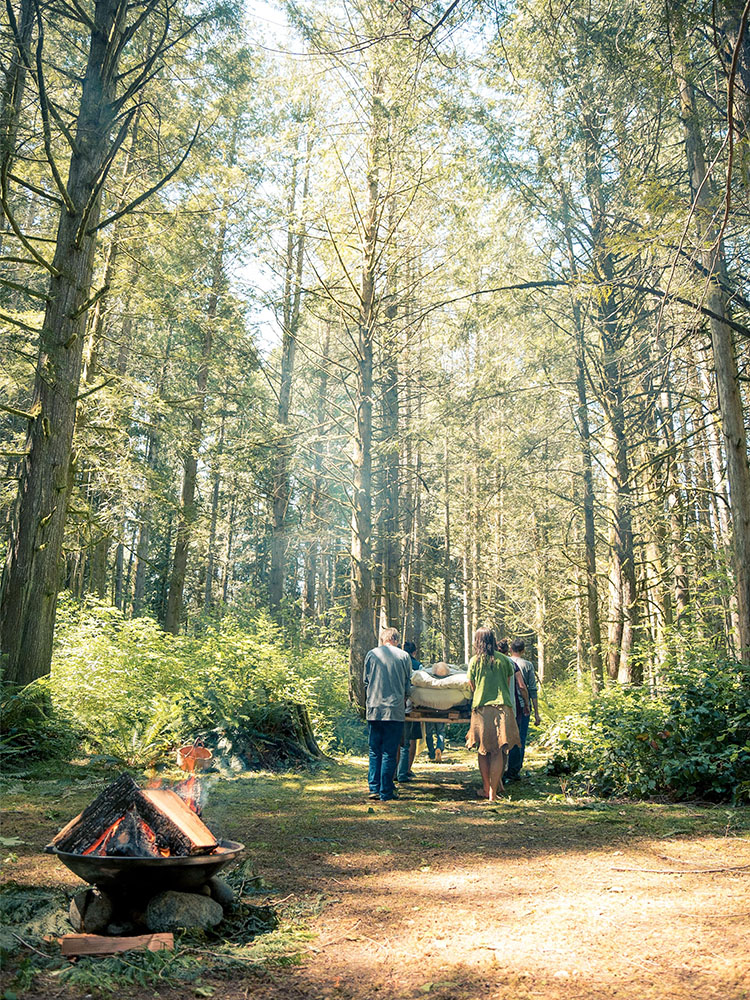 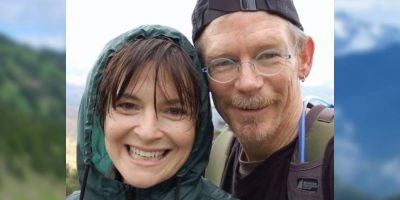 In the fall of 2020, one of our board members, Dr. Jonathan Reggler, shared an article from Powell River Living Magazine with Dying With Dignity Canada. It was a story about Mark Huddleston, a gentleman from British Columbia who chose medical assistance in dying (MAID) and his very inclusive, outdoor end-of-life ceremony. 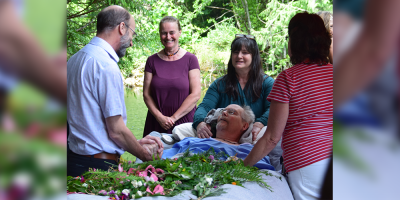