Judy’s story: I support advance requests for assisted dying because my husband’s last years were horrifying

When Brian was diagnosed with an aggressive form of Parkinson’s, he and his wife, Judy, read everything they could about his disease and his prognosis. They wanted to be ready and to know what to expect. Sadly, nothing could have prepared them for a reality that was far worse than they had ever anticipated. In this blog post, Judy, who asked that her real name not be used to protect her privacy, writes honestly about her husband’s horrifying last years and why she wishes his right to end-of-life choice had been respected.

When my husband, Brian, was diagnosed with Bradykinesia Parkinson’s, an aggressive form of Parkinson’s, the neurologist told me that I ought to place him in a nursing home immediately as I wouldn’t be able to cope. Every day for months following that day, Brian kept saying, “I am sorry, I am so sorry” over and over again. We did our research online to see what the prognosis would entail. It was not pretty. The reality was worse.

It is one thing to see the clinically written accounts of the five stages of Parkinson’s, but nothing can prepare you for the emotional tidal wave or what those clinical details really mean.

But nobody talked about the obsessive-compulsive disorder (OCD) that would develop. We weren’t prepared for his obsessions with buttons, like those on the TV remote. Up, down, up, down, up down. Or the car window — up, down, up, down — to the point he burnt out the motor in the car’s side door.

He lost the ability to talk but could still sing — for a while. We had a machine he could use to type out what he wanted to say and it would speak for him, but the OCD kicked in and he would keep pressing the talk button repeatedly. We went to a spelling chart that worked at first, but then after some time, I noticed his spelling was becoming phonetic. Eventually, it became nothing but gibberish.

Walking and falling became the norm. He had a hole in one of his knees that would not heal despite knee pads and nurse’s dressings. If he wanted to get up, Brian would wait until no one was watching him, then boom-bang, he was down again, and I would shudder. The walker went, then the scooter came, and then the scooter went and the wheelchair arrived — all within a six-month period.

His food went from moist food and thickened drinks, to mushy, to puree, to a stomach tube. Who said anything about a stomach tube?

People may think they could live with incontinence. TV ads make it look so simple to wear Depends. But the reality is that movement throughout the night can cause the Depend to move and then the bed would become wet. However, it isn’t just the urinary leakage, it is also the loss of control of the bowels. Does anyone talk about the end stage when people play with their feces?

Three years after the diagnosis, I could no longer cope. I had home care six times a week, Brian was in adult day care twice a week, and he was in respite for six days every six weeks. I had suffered two broken bones from trying to break his falls. I had nothing left and collapsed on the floor and was found by home care 32 hours later. My husband was left to fend for himself — what he did, I have no idea. At the time, I was 55 years old and he was eight years older.

At first, Brian was in a nursing home, but that only lasted nine months. He was making fewer attempts to stand up, his food was now pureed, and at times, he did not recognize me despite going in to see him almost every day. It is mentally exhausting to watch the person you love fade away. He was needing more and more 24/7 care so I had him moved to the hospital.

Shortly after that move, Brian asphyxiated on his medications. Without the medications, he would freeze up completely and his medications could not be injected. Have you ever watched someone choking for five hours straight? The terror and helplessness in my husband’s eyes sickened me, leaving me feeling nauseous in the pit of my stomach.

It was suggested that he get a stomach tube put in. At this point, I would have said “yes” to anything to stop the suffering, but no one tells you the horrors that come with the stomach feed. 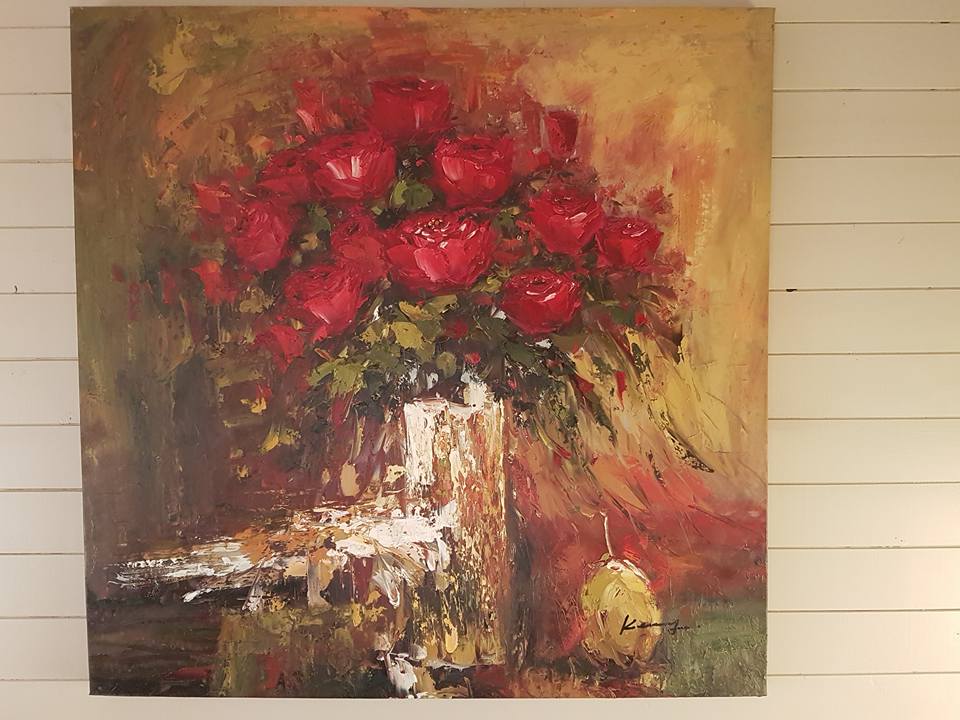 Shortly after his diagnosis, Brian purchased this painting for Judy so she would have flowers on those special occasions when he would forget.

I want to stop here and interject. If I only knew then what I know now, I would have stopped the madness right there. It was within my rights and his rights since “no heroic measures” was written on his representation agreement. No one explained what would happen next. That, in my humble opinion, is the fault of the medical staff who, at times, have their own agenda: to keep patients alive at all costs. And for what benefit? Saving another soul from death — even though it is always inevitable? What about the cost to the patient and the cost to their family? Brian would have died within six weeks without the stomach tube. Instead, the worst was yet to come, and his suffering lasted another year.

Once I agreed to the surgery for a stomach tube, they put a tube down his nostrils to give him his medication. He kept yanking it, perhaps because it was irritating, and they kept shoving it back down his nostrils until they finally decided to restrain his arms.

Brian had the surgery to have the stomach feed put in, but his arms were restrained again to prevent him from pulling it out. I had no idea what he was thinking or feeling at this point because he could no longer communicate; what I did know is that I could hear his quiet moaning and I could see the blank, dull stare in his eyes. Brian could stare at the ceiling for hours without blinking — even when you got right in his face, he would just stare right through you. Imagine how dry and painful those eyes got.

His body was shutting down so he was unable to swallow, but when you think about it, which I didn’t at the time, what happens when the bowels are no longer functioning? No one tells you about that. What the hell are we doing forcing food in someone and forcing fecal matter out? On bowel movement days, he was kept in bed and I could not see him.

On non-bowel movement days, the staff would get him dressed and wheel him into the lounge. He would be tucked into some corner of the room near an electrical outlet so the nurse could give him his medications four times a day, plus three feedings per day. He couldn’t move much and he couldn’t communicate, so he would simply stare into space. At times, care aides would forget he was even there. As a musician himself, Brian enjoyed listening to music, so I tried to get the staff to put his headset on and play his CDs like I did. Some staff did, but others didn’t. So, there he sat one day, unmoved for seven hours. From that neglect, he got a hole the size of a quarter on his coccyx that went right to the bone. It never healed.

No doubt some fecal matter got into that gaping hole — and that gave him septicemia. Twenty per cent of people don’t survive septicemia and only 50 per cent of people aggressively treated with antibiotics survive septicemia shock. Seven months after the stomach feed was put in, Brian went into septicemia shock. At this point, he had zero quality of life. His doctor explained to me that, even if he was treated, he would not get better and would be worse off than he was before. Again, I honoured his right to not have it treated aggressively with antibiotics so he was placed into palliative care where he was expected to slide into a coma within seven days. I thought he would finally have a peaceful death.

I came in the next day to find staff with Brian’s old spelling chart, telling him to spell his name and their names, and to touch the yes or the no button. I asked them to leave him alone and they told me, “We are doing our job.”

“To do what?” I asked. I had been married to Brian for 25 years and this staff felt they knew him better than I did. To them, I was meaningless. I stood back and videotaped the rest. And no, Brian could not spell their names or his or answer their questions correctly much to their annoyance – now on tape forever. What they were doing was trying to prove that Brian could make his own medical decisions as if he ‘miraculously’ recovered. I say that with tongue in cheek because the reality was that he was far too sick to recover. Yet, he was still treated by staff who felt they were doing God’s work and that superseded our rights — but that is another story.

Brian spent the rest of his days mostly lying in bed, wasting away wearing diapers and moaning, groaning and staring into space while battling a high fever that gave him open sores all over his body. He was turned every two hours by staff dressed in masks, gloves and gowns because, let’s face it, none of them wanted to get septicemia. He died six months later when he asphyxiated on a bit of green sponge used to clean his mouth. That was his worse fear: to choke to death. He deserved a far better end of life than the one he got, and my failure to give him the dignity he deserved will forever swell my eyes with tears.

Dying With Dignity Canada extends a heartfelt thank you to Judy for sharing this painful, heartbreaking story.