In this powerfully candid entry for the DWDC blog, British Columbia’s Johanna Clark remembers her husband Neil’s final months following a lung cancer diagnosis in 2017. Neil accessed his wish of a medically assisted death in May 2018, with the heartbreaking knowledge that he could have lived for longer. Neil, worried about losing capacity and knowing that the federal assisted dying law requires final consent at the time of the procedure, chose to end his life early to ensure he could have the assisted death he wanted.

When the Canadian Parliament passed Bill C-14 on June 17, 2016, amending the Criminal Code of Canada to allow medical assistance in dying (MAID), my husband Neil and I were proud of our government for being far-sighted and progressive. We also agreed that the government critically erred by failing to allow the right to pre-arrange a medically assisted death through an advance request. We never thought it would ever apply to us.

It wasn’t until Neil was diagnosed with lung cancer on December 1, 2017 that the realities of the new legislation would come to haunt us. 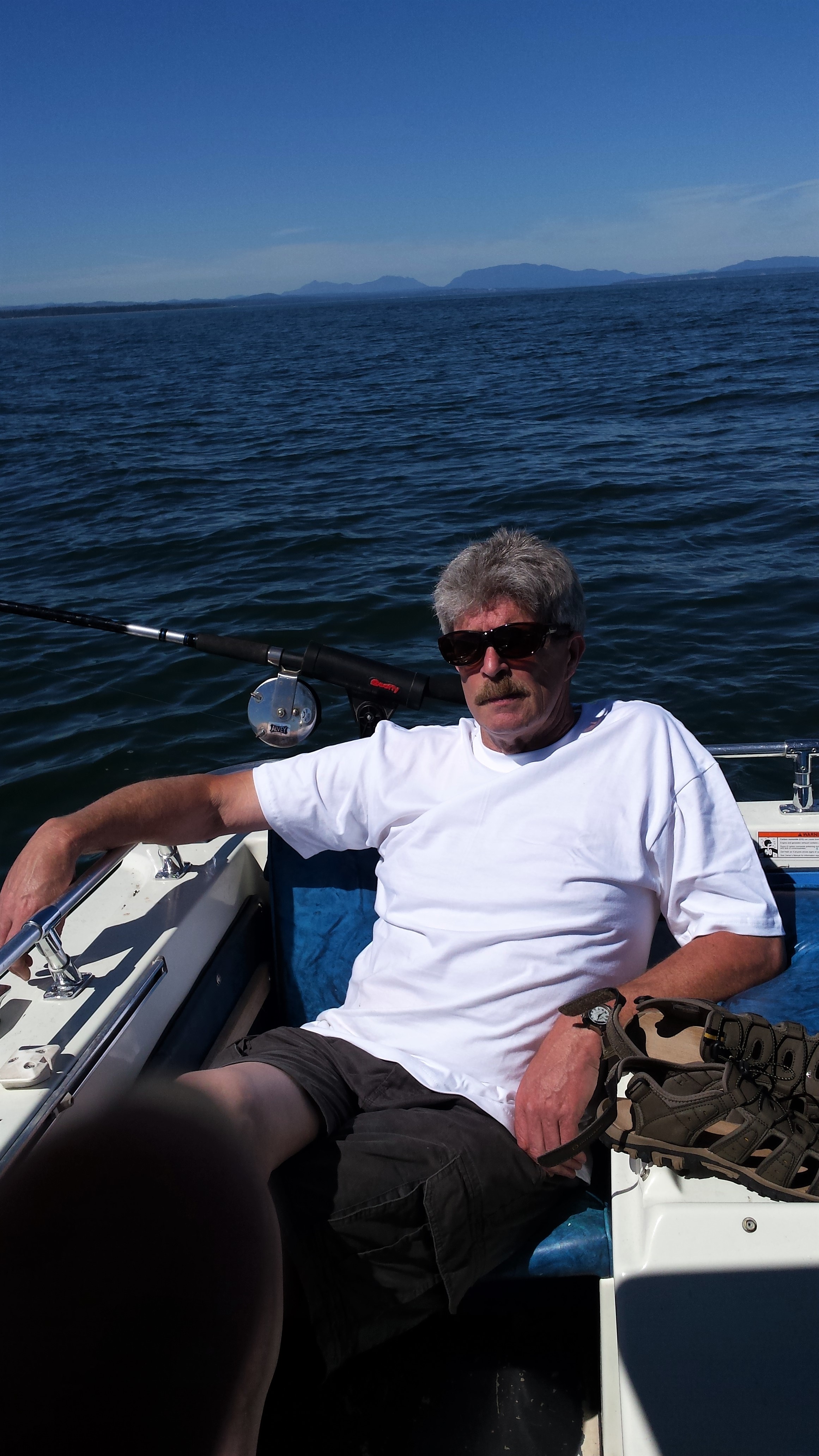 Neil on their little fishing boat four months before his diagnosis.

Towards the end of October 2017, Neil began suffering from a persistent cough so he went to see his family doctor. We were in the middle of downsizing to a new home and new owners were getting ready to move into our old house. The doctor ordered an X-ray, which Neil had the following day. The doctor told Neil his office would call if they found anything amiss. A month went by and no one called. Neil was very relieved and carried on with the move into our new home. But his cough continued with intensity. At the end of November, one month from his initial visit to his doctor, Neil went back. The doctor then looked at his X-ray and immediately ordered a CT scan, which Neil had the next day. The day following his CT scan, Neil was diagnosed with lung cancer. We were completely and utterly devastated.

On December 21, 2017, Neil had an appointment with his first specialist, a respirologist. We were told he had non-small cell lung cancer, but that it was at a stage where removal of the affected part of his lung could be possible through surgery. We remained hopeful.

On Christmas morning, Neil became very ill and had a temperature of 104 degrees. I took him to emergency. After 40 minutes, he was admitted to a room in the emergency wing. He was diagnosed with pneumonia and given an antibiotic IV. We sat in the emergency room all Christmas Day, after which he was released with a prescription for antibiotics.

Many days passed and we still had not heard from the surgeons in Victoria. I began calling their office regularly. He finally got in two weeks later and we were told that he would have to go for a PET scan in Vancouver before they could operate. The surgeon said the PET scan was the “gold standard” by which they decided on surgery. The surgeons’ office contacted the PET imaging facility in Vancouver. Neil was told he would have to wait six weeks to get in! Once we got home, I began calling the PET imaging centre, eventually managing to get his wait time down to four weeks. By this time, Neil was coughing up blood. His coughing was non-stop.

Four weeks later, we flew from Vancouver Island to Vancouver Inner Harbour by sea plane. We checked into a hotel and the next day, Neil had the PET scan. Several days following our return home, I again began calling the surgeons in Victoria and more than two weeks later, we got an appointment. But it was too late. Neil was told his cancer was too far gone. He would have to go to the BC Cancer Centre in Victoria for chemotherapy and radiation. 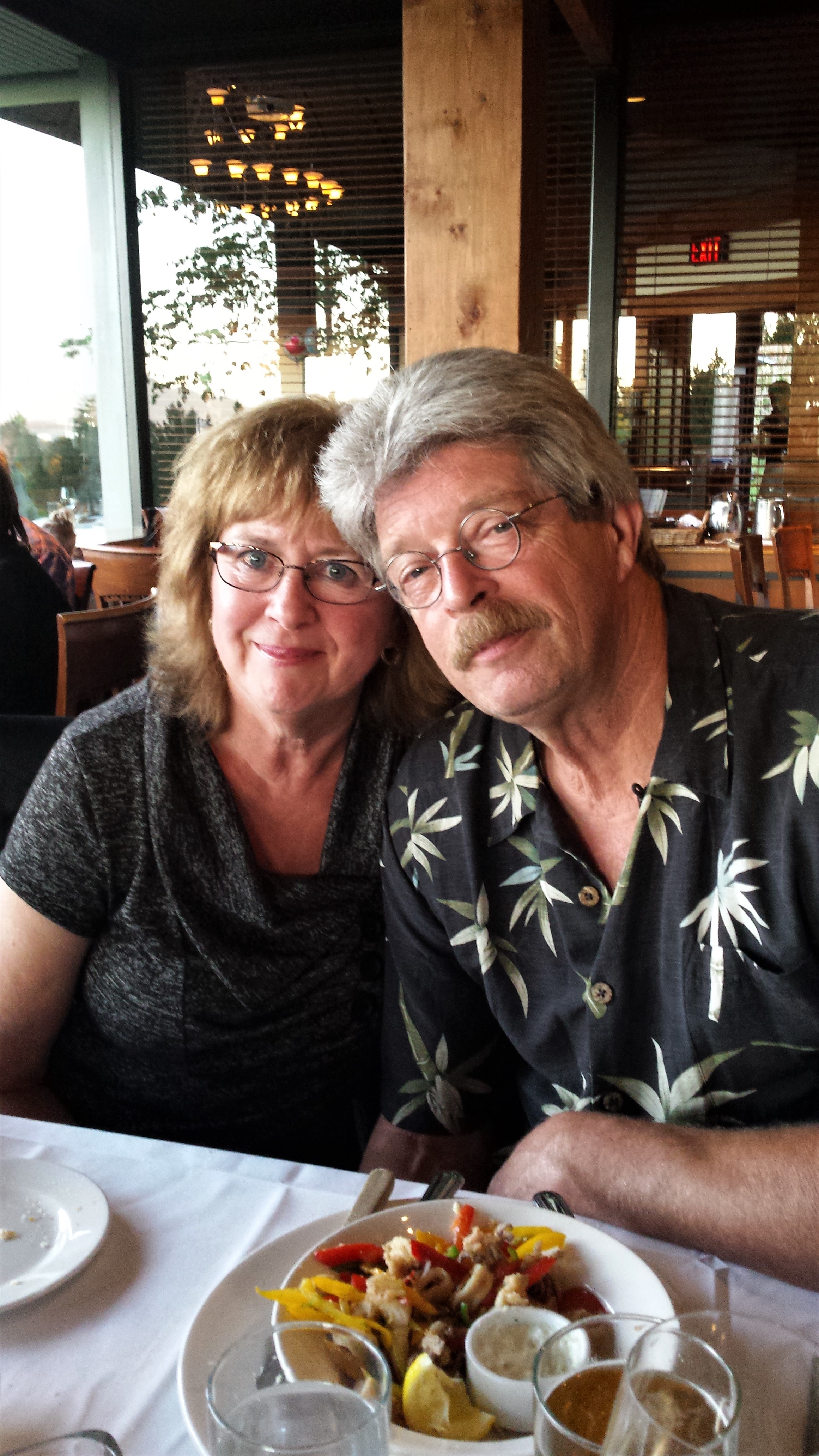 Neil and Johanna enjoying a dinner out three months before his diagnosis.

Neil endured five chemo treatments and six radiation treatments at the BC Cancer Centre, Victoria, before his pneumonia returned. All treatments stopped. He spent seven days in Royal Jubilee Hospital and returned home in a medical transport van. The oncologist in Victoria told Neil he had stage four lung cancer and once he felt stronger, he could continue with chemotherapy treatments. But Neil never got that far.

In mid-March, almost five months from his initial visit to his family doctor, Neil was back in the hospital with pneumonia. After several days in hospital, the doctor advised Neil that his condition was terminal and he was given a palliative designation. It was then that Neil decided to start the proceedings for MAID. The doctor qualified to administer the procedure came to Neil’s hospital room and proceeded with his assessment. After two independent clinicians assessed Neil separately, it was determined that he qualified, so he picked a date two months from then, on May 17, 2018. He wanted to die at home. Once he was out of the hospital, Neil completed the application process, and we waited.

Neil became a shadow of his former self and got very thin. Before his illness, Neil was a robust man at six feet four inches, full of life and excited about buying a boat and beginning the next stage of our retirement. He was a master fly fisherman, an accomplished jazz drummer, and a very popular musician in our community. Now, he was in constant pain and his pain medication dosages had to be steadily increased.

The day before his death, Neil went fly fishing at his favourite nearby lake. He determinedly carried out the arduous task of walking up and down a steep hill carrying his float tube and fishing gear, while dragging a severely swollen leg and foot. 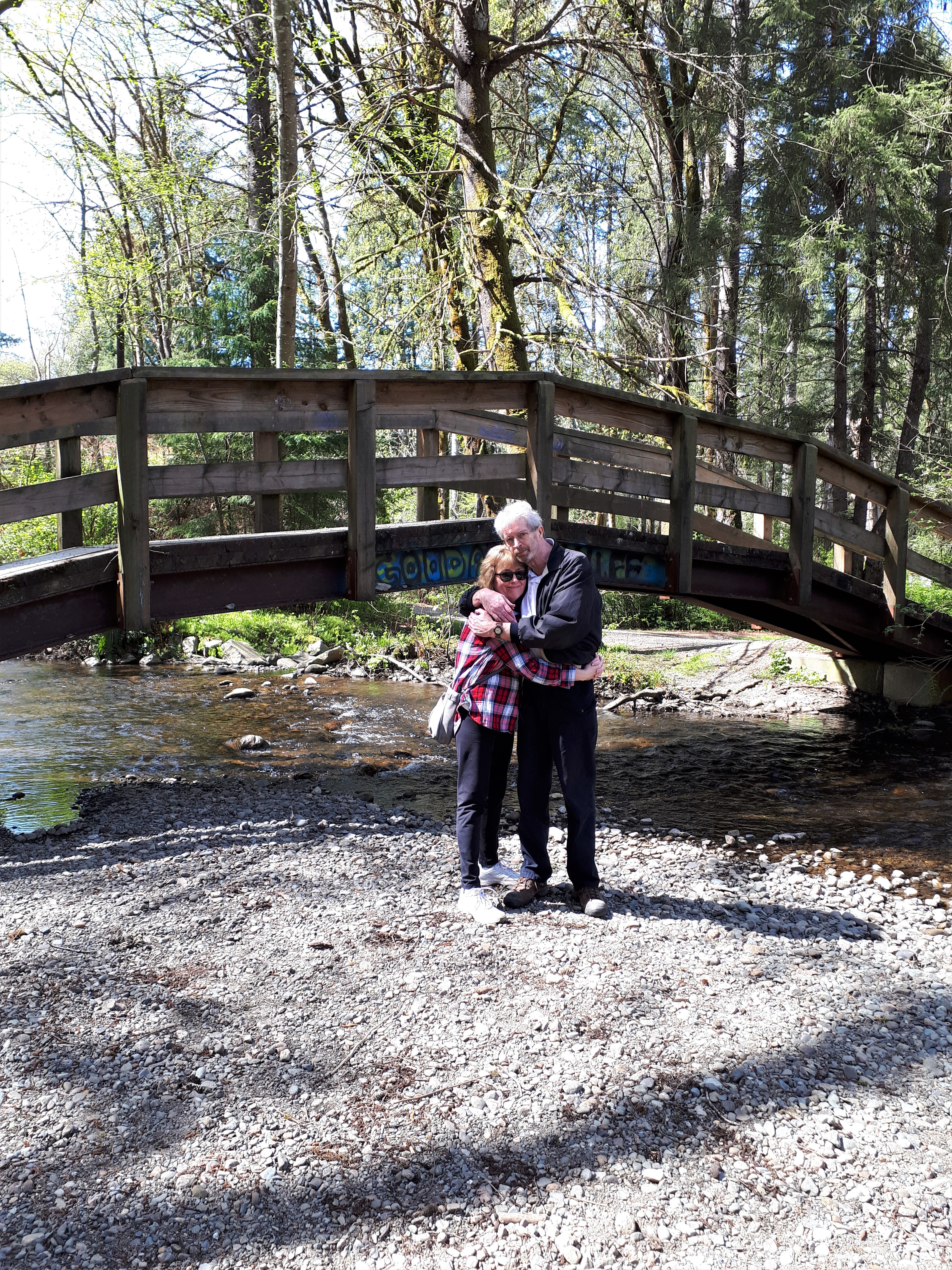 Neil and Johanna four months after his diagnosis.

Neil asked our family members to attend his day of death. He had researched how other MAID patients had chosen their last day. I had to go to the funeral home and make arrangements for them to pick him up. It was surreal. As May 17 drew closer, Neil’s disease progressed rapidly. He was still able to care for himself and the persistent coughing had stopped. He was still mentally very sound and we discussed the agonizing realities we were living with. We cried constantly and held onto each other.

Neil had a final meeting with his family doctor, who was making house calls by this time. Neil still needed reassurance that he was making the right decision to go ahead with MAID. His doctor refused to give Neil a definitive answer, stating that MAID was a choice only Neil could make. The doctor did reiterate that Neil’s illness was terminal and that he had a bed reserved for him at hospice if he wanted another choice. Neil absolutely refused to go into hospice.

The biggest caveat to the MAID procedure is capacity. Under the federal assisted dying law, a person must have capacity at the time of the procedure. Neil was terrified he would lose his mind before the date of the procedure. We fervently wished he could have prepared a legal document, a pre-arrangement, like a will, that would communicate his consent for MAID in the event he could no longer speak for himself.

May 17 was a hot sunny day and Neil sat outside with our family until the doctor and his nurse and a nurse in training arrived. Neil and I went into the house and the doctor and nurses followed us down the hall to the bedroom. The doctor went over everything again and Neil gave his consent. The cannula was inserted into his arm. Neil asked the doctor if he could go back to the living room and have one last dance with me. During our dance, which was more sobbing than dancing, Neil whispered in my ear that he knew he could go on longer but he knew he couldn’t take the chance with the law the way it was. And I believe he could have lived much longer! It was absolutely heartbreaking. Once the music ended, Neil and I walked down the hall and we both lay down on the bed. He once again stated his consent, the drugs were injected into his cannula, and he died in my arms. He was 66 years old and we had been married for 22 years. 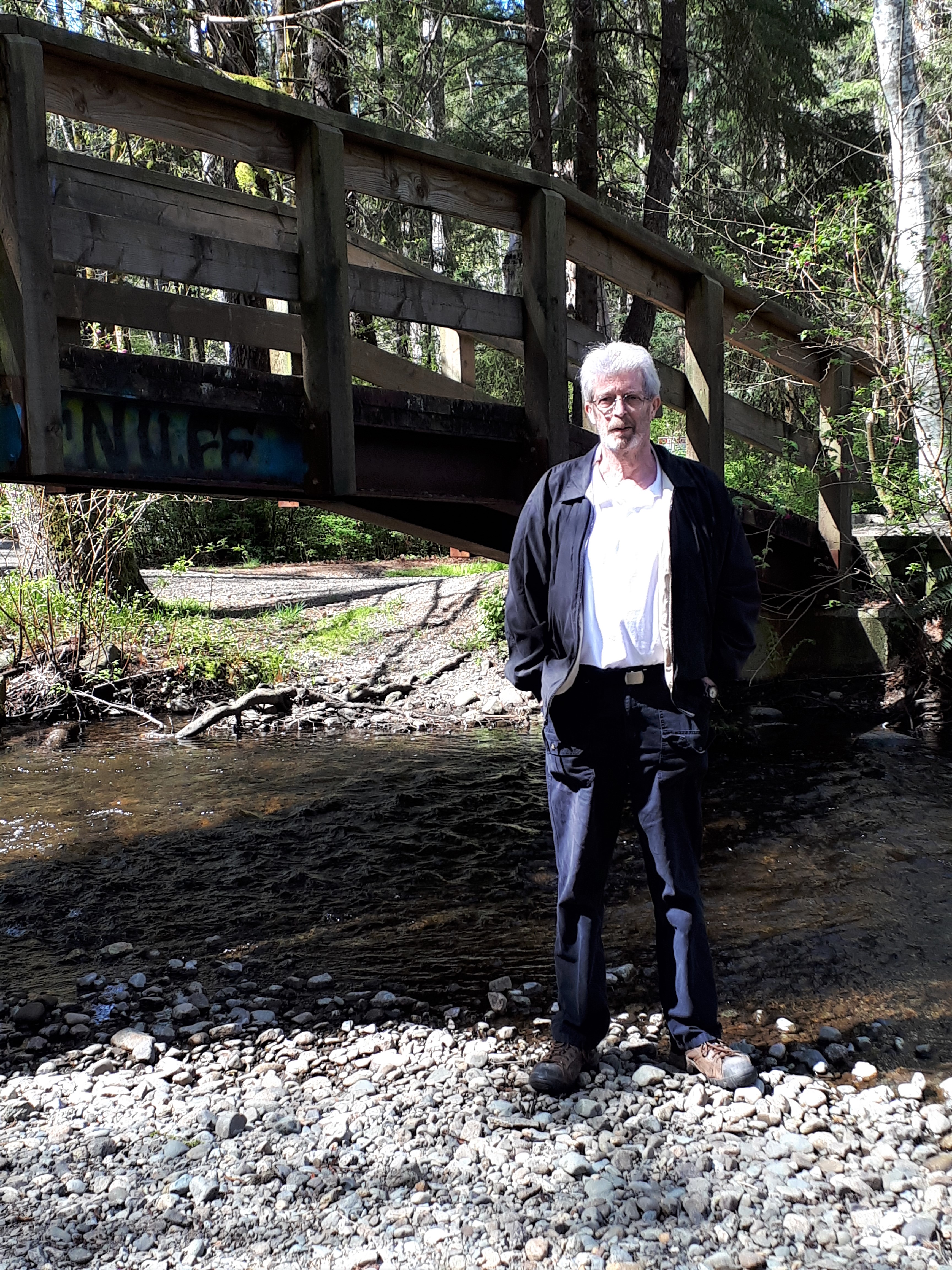 Neil, four months after his cancer diagnosis. (All photos courtesy of Johanna Clark)

I still have the unwavering belief that MAID is an essential and valuable choice for Canadians and I am very thankful it is the law in Canada. However, the Canadian government needs to amend its legislation so that people like my husband and Halifax’s Audrey Parker could have lived a longer life, knowing that their wishes for an assisted death would be met in a more humane way through pre-arrangement. It takes an unspeakable act of bravery to deliberately go through with ending your life at a specific time with full clarity of mind. Federal cabinet ministers can blithely say that they are confident in the federal legislation as written, but perhaps they would change their minds if they had to actually experience it.

I believe the health care system was grievously inconsistent in my husband’s care, and I believe the Canadian government hastened Neil’s death by prohibiting the option of an advance request. To know you are dying is torment enough. To force you to plan your own death with such clarity and deliberation is cruel and merciless.

Dying With Dignity Canada is immensely grateful to Johanna for sharing Neil’s heartbreaking and important story. We will continue to campaign for the end-of-life rights of people, like Neil, who have been Assessed and Approved for medical assistance in dying.