Jenny’s story: Loving my mother and learning how to navigate the choice of an assisted death

Home / Personal Stories / Jenny’s story: Loving my mother and learning how to navigate the choice of an assisted death

Watching a family member access medical assistance in dying (MAID) can be a complicated emotional experience, one that Nova Scotia’s Jenny Hasselman knows all too well. Hasselman supported her mother — her favourite person in the world — on a journey with assisted dying after her mother’s pancreatic cancer diagnosis. Now, she is sharing her story as part of her healing process with the hope that her words will normalize the procedure and shine a light on a flawed requirement in the law.

This phrase will always signify both an ending and a beginning to my journey with medical assistance in dying (MAID). My Mom, my favourite person in the world, sat on the edge of a hospital bed and sighed heavily as she said it. It was the turning point we’d all been holding our breaths to hear. She had already gone through the MAID assessment and approval process, but hadn’t yet decided when she was ready for the procedure.

But when she said those six words, I knew it was time.

We were alone. My Dad and my brother and my sister-in-law had gone for the night, and my husband was generously holding down the fort at home with our two little kids. She and I were together getting ready to tuck in for the night. I just couldn’t bear the thought of leaving her side. 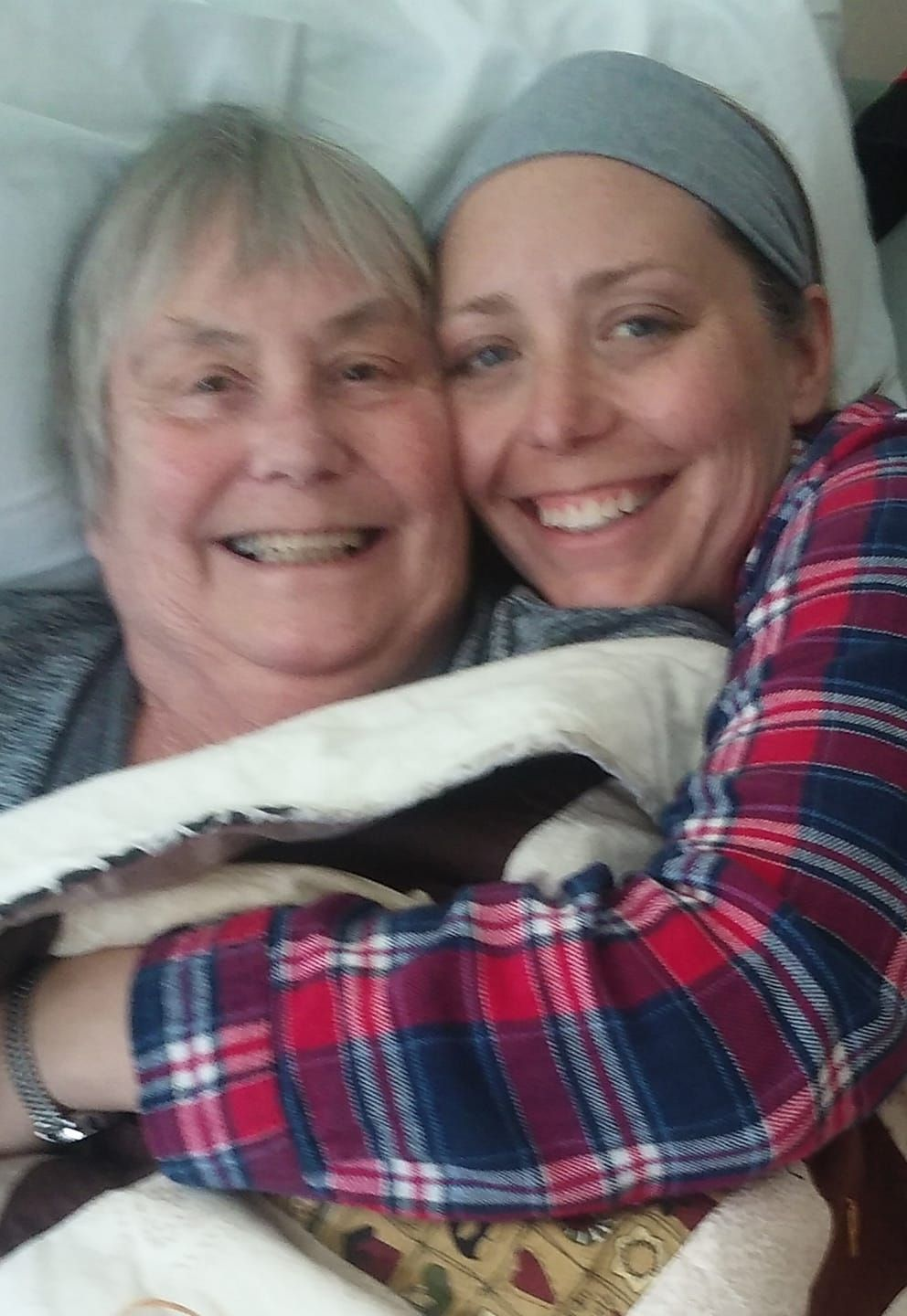 Jenny and her mom, Louise, in May 2018 — their last Mother’s Day together.

The night before had been like a slumber party, with the two of us giggling and sharing secrets and shedding tears along the way. We both knew our time together was limited, but somehow, we managed to sneak in one last mother-daughter bonding date. The next night, however, was very different. Something had changed. She described it as having the floor drop out beneath her. She was confused by how things could change so fast, but none of us knew how any of this was going to play out.

I knew when I heard her tell me she wanted to let go, that it meant I needed to respond with, “Well then, I think you’ve made a decision.” She sighed again, but this time, it was with a palpable sense of relief. I tucked her in and watched her slowly drift off to sleep, knowing it was her last. Somehow, I managed to sleep too. The next day was going to be the worst of my life.

“Nothing can prepare you”

None of this felt normal and none of it was anything we were prepared for. The word “surreal” felt like an understatement. There hasn’t been a generation yet that has normalized this. It felt akin to when my Grandmother would whisper to people that her husband “had cancer” or “the big C.” That whisper somehow eased the discomfort for herself and others and lessened the strangeness of it all, the shame that is impossible to understand but feels that way all the same. We do the same thing around miscarriages. We hesitate to share our experiences, to save the other person the difficult position of not knowing how to console the other, or we fear judgment. I have two beautiful children, but I’ve been pregnant five times. I still find myself torn as to whether to share my losses with people. Many just don’t know how to respond the “right” way, so they say things that make you feel worse and then it doesn’t feel worth the sharing of it all. I felt the very same about whether to share that my Mom utilized MAID in her death. Just figuring out how to phrase it — “utilized MAID” — still sounds cold in a way that I struggle with.

We are not accustomed to watching someone die, or watching a nurse put the IV line into someone you love before their assisted death. The common perception is that IVs provide nourishment, medicine, a lifeline. There is nothing that will prepare you for having a normal conversation with a completely lucid loved one, and then minutes later, watching nurses wheel in a cart with three injections that you know will mean their end. Nothing can prepare you for getting up and saying goodbye to the love of your life, taking her rings and then sitting back down and watching others take their turn. 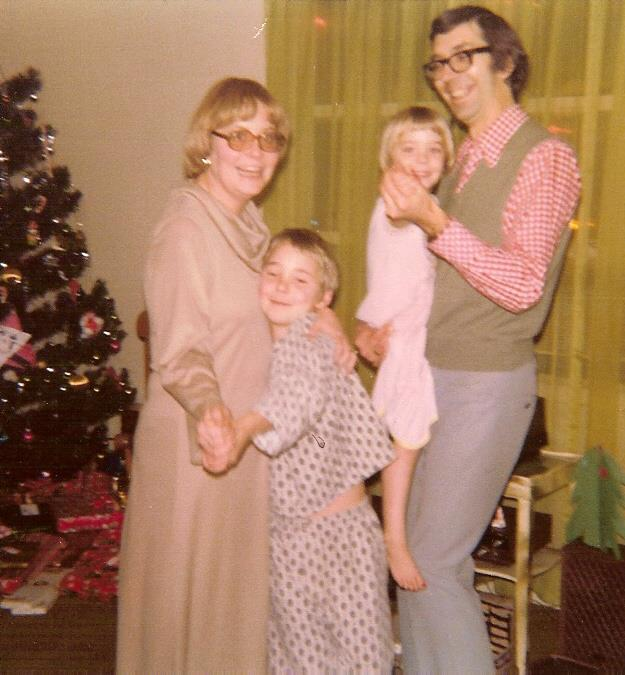 Jenny, her brother, Sean, and their parents, Dan and Louise, in 1977: “It’s my favourite photo of our happy family and evokes the picture of love that I was brought up with.”

My Mom struggled with depression her whole life. I knew that if it wouldn’t have broken anyone’s heart, she would have left this world on her own at some point. She stuck it out, though, and so to watch her leave by her own choosing was both a relief and immeasurably heartbreaking. In that moment, I didn’t feel like I was watching her kill herself, but if I’m honest, it became clear to me that there was a part of that experience that did resonate that way. I wanted to scream, “Please don’t leave me!” but I didn’t, because I knew she would’ve stayed if she could have and if things were different. She didn’t want to leave, but I knew that this was merciful, and loving her meant supporting her choice when it was time.

It was a peaceful death, surrounded by her loved ones. However, a few days before, I’d asked her doctor to prepare us for anything we might not be expecting during the process.  Unfortunately, he had overlooked a key detail. I held my breath as we watched her drift off to sleep and her breathing got heavier. We all expected that her breath would shortly fade away. Then it happened — a snort snore! I laughed, my sister-in-law laughed, my Dad chuckled, and my brother was silent. I instantly felt horrified that I’d laughed, and that my brother didn’t, and I wondered whether he would hate me forever because I did. It was the one moment in my life that wasn’t eased by laughter, and I was left feeling like that moment had been ruined. Thankfully, as we all talked about it afterwards, I learned that my brother doesn’t hate me — the only difference was that he managed to catch his own giggle before it came out.

As a teenager, I remember everyone commenting that my Grandfather’s death felt like a relief after his cancer became unbearable. I expected to have the same feeling after my Mom passed. I had seen her struggle and had wished for an end to her suffering, but I didn’t feel relieved. I felt guilt that I had wished for her to make the decision on when to die because it was agonizing to watch. I also felt selfish because I knew it was a thousand times harder for her than me.

Her agony hinged on not missing ‘the window’ of being clear of mind at the end, and wanting to have every moment possible while she could. (Under the federal assisted dying law, a person must have capacity at the time of their procedure). My Mom had pancreatic cancer, which is painful and horrible and requires heavy doses of medication to bear, but also causes a fuzzy brain. We just didn’t know when the drugs that were required to manage her pain would cause her to lose mental capacity.

I don’t know for how much longer she might have gone if she’d had the option of making an advance request for assisted dying. However, I do know that having that option absolutely could have taken the incomprehensible pressure off of her when she was making that decision. The additional burden of not knowing whether she would still have capacity made the decision that much harder, along with the pressure of trying to bring family together from far away and dealing with life moving on despite our plight. If Mom could have made an advance request, her losing capacity wouldn’t have meant the devastating loss of her right to an assisted death. She could have had more time to wind down and ease into the inevitable.

From here, the hardest part is the difficult task of reconciling the emotions that only this MAID experience involves. How to quiet the movie in my head of those last few weeks, days, moments and breaths. I feel like my path of grief is, on one hand, totally normal, and on the other hand, completely isolating. This way of dying isn’t one that enough of us have experienced or feel familiarity with. What I do know, though, is that sharing my story with others and helping to advance the understanding of MAID has brought me the most consolation in finding my way through this. Although I carry the heavy burden of this grief, as I share my journey, I am finding my own way to ‘just let go,’ and there is a sigh of relief.

Dying With Dignity Canada is moved and awed by Jenny’s courage. Thank you for sharing your story with all of us, Jenny!