Jane’s husband Bill was a man with a great sense of humour and a love for poetry and all music. In this blog post, his wife of 63 years shares the story of their love and Bill’s end-of-life journey. In August 2018, this seemingly healthy man fell, lost consciousness, had a concussion, then recovered (though not fully) after several weeks. Jane tells the story of Bill’s six days on life support and her agonizing decision to take him off of it, as well as the legacy of their love and life together.

Content warning: This blog contains graphic descriptions of a fall and medical treatment. 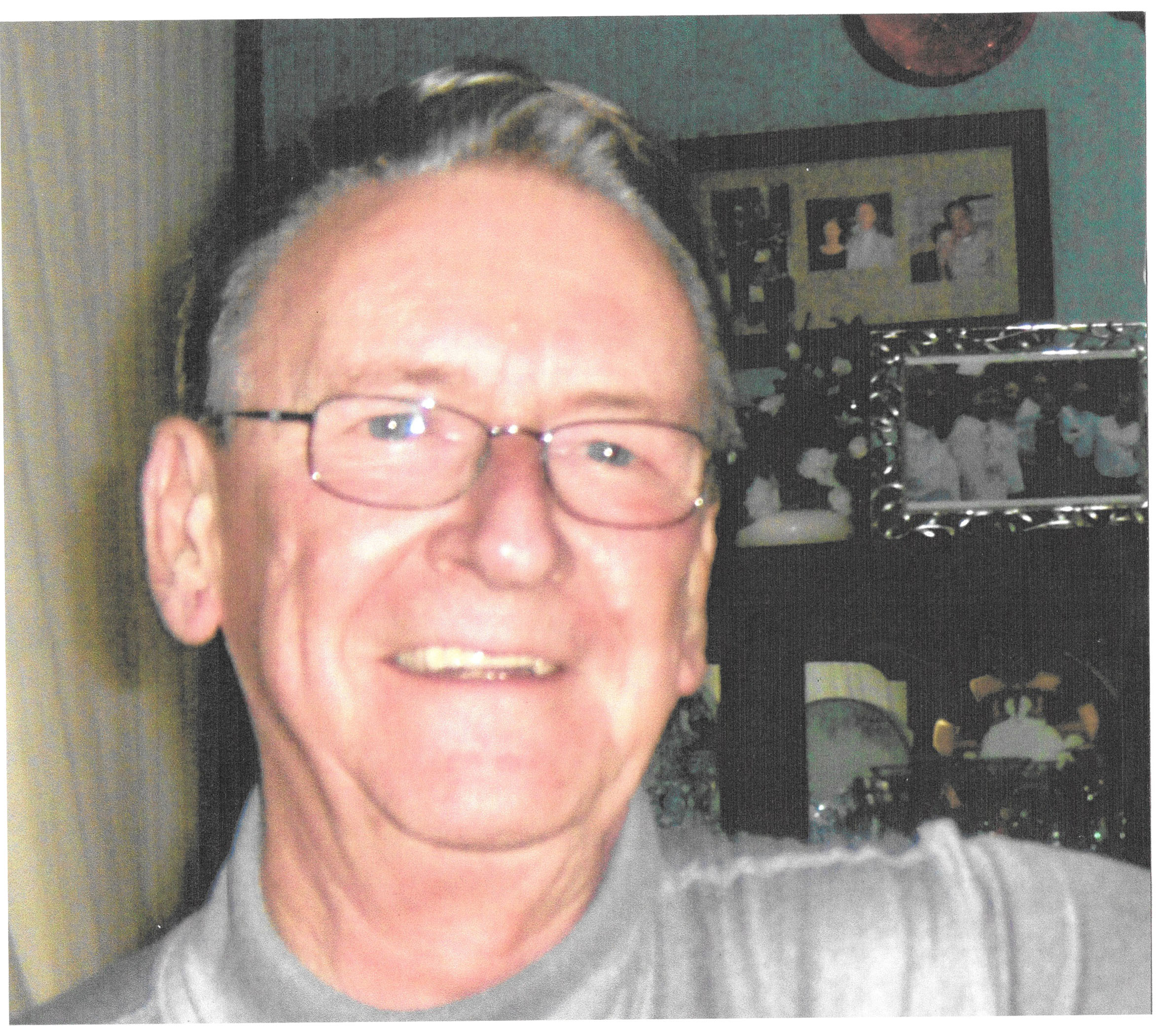 The reason I’ve submitted this extremely difficult, personal account is that I hope it may help others who are faced with this horrific dilemma when a beloved person in their life asks to be released from their final agony.

During the 1970’s my family and I witnessed my beloved Dad lying in a hospital bed, paralyzed and in pain for 2 ½ years after a tragic car accident at age 79. He begged us over and over to help him die! How we all wanted to release him from unending pain and the loss of any reason to keep living. But then, there was no option to access a medically assisted death. That’s why I became a member of Dying With Dignity Canada at its inception.

IN AUGUST 2018, after we came home from a lunch with friends, my husband of 63 years, Bill, went to the kitchen to retrieve something from a high shelf for me. As he reached up, I watched as his body suddenly fell backward and hit the ceramic tile floor with a crash. Blood poured from his head, and his eyes rolled back into his head. I was sure he was dead. Screaming and shaking, my impulse was to try CPR (which I have never been taught nor attempted before). About half a minute after I started, he opened his eyes, and said, “What happened?” Knowing what I do now, I believe his heart stopped on August 9th, 2018.

I dialed 911, told him to stay put, and rushed to get a towel to stem the rapidly-increasing bleeding. The ambulance came and wonderful paramedics attended to his wound, asked him questions to check his lucidity, and off we went to the Emergency Room, where he was given very good care and 10 stitches were applied to his deep head wound. He had a major concussion as well.

The doctor thought the cause of his sudden unconsciousness was the cutting off of blood to the brain in his carotid arteries because of his reaching up to the cupboard with his head tilted back. But when he saw his Cardiologist about 6 weeks later, he disagreed, and was sure the cause was a sudden drop in blood pressure. He was only in hospital about 2 days, and I had to call Telehealth several times over the next 3 weeks or so to have a doctor visit, because the pain in his hips and lower body was excruciating from the fall. He had to take heavy pain killer medication, which caused other problems.

The following month or more was dreadful for him — for both of us. He had to use a walker for several weeks, because of weakness and pain, and for the first week, ate nothing! I was able to get him to hydrate, at least. Pounds dropped off him visibly. He had 6 CT scans between August and November. The final one, done by a Neurosurgeon, showed the bleeding into the brain had finally stopped. We cheered that day! Looking back, I don’t think he ever really recovered from that fall; his legs pained him, he slowed down a lot, and went from being a very young-looking and active 82 year old to someone who did not seem well.

FORWARD TO JUNE 13th, 2019. That Thursday, he went to a yoga class at 3 p.m., came home and had dinner with me, and set off for choir practice at 7:10. He loved to go early, as our talented organist played show tunes and oldies, and was unable to play one for which Bill didn’t know all the words and music. But that night, he never arrived at choir practice. At 7:20, driving along a very busy Toronto street, his heart stopped and as he slumped over the wheel, the car veered over 4 lanes and smashed into another car. Fortunately, no one in the other car was hurt, but both vehicles were destroyed.

An off-duty paramedic happened to be nearby and pulled him from the car to perform CPR until the ambulance arrived. In Emergency his heart stopped twice more, and he was again “brought back” with paddles. When I arrived, I heard a nurse say, “the next of kin is here.” That’s when I knew it was not good news! He was on life support, something we had many times discussed and decided we NEVER wanted to be on it, either of us.

Bill was kept alive for 6 days on that respirator — I never heard him speak again. He was heavily sedated all that time, and barely opened his eyes more than a few times. When I first went in to him, I realized he didn’t know what had happened, so I told him he had been in a bad car accident and was being taken care of in Intensive Care and was being helped to breathe with a respirator. The oxygen in his blood was at 50% and needed to be 90% to come off the machine. After several days of this, my family and I had 2 meetings with the doctor, who kept telling us that within 24 – 48 hours, his oxygen count would rise to 90%. It never budged from 50%. I told the (very compassionate) doctor, head of Critical Care, that we had both talked about end of life and no life support, and he said he would immediately put a DNR order on his chart and above his bed, which he did.

On the 6th day, as I stood at his bedside, Bill opened his eyes, and looked directly into mine, and mouthed the words (as he couldn’t speak), “LET ME GO!” He said it three times. I said, “Bill, if they remove that tube from your throat, you will not be able to breathe.” He mouthed the words, “I don’t care”, and shook his head. I told him I would, with extreme sadness, respect his decision and would speak to the doctor. It would be done. 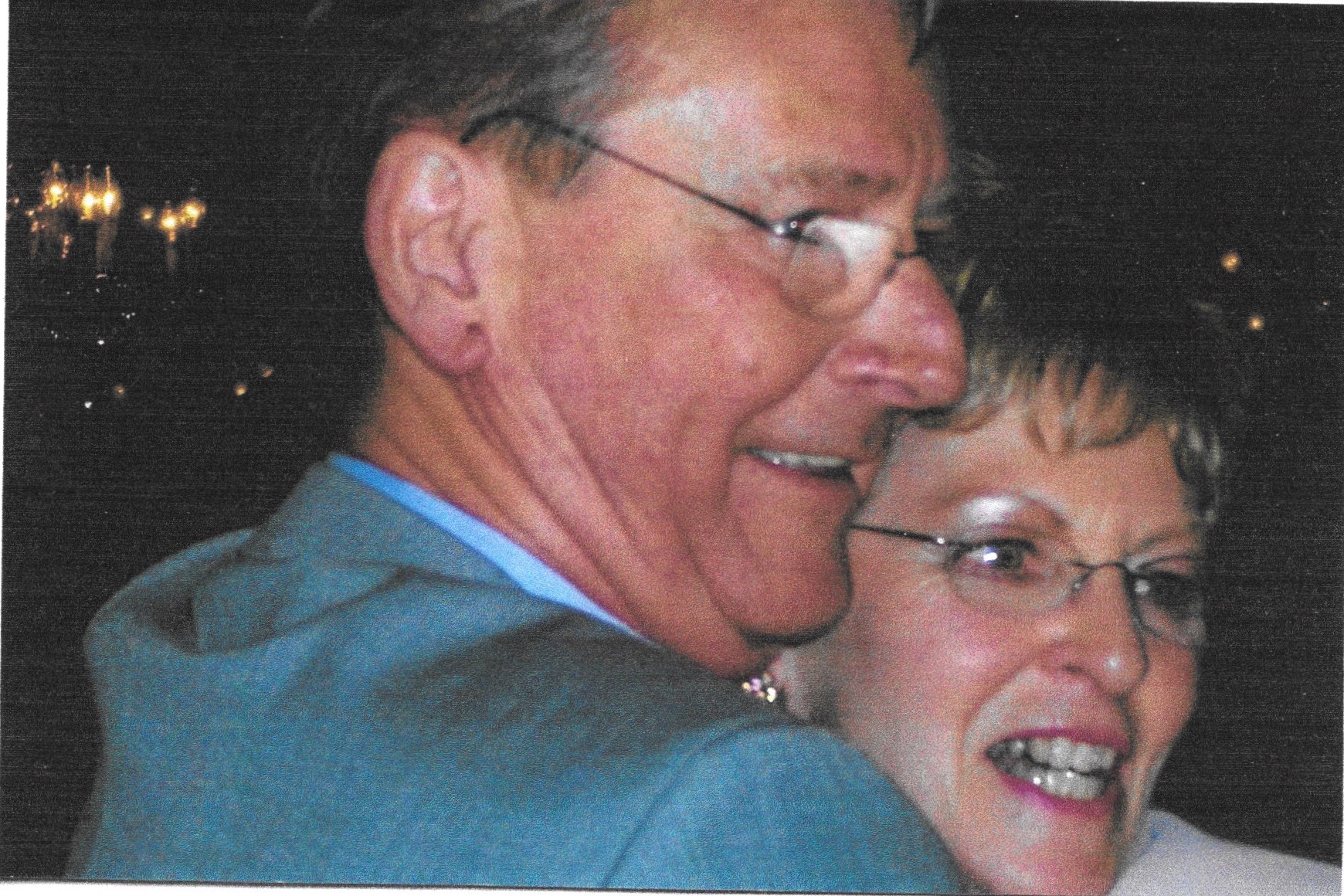 My family told me they would go along with whatever I decided, and on that dreadful day, I made the hardest decision I have ever made in my life. My niece told me it was probably the very best gift I had ever given to him, and I believe that, but what a cost!

On June 19th, our daughter sat on one side of the bed, and I sat on the other, holding his hands, and speaking softly to him, until his heart stopped beating. He lost consciousness almost immediately and was gone from us in an hour. Bill was compassionately taken off life support and injected with a drug so he could die peacefully. I absolutely know it was the right decision, and thank God he was able to make that decision and ask for it himself. He knew I was the only one who could authorize it, and I think he was desperate during those 6 days of sedation to become conscious enough to ask me. In retrospect, I wish that off-duty paramedic had not been nearby that night, so he wouldn’t have had to go through those 6 days of torture.

We met in our high school choir, fell madly in love, and married very young. Bill had a terrific wit and sense of humour. He loved poetry, and, as fate would have it, his bookmark at the time of his death was in a book of poems by Robert Service, The Cremation of Sam McGee. He would have loved that irony. His favourite poems were “Invictus” by William Ernest Henley (which you can read below this blog post), “How do I Love Thee” by Elizabeth Barrett Browning, and “The Listeners” by Walter de la Mare. He knew these poems by memory and loved reciting them. His sense of humour was at the fore when he recited the 108 lines of “The Walrus and the Carpenter” from Alice In Wonderland — memorized in our high school English class. He also loved music, and knew the works of Gilbert and Sullivan and notable jazz musicians by heart. Bill also loved sacred music, especially the works of Handel, including “The Messiah.” He sang bass in our church choir and astounded our organist with his dedication and musical knowledge.

He lived for summers in our garden, with his beloved fishpond, lots of barbeques and family and friends, and time in our favourite parts of the planet, Muskoka and Prince Edward Island. He loved and was very proud of our family — our son who passed way in 2010, and our daughter, granddaughter, and her husband, and two great-grandsons, ages 6 and 9, and a very close niece. He was adored by our many nieces and nephews and family was a great source of happiness as he was an only child, and was immediately embraced by my family when we married. 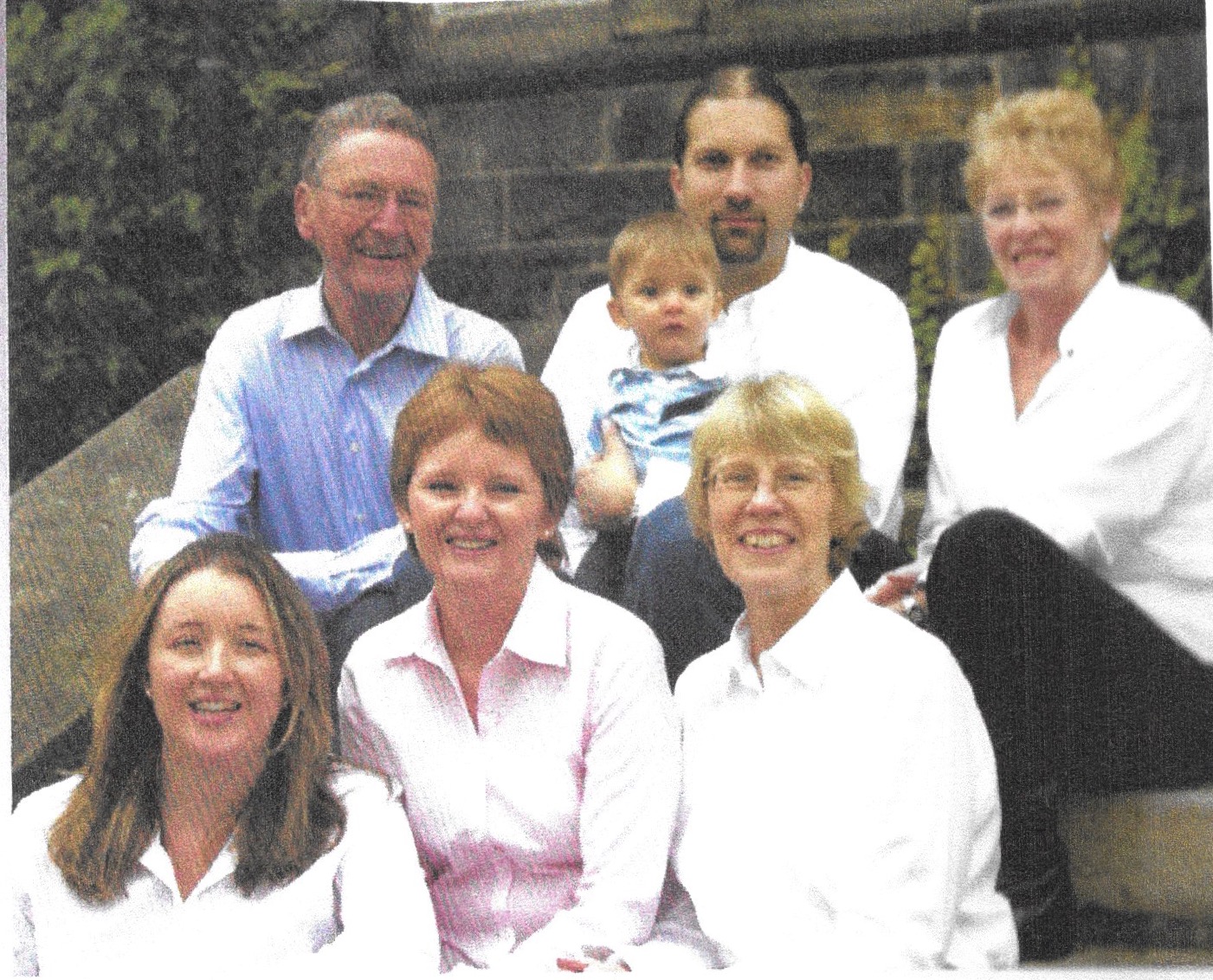 He made many friends throughout his 37 year career at Bell Canada and 8 years at Nortel. He had the admiration and respect of everyone who knew him as a kind, gentle, loving man. His very favourite saying was, “Try to carry on as if you know what you’re doing!”

We were so fortunate that we knew we had each found the “love of our life.” All our friends and family knew that — we were always “Bill and Jane” or “Jane and Bill” — and so now, alone, I’m floundering and heartbroken. I found the last Valentine card he gave me in which he said, “I cannot imagine having spent my life with anyone else. You are my strength.”

I know it was exactly the opposite — he was mine, and so much more. 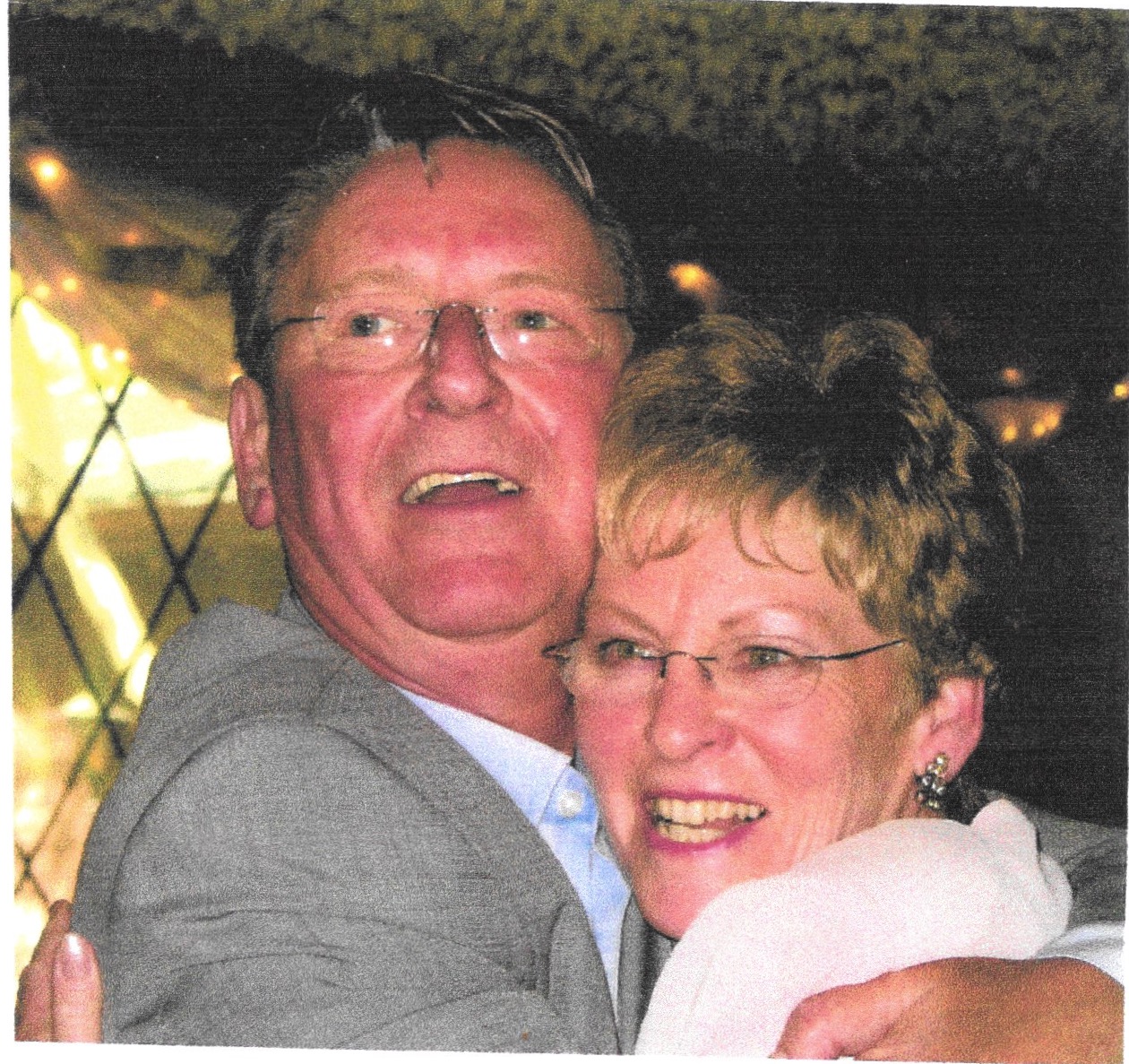 Bill and Jane at their 50th wedding anniversary party in 2006

Out of the night that covers me,
Black as the pit from pole to pole,
I thank whatever gods may be
For my unconquerable soul.

In the fell clutch of circumstance
I have not winced nor cried aloud.
Under the bludgeonings of chance
My head is bloody, but unbowed.

Beyond this place of wrath and tears
Looms but the Horror of the shade,
And yet the menace of the years
Finds and shall find me unafraid.

It matters not how strait the gate,
How charged with punishments the scroll,
I am the master of my fate,
I am the captain of my soul.