Frances’ story: My reflection on my mom’s assisted death

Frances’ mother lived a full life, moving from a small town in Quebec to Alberta after her marriage. She was dedicated to her family and loved her grandchildren dearly. After leukemia and other ongoing health issues, she decided to access MAID in 2019. In this blog, Frances shares her thoughts on the process – what she wished had gone differently, and what was powerful and freeing about her mother’s decision.

My mom had heard about medical assistance in dying (MAID), and we’d talked about it. It was always something we thought was an excellent option for those who are suffering. My mom had been having health issues for the past 8 years, with her condition fluctuating. She’d had leukemia for about 25 years, and a drug she was taking for it had a side effect of prolonged usage: skin ulcers on her feet. She kept getting these ulcers, and even though doctors took her off the drug, they take a long time to clear. These ulcers were sitting on nerves and she was in constant, excruciating pain. She would repeatedly say, “This is not a life. Once this clears up, it’s going to be something else.” You could tell that she was getting fed up. She was saying, “This isn’t quality. What have I done to God that he won’t come and get me?”

My mother lived for her kids and grandkids; she had so much love for us and did whatever she could for all of us as a family. She grew up in rural Quebec, in a small town called Bouchette, in a family of 21 kids. The morning of her wedding, she had to milk the family’s 13 cows before she could go to the ceremony at 9:30 am; she was an hour late to marry my dad. They were on a train heading west at 2:30 pm that afternoon. They settled in Calgary and have been here ever since. When I was growing up, she ran day homes and was always with kids. When her grandchildren came along, she said, “I’ll take care of them.” People have complimented us on our kids when they were young, how well-behaved they were, and I credit my mom and dad for that.

The moment when we knew it was time to think about MAID was when we were at a doctor’s appointment and she suddenly threw up a couple of times. Then, afterwards, she looked at me and said, “You’re like a ghost. I see right through you.” The doctors did several tests and nothing came back, but she said, “I’m done. I’m not doing this anymore.”

Then, several days later, my dad called me at 5 am in the morning and said, “Mom’s had a stroke and she’s lost the use of her left arm.” When I got to their place she said, “I am done. I am so done.”

I didn’t know where to start, and so I talked to the nursing staff at the assisted living facility where my mom and dad were living. The nurse said, “We can put her into palliative care, which is what we’re going to do, and keep her out of pain.” I went to my doctor and asked for help, but he said that my mother was good, that all of her issues were treatable. But I said, “No, she didn’t want to do any more treatments.” He said he understood and got us the MAID application paperwork. That was the Friday morning, and on the Sunday, after reading it with my mom and dad and with both understanding the process, my mom said she wanted to go forward with it. I had some friends of mine come in and they witnessed the request, so then I reached out to the MAID program. From there, the people I worked with, they were phenomenal. They understood and they were so supportive. We saw the first doctor, and he said that my mom did meet the criteria. Then, as the doctor was leaving, I asked him what came next. He looked back at me and said, “Oh, I don’t know. I’m just a hired gun.” I thought, that’s not right, and it didn’t sit well with me.

There needed to be a second doctor, and we found one who ended up being the doctor who administered the process for my mom. He assessed her and said, “Yes, we can do this.” It was the first time in about 8 years I had seen that kind of smile on my mom’s face. Her eyes lit up — “finally, I’m in control.” We scheduled the procedure and had a chance to call in family from out of town, and many people got to spend time with my mom in her last days, on her own terms.

Our family doctor was very supportive and even asked if he could visit her. My mom had a funny sense of humour, so when he walked in, she said, “Never in my dying days did I think my doctor would come and visit me at my house!” He laughed and said, “Your mom’s one of a kind.” 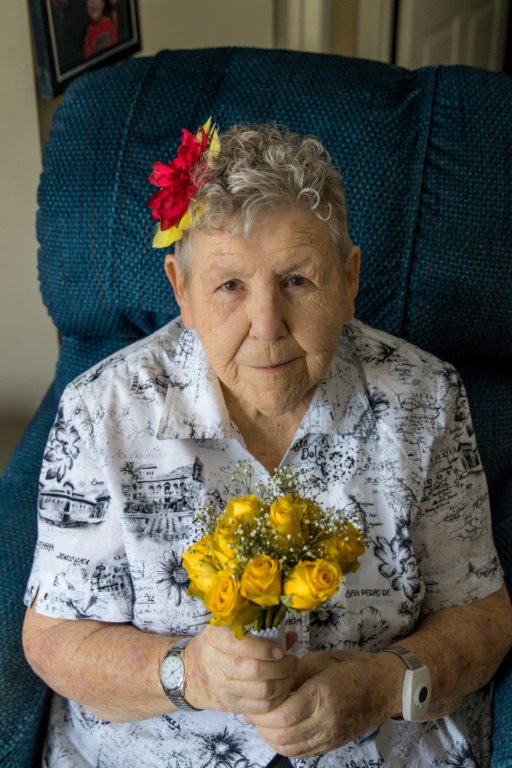 The whole family was present the day of, and she got to spend time with all her grandchildren at once. It was just such a positive process. The doctor called me at 5 pm and said he was stuck in traffic. My mother was impatient; and grumbled that the doctor knew where he needed to be, and why had he not left early to avoid traffic. She was in a rush to go! Finally, he arrived, and she signed the papers. The procedure took a bit, because my mother’s veins were so small. But then she was gone, and she looked so peaceful. Everybody got to say goodbye, and she got to go on her terms, which is what she was afraid she’d lose. It was what she wanted, and I’m so thankful that we were able to do that for her. In the background played some of her favourite songs, like “Tiny Bubbles” by Don Ho and a Quebecois folk song, “Ah, si mon moine voulait danser!”, that her and my dad used to dance to when they were dating.

My mom and dad were 10 days short of their 65th wedding anniversary when my mom passed. My dad didn’t want her to do it originally; he said, “We made a commitment to grow old and die together.” She said to him, “You have a strong heart and you have another 10 years. Me, all I’m doing is suffering.” It’s been tough for him. 65 years of looking across the room at her, and now this empty chair. He says he misses her like crazy, but he’s relieved she’s not suffering anymore. We had her cremated and were going to bury the urn, but he decided otherwise and said, “No, I’m going to keep her on the dresser and you can bury us together.”

Though I’m so happy with my mom’s choice, there are things that I feel could be improved on. After she had passed, we were talking with the doctor, and he told us he’d spoken to 27 nurses asking for their help. Doctors shouldn’t have to beg people to assist them! Also, my mom was on morphine and it didn’t seem to be working anymore, and I had to reach out to the non-emergency paramedics to get something else that would help her. They put her on fentanyl, which gave her the comfort and pain relief she needed. But then the nurse practitioner took her off the morphine because they didn’t want her blood pressure to tank. I get it from the process point on their end, but they didn’t listen to what we were saying about my mom’s specific situation. She was waiting to die and they were worried about her blood pressure tanking?

I also wish the stigma around MAID wasn’t so negative. I wrote her obituary and originally had included a thank you to the MAID program for allowing my mom to access this option. I shared it with the family, and they asked me to take it out. They didn’t want the backlash from people saying that it’s wrong. The people I told, though, many didn’t know it was available. Most of them have been very positive but, for example, my mom wanted a church service, but I couldn’t tell the priest, otherwise we wouldn’t have been allowed the service in the church. So I made the decision not to tell anyone until after the service, because I didn’t want to have to deal with that.

People will say, “How could you do that?”

What do you mean, “How could I do that?”

To me, dying with dignity — those words — are the epitome of what it should be for the life of a person, what we should be aiming for. It should not be a negative thing. I love the fact that the name is correct; it’s not assisted suicide. We’ve experienced suicide in our family, so to have it changed to medical assistance in dying is so important. I wish we could put even more in there — dignity — put it on a board that’s a thousand feet high. DIGNITY.

The trauma of losing my brother suddenly several years ago, compared to what we went through with my mom, it was completely different. People have asked me how I’m doing, and my response is always, “I’m good.” I think it’s because everyone got to say goodbye. Everyone she wanted to see, she did. For her to sit there on her last day, laughing, it was so beautiful. She said, “Never did I think that I’d be sitting here, talking to my grandkids, right before I die.” It was what she wanted. To me, if I can help spread the word and spread the positive experience, I want to be able to help others understand, YES – there are options.