Emily’s story: My mother accessed MAID with me by her side

Home / Personal Stories / Emily’s story: My mother accessed MAID with me by her side

Emily’s mother Margaret was determined to access her end-of-life choice when she felt her suffering became too much to bear. When that time came, Emily accompanied her mother on her medical assistance in dying (MAID) journey. This blog post is her reflection on the process, the bravery of the healthcare providers that took part, and what it meant to their family to have those final moments to say goodbye.

Mom had wanted medical assistance in dying (MAID) as soon as she learned it was legal. She filled out the paperwork and was assessed by two doctors who approved her for the procedure. It only remained for her to determine when she felt too much pain and suffering to go on with daily living. Mom was always of the opinion that what we do for our pets when they’re in pain we should do for our loved ones. I agreed, having witnessed my dad’s long challenges with his declining health before his passing. 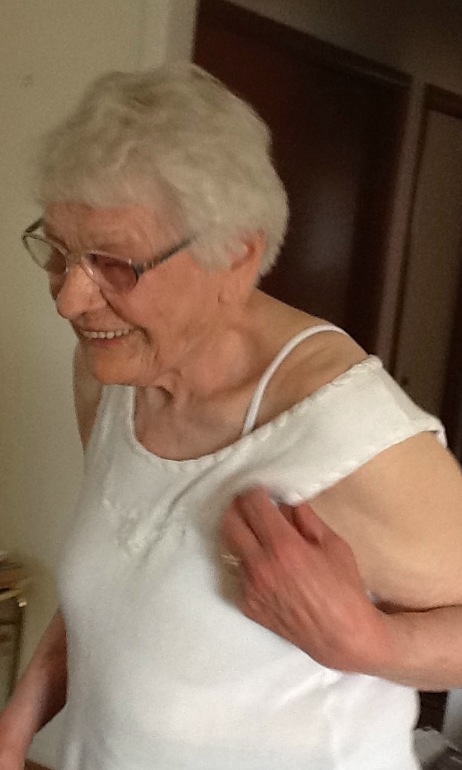 I spent from October to March 2016 in Powell River, British Columbia, looking after my elderly mother. I cooked and shopped for food and some bakery treats like cinnamon buns and pastries. I took my mother to bazaars at the Complex and outings to the beach, the lookout memorial where we had a family plaque installed, and other car trips. I would go to the library to read New Yorker magazines, swim at the local pool, and enjoyed walking the Willingdon Beach Trail by myself or sometimes with a friend. I thought I could stay five months, but other events intervened — including a husband’s ill health, my then-two-year-old granddaughter Lenora’s care, as well as packing up my Toronto household to move back home to Nova Scotia.

I began a new phase of caretaking after my move out east. More cooking, cleaning, taking Lenora to pre-school for a few hours twice a week, and long walks with my daughter’s poodle, the demanding Stella. Mom was in pretty good health and cheer the rest of the year, and much to my surprise, she rejected offers of a home support team to take over the duties I had performed for her. A newly resurrected independent woman emerged, whose only support involved help with shopping, bath aid, and an incredible cleaning lady. Due to a lack of childcare in Nova Scotia, I felt a bit guilty that I had no recourse but to allow mom to continue her independent lifestyle but thought that I had done my part in getting her back on her feet again.

It was mid-January when I heard from the head nurse that mom was in decline and was showing signs of confusion and odd behaviour, such as forgetting to take some of her medications. I found this alarming, but Mom had outlived her prognosis by a year and a half already, and I thought that perhaps she would rally again. Then, in the third week of January, I received a call from mom’s shopping helper, Karen, that mom was going by ambulance to the hospital, reporting weakness in her left arm and leg. At this point, my daughter and I knew I had to travel to BC.

The time where she felt ready to access MAID had arrived for her in the hospital rather quickly. She could no longer walk and medication did nothing for escalating pain. I arrived at my mom’s home on Sunday January 28th, and after a 2-hour visit Mom requested I send for her doctor, Dr. Reggler. The head nurse, Zenny, was summoned too and she was aware of mom’s plans, and said, “We’re following her wishes. It’s the law now.” Zenny took charge of the details from that point.

Mom arrived home from the hospital the following afternoon, Monday, January 29th, at 2:00 pm. Karen brought a commode and bed rail from Red Cross and mom was able to access both rails and pull herself out of bed with just a little help from me in support. Her body could sustain function until Dr. Reggler and nurse Nova arrived at 11:45 am on Wednesday to reassess her agreement to proceed. Mom could have changed her mind at several points during this time but remained determined, never wavering.

Dr. Reggler was very kind-hearted and thorough in explaining how the procedure works. He first asked that we shut down our cell phones, citing a time during one bedside visit when he forgot and was forced to admit he was a Led Zeppelin fan when his cell activated a rendition of “Stairway to Heaven.” We had a little chuckle at the appropriateness of the song.

Mom had a number of precious moments provided her the night before MAID was provided. I had set up a sort of showcase of photos of our family on another long bureau, along with two vases of flowers. I wanted Mom’s passing to be as beautiful as she was. My caring and nature-loving mother was now leaving behind her indelible imprint in my son’s family, my daughter’s family, and inside my spirit. I was staunchly fortified in knowing we are eternal spirits that live on when our bodies must be left behind.

Mom’s friend Bev called and I was able to pass along her best wishes and prayers. My son, who lives in Saint John’s, New Brunswick, called to have a chat along with his three kids. Mom later said she was so pleased to tell Edward how every day she checked Facebook to see what he and the grandkids were doing. She especially enjoyed photos of her grandson Ian winning trophies at hockey tournaments. Mom was an avid hockey fan herself, often having to leave hockey broadcasts of her Canucks because she got too excited and her heart raced. She loved the recent photo of Edward’s daughter Claire falling asleep for the night in a linen closet with the cat curled beside her. Her granddaughter Haley said she was just finishing the last of her 14th birthday cake. Haley has the special grandbaby place of being the first to arrive. The rest of you grandparents reading will recall just how special that arrival is!

She then listened to a video of Louisa singing “Farewell but not Goodbye.” This was the same song she reminded me that she had sung to my dad, her grandfather, while he was in Extended Care. Louisa took a week to visit him when Mom had her mastectomy, and together we took over feeding him while mom recovered. Now she sang this beautiful Celtic lament to her dearly loved grandmother on the night before her “leave-taking for another adventure,” as Louisa called it. I had my iPad on a dresser along with the gorgeous photo of a very pregnant Louisa at a baby shower that Mom’s friend Bev had printed from her computer. 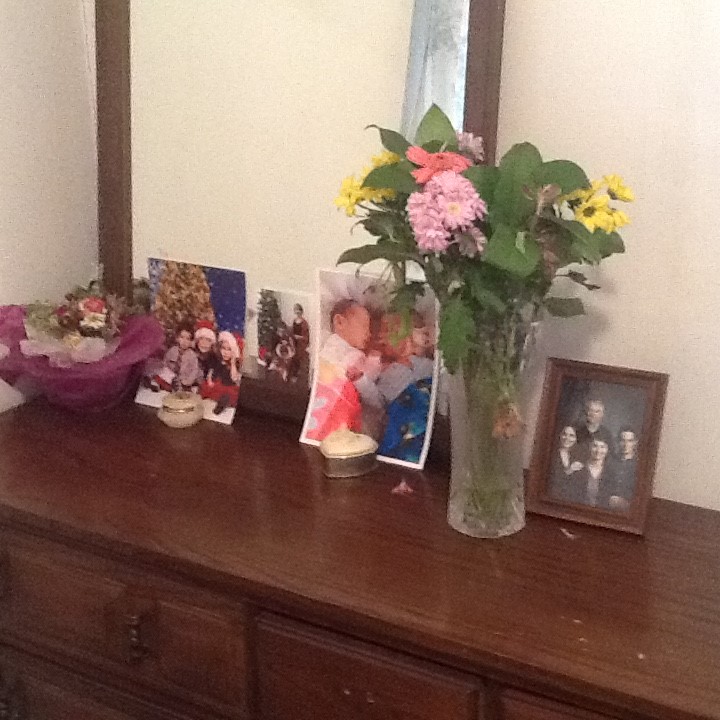 The dresser Emily prepared for her mother because she accessed MAID

I wanted to share something of our spirit with the devoted doctor and nurse team who had shared such intimate moments here in our home. I wanted them to feel they knew a little more in depth the family bond and the sense of communion and closeness this event had forged so quickly, transfiguring what might have seemed sadness with reminiscence and song. When asked if I could play it, they listened and thanked me for sharing with them.

The day of the procedure, Dr. Reggler explained how the four drugs successively shut down the body and lead to a peaceful passing. I thanked first the Nurse, Nova, and I hugged her, saying, “You’re very courageous to assist in this work.” I said, “It seems we are sort of like pioneers in this way of doing things.” I hugged Dr. Reggler, too, thanking him for his courage. I said, “I will be an advocate for this should the need arrive for me. He warmly hugged both my friend Sheri and I, and said, “Indeed you are the pioneers, and if we don’t have people like you and your mother, brave enough to follow through on your convictions, the program’s work is worthless.” He said that he too, would want this opportunity provided for himself should the need arrive. He felt that if he didn’t provide the service now he would be rather hypocritical in wanting it for himself.

I had read in the newspaper that the program was lagging behind in other provinces, with a lack of participating doctors. Dr. Reggler said yes, British Columbia was rather ahead and that 4 percent of all deaths in the Comox Valley were medically assisted. Here in Powell River, they had performed 12. He said, “Vancouver Island has a particular varied personality who are more adventurous. Your mother is another distinctive individual who knew what she wanted and persisted in asking until she got it because she wouldn’t settle for anything less.”

A friend, Sheri, stayed with me the entire time during the procedure and for several hours afterwards. We ate lunch together and debriefed on the extraordinary event we had just l witnessed.

After Sheri left, I called Stubberfield Funeral Home to ask what was the latest they could pick my mom up. I wanted to spend some time with her alone to feel the last of her spirit leaving and to bid her a proper goodbye. I was at peace knowing that this tranquil leave was exactly what she had wanted it to be. I went in the room to sit with mom.

My Mom had preferred to remain in the hospital gown she had been discharged in because her arm hurt so badly. Holding onto the bed rail and the commode rail had aggravated her pain. I didn’t want to send her off into the dark night in a hospital gown, so I dressed her in a pretty blue blouse and pants and exchanged her hospital blue walking knee highs for a dress sock and her comfy shoes. I knew it was usual to bring clothing later for the staff to prepare her body, but it comforted me to dress her one last time on Margaret’s journey up the “Stairway to Heaven.”

I laid down on the bed with my mother and felt her hands under the blanket. I was surprised to find her hands were still warm. I rested one hand in hers and for one last time and was comforted by the warmth of a mother’s eternal love for her child and her world.