In January, Ottawa’s Don Kent was diagnosed with terminal cancer. Suddenly faced with his own mortality at 56 years old, Don plans to pursue medical assistance in dying. In this very special blog series, he invites Dying With Dignity Canada supporters to follow along with him on his journey with cancer and his quest for a peaceful death.

This is part one of Don’s Journey.

Do you recall the sitcom “Cheers”? There was a recurring theme in which the entire bar greeted one of the patrons with a resounding “Norm!” every time he entered the bar. I feel that way here at The Ottawa Hospital (TOH). The staff at the surgical day care unit are starting to recognize me, and although they’re caring and friendly, this is not your neighbourhood bar.

I awoke at 12:30 this morning and by 2 a.m. I was suffering from the chills. After receiving my pain meds, which includes Tylenol, I again awoke at 4 a.m. But this time, I was in a sweat as my fever broke. They have isolated my bed within the observation ward until the swab that the nurse took has been cultured to determine if I have the flu. Ain’t life grand?

Last night started off promising. During the afternoon rounds, I negotiated with the doctors and they are allowing me to have a couple drinks of gin each evening. I like my doctors, and with a daily gin ration, I may never want to leave here!

My ear, nose and throat (ENT) surgical team is wonderful. It starts at the top: my primary doctor is a very caring and compassionate man, and thankfully, a skilled surgeon. It then flows right through his team from his residents to his administrative assistant who all seem to share his compassion for their patients. I am blessed to have landed at their office a few years ago.

But first, let me backtrack a bit to describe the early years of my cancer journey so that you understand how I arrived where I am today. 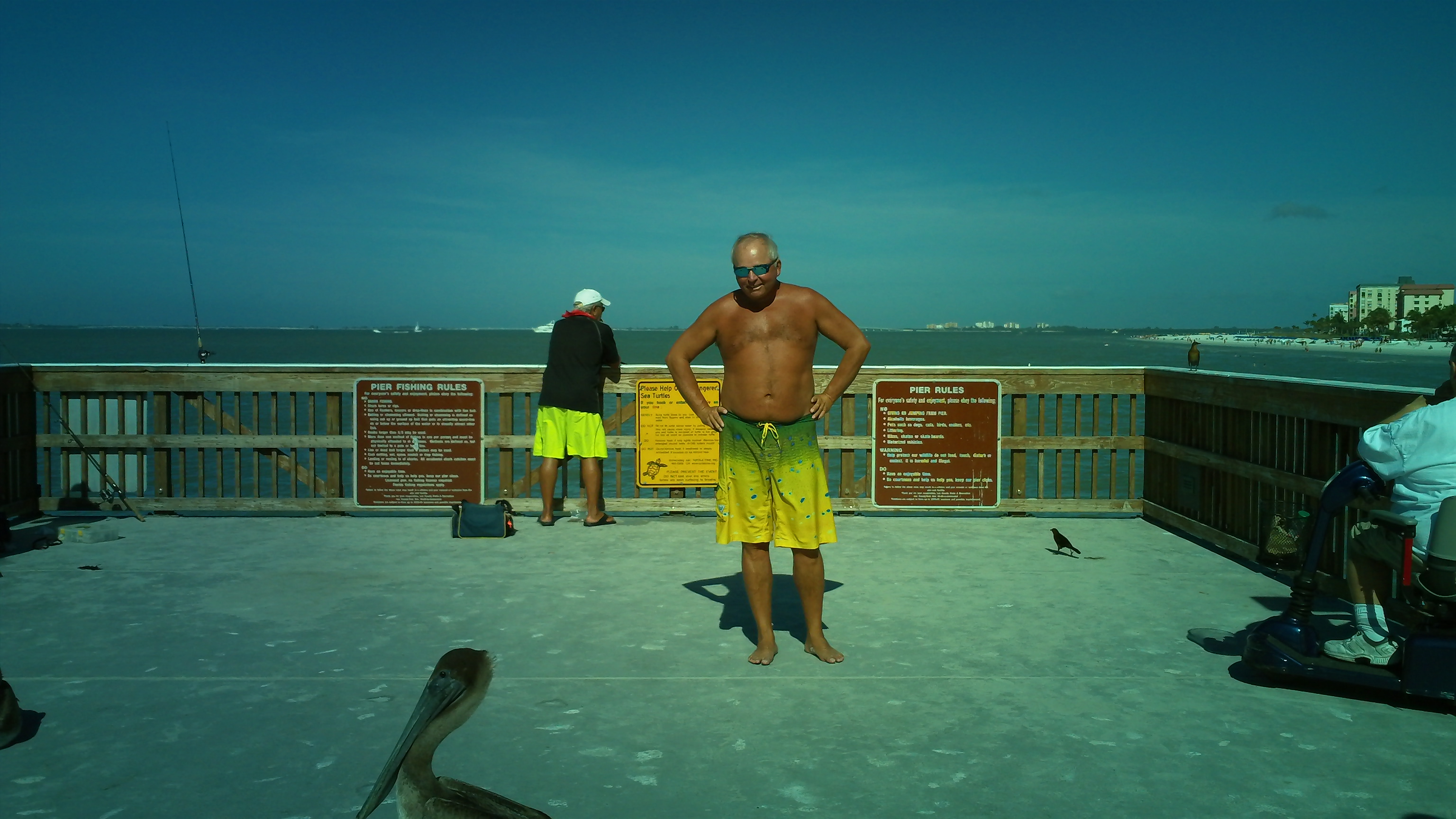 Don and his wife, Barb, typically spend six months of the year in Florida. Here he is in the company of some pelicans on the Naples pier.

My original diagnosis of squamous cell cancer with the primary in the left tonsil was in 2007. I underwent 35 radiation treatments and two rounds of chemotherapy followed by a left neck dissection. All was good until about 2014 when I developed osteoradionecrosis (ORN) in the left mandible. Two summers of hyperbaric oxygen therapy and a debridement followed with no significant improvement. It was then decided that I would have mandible reconstruction using a fibular free flap once the mandible fractured or the pain became intolerable. In the autumn of 2016, I developed a persistent sore throat, which by March 2017 had deteriorated significantly. I was having difficulty breathing, was aspirating food and drink, and sleep was constantly interrupted.

I made an appointment with my ENT as soon as I returned to Canada from my winter in Florida. These issues were thought to be chronic effects from the radiation although a couple of CT scans hinted at the presence of a tumour. I had a tracheotomy and a G-tube installed in July. By this point I had lost about 40 pounds (yay!) as I could barely swallow and my speech was compromised. An endoscopy was attempted to try to determine the definitive cause, but they were unable to penetrate my larynx. My surgeon had indicated that my throat would only accommodate one more surgery so we planned on the mandible reconstruction as well as a laryngectomy. My ENT was reluctant to perform these surgeries together as they would be very complex and high risk due to the hostile nature of my throat. But, this would provide the best chance of resuming a more fulfilling life. He had me consult with a second ENT surgeon and together they decided to proceed. It should also be noted that, by this point, my social life was reduced to near nothing (and I’m a very social animal). These surgeries could restore my breathing, improve my speech, and allow me to eat and drink orally again. I considered the risks acceptable. 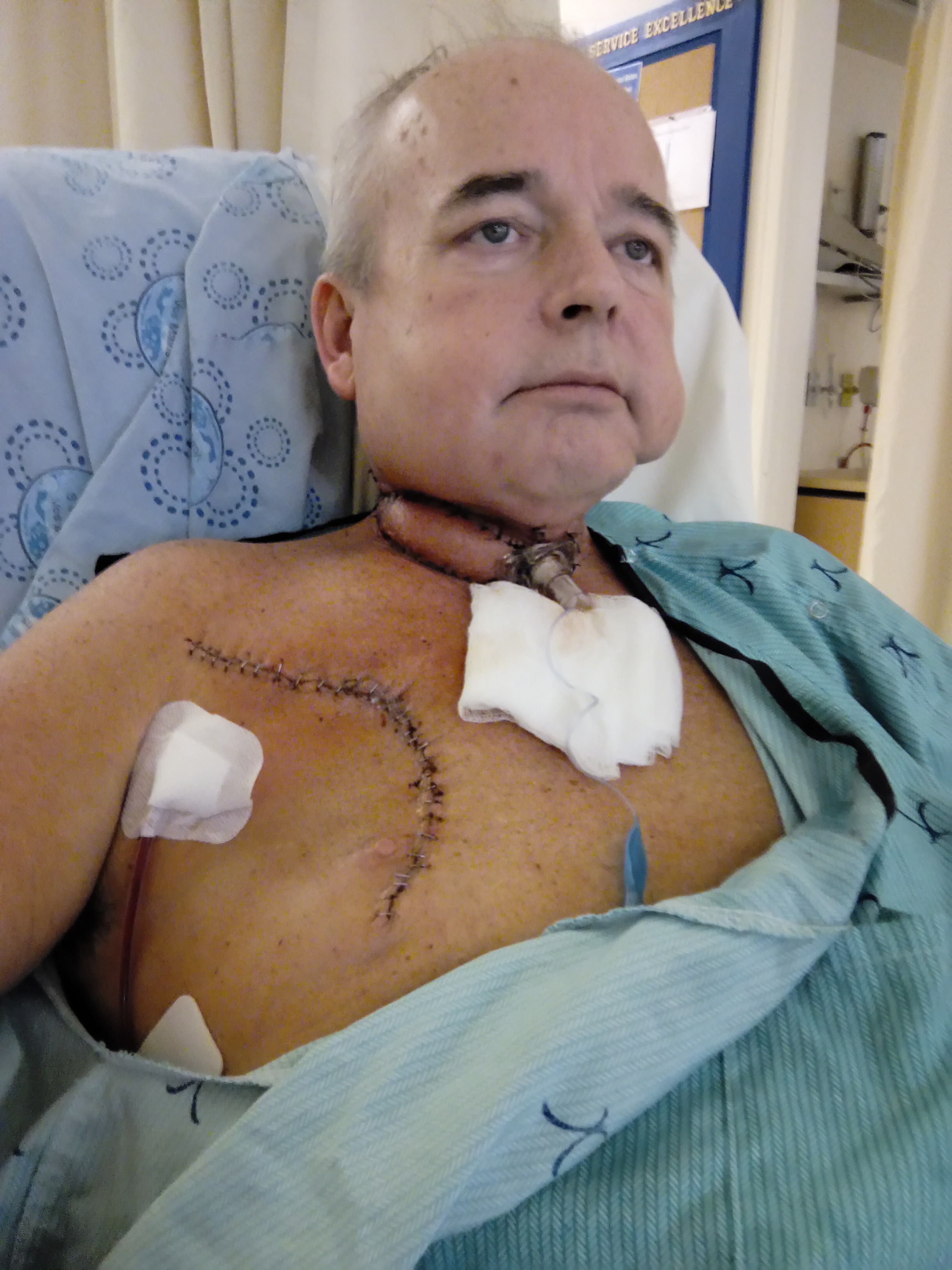 This photo from February 1, 2018 shows — in Don’s words — “the fine surgical work of my ENT.” Although it may look uncomfortable, Don felt very little pain.

A team of three surgeons attempted these surgeries this past Monday for a planned 10- to 14-hour surgery; however, when they opened my throat, they located the long elusive tumour. It was malignant and inoperable as it extended from my voice box to my spine. This eventuality had been discussed, and following a pectoral flap to close the wound, they concluded the surgery. There are no curative treatment options so this will be terminal. Statistically the survival duration is six to 12 months. I am 56 years old, so still relatively young, which means I could beat the stats by a fair bit, but I want to prepare for the eventuality where my health has deteriorated significantly.

That pretty much brings me to where we are today. I intend to pursue medical assistance in dying (MAID) before the symptoms become overwhelming. I have initiated these queries and have had several conversations with the palliative care team at TOH.

I have been following Dying With Dignity Canada for the last several years as they have been advocating for MAID for decades. They have been interveners and have worked with litigants in several challenges in the courts to get MAID legalized in Canada. That legislation was finally passed in 2016 — success at last.

It was one of Justin Trudeau’s major campaign platforms in the last federal election so I actually broke down and voted Liberal for the first time in my adult life. Little did I know at the time how soon I would be trying to avail myself of those very services. Timing is everything sometimes.

Read more about Don’s journey in Part 2 of his blog series.