Home / Personal Stories / Cody’s story: A lifetime of struggling with mental illness and addictions, and a fight to access MAID

Cody, an Alberta man in his late 30s, has been living with treatment-resistant depression and anxiety, as well as addiction. Facing continued suffering, his wish is to access medical assistance in dying (MAID). However, Cody is not currently eligible and is facing ongoing pain and struggles with his conditions. In this powerful piece, he reflects on his experiences and how he’s left feeling trapped by Canada’s current assisted dying laws.

It’s strange to be in my late 30’s and still, when I look in the mirror, not know or recognize the person in the reflection. There were times in my life when I felt like I was falling slowly and times where I plummeted at record speed towards this place everyone says you’ll eventually hit. But the further and faster I fell, the more I realized that this so-called “rock bottom” that a person needs to hit to seek change or help in life is a complete myth. When you realize that you’ve gone past a few slip ups and life begins to unravel, you figure out that you are in an unprepared free fall. But, for me the fall turned from months, to years, then decades. At some point in my life I realized that what appeared to be rock bottom was just a slippery ledge, which was very small and would hold just long enough to shake myself out of a fog. For me, what I thought was my rock bottom was just wishful thinking and a simple distraction from the realization that I had absolutely zero control in and of my life.

When I explain this to people (or even to myself on some days) I think, what do your conditions have to do with looking in the mirror? I look at my life and my very intense battle with treatment-resistant depression and anxiety and a severe addiction. Through the many years, each time I looked in the mirror, the less and less I recognized the person looking back. My illnesses and addiction turned me into an empty shell of a human. The hope, grind, control, and feelings were gone.

I was forced to acknowledge the fact that my life was being controlled by my mental illnesses and addictions. When mental illnesses don’t get put in the same category as other severe terminal illnesses, it is even harder to understand and deal with what I and so many others live through each day. How do you go about asking for help or fixing the problems I am being completely controlled by when, in reality, I and many very well-educated people have no clear-cut definition or can give me a simple reason why I am the way I am.

When I was first diagnosed with treatment-resistant depression and anxiety, I was in my early teens. Now, I am in my late 30’s and am a bit more knowledgeable about my ailments, but I still don’t know why or how I have gotten to this point in my life. There is no x-ray or test that can show why my life is hell, why my body is shutting down and damaged to a point where my future is nonexistent. It’s very frustrating that I have done irreversible damage that will prevent me from living a normal life. How can someone be tasked with living with or fix something unless you understand what you are dealing with? 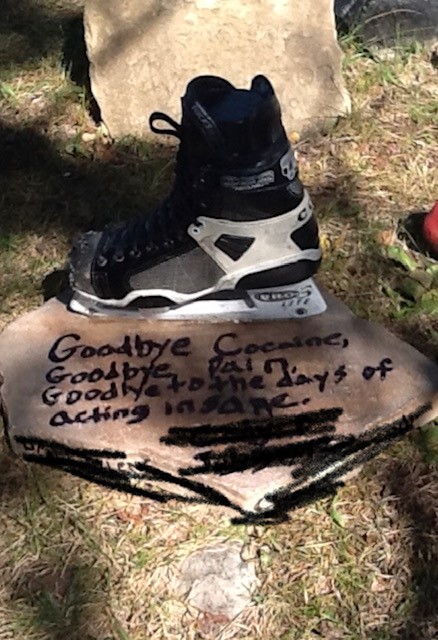 In 2012, one of the many treatment centres Cody has tried, they held a ceremony to attempt to “bury his addiction.” He would return to rehab many times following.

I, like anyone else who has suffered from a debilitating illness and addiction, can only try to find the path that is right for me. There comes a time when the fight has gone on to the point of total exhaustion, and after the over twenty years of battle it should be my own moral and ethical choice to escape my unbearable suffering by the way of medical assistance in dying (MAID). The struggle with the current laws is putting MAID assessors and practitioners in a situation where they have to deny suffering people the right to manage their own end-of-life choices.

The people that work for the provincial MAID program had to say that they couldn’t help me due to the current legislation. They told me to go back to my doctor for the time being to manage my symptoms as best as possible. However, on top of the COVID pandemic, we are also fighting a war with opioids. Going back to my doctor and trying to figure out some combination of medication that might make a small difference — there was legally nothing she could do. The medication I needed just to get through each day had to be approved by the College of doctors and adding more so I could have a couple hours a week where I could possibly get the slightest relief from myself would have raised flags. She wasn’t able to prescribe the medications and explain to the College why it was necessary.

So, here I am, left struggling to get through each day to understand why I can’t get relief like anyone else who is in constant pain. Why does someone who has come to the only option they see fit and have doctors in writing saying that MAID is the moral and ethical choice for myself (or anyone in the same situation) have their application revoked? This is my decision to free myself but am denied the safest way. This leaves me open to so many negative possibilities and a state of anxiousness — if I chose to end my life on my own, what if I fail, what would my life be like then? What shape would I be left in mentally and physically? It is a situation that, in a free society, I shouldn’t have to be going through. I should have access to acceptable end-of-life choice. I am tired, worn out, and extremely frustrated.

It is truly very hard to explain or get someone to relate to what you go through when you live a life trying to run away from yourself. I can understand how to people who don’t suffer from depression, anxiety, or an addiction can look at me and say I am lazy, selfish, annoying, or exaggerating my symptoms. But try to look at life from my eyes and see how everyday it is a struggle to get out of bed, decide to shower, and even eat. I will never make excuses for things I do or did. Over the many years of fighting my illnesses, the effects it has had on my mind, body, spirit, personality and actions have left me beaten, broken, empty, and worn out. It is hard to look at your family or friends and when they look back, they see a person who is broken. A parent should never have to bury their son or daughter, but they and I know it’s not if, just when. They too deserve some peace, as living with me is brutal and I cannot imagine what it is like. It’s never said, but they know I am already gone and that is the weirdest feeling.

People often talk about hell being a place you go if you’re bad in life. People think hell is a place you go when you die but some of us would rather die than continue to live in this hell. I want people to know that I have fought with every ounce of whatever I’m able to muster on a given day — to understand that I have done everything I can, but I am suffering and struggling immensely.

Like most young kids, I used to think there were monsters in my closet or under my bed. Either my Mom or Dad would come into my room and reassure me that there wasn’t one by opening the closet and looking under the bed. Now that I am older and have struggled through my ailments since I was a young man, it has dawned on me that those monsters I thought were in my room were just a preview of my future. The monsters I was scared of as a child were the ones inside of me, just waiting to be set free. They were testing the water that was my soul, mind, body, and anything that had to do with me so they would know how hard to go when they were released from their cage. The multiple illnesses I suffer from are extremely cutthroat to the extent they have taken my life before my life is actually taken.