What motivates a person to consider medical assistance in dying (MAID)? At what point does an individual say, “I’ve had enough suffering. This is too hard. It’s too much. I can’t do this anymore?” Making the decision to request MAID is not something that happens overnight. A person doesn’t wake up one morning and say, “I want to exercise my legal right to death with dignity.” The process often happens very slowly and gradually over a period of time. It can take weeks, months, and even years for someone to reach this stage. It’s not a decision that is made lightly or frivolously.

It’s an agonizing, gut-wrenching process that causes much mental anguish and suffering. Usually, we think of individuals who are making end-of-life choices as people later in life. Typically, the average MAID recipient is a university-educated man over the age of seventy with cancer. So why, then, would a young person want to consider this end-of-life choice? Alex Cooke would like to share her journey with you. She wants you to understand how she arrived at this place in her life.

Alexandra Elizabeth Cooke was born on March 28, 1991 in Kingston, Ontario, Canada, by caesarean section. This is her story, as told in her own words, to Dying With Dignity Canada.

My father, who battled alcoholism, abandoned our family just a few months after my birth, leaving me to be raised with my half-sister by my single mother. I’m told I was considered a normal, healthy baby who had one older sibling. My mother struggled with the demands of being a single parent and, as a result, two women who I always called my grandmother and godmother played prominent roles in my early years.

Everything seemed normal until the summer before I was to enter grade six. I had just turned twelve and began experiencing nausea and vomiting which caused me to lose close to forty pounds. The doctors thought it was a bad case of gastroenteritis or the flu, as it is more commonly called. However, on the first day of school, I was so sick that my godmother was called to come and take me home. My godmother, who was diabetic herself, suspected my blood sugar was the problem and tested it. To her shock and alarm, it was life threateningly high, so they took me directly to the hospital. I was treated and released the same day. Unfortunately, my family initially received very little medical support or information. I was simply treated and released.

In the beginning, my diabetes was well controlled with a combination of insulin and diet — which was the treatment prescribed at the time. As I entered adolescence, I struggled with many of the problems that plague teenage girls — body image, weight, peer pressure, boys, and experimenting with forbidden substances such as cigarettes and alcohol. At sixteen, after a session of uncontrolled drinking, I ended up in intensive care at the hospital, battling the ravages of alcohol combined with my diabetes. Like many young women my age, I had issues with my weight and body image. What this experience taught me was how to manipulate my insulin intake so I could eat whatever I wanted and still lose weight. I realized I could use this to solve my problems, and I quickly slipped into a pattern of manipulating my insulin and food to control my body weight and shape. I could be a normal teenager! It was a heady experience.

Note: Today, this is a recognized medical disorder called Diabulimia.

Instead of eating and purging like a normal bulimic, I would eat and not take my insulin, causing my body to eat its own fat. Unbeknownst to me, this practice was creating levels of toxicity in my body and damaging my organs. The first medical crisis struck at seventeen, when I finally ended up in the hospital, in intensive care, with acute diabetic ketoacidosis, fighting for my life. This was my wake-up call. I finally realized that not only was I destroying my body, but that there was a strong possibility that it would cost me any possibility of a future. I decided to make dramatic changes.

Alex was not offered psychiatric support, at that time, to deal with her body image, severe anxiety, or Diabulimia. Alex had to learn to cope on her own. She did the best she could under the circumstance.

As a young woman, I worked multiple jobs, often seven days a week and struggled to make ends meet. I fell in love and at twenty-one, discovered I was pregnant. Although I was living with my boyfriend, this had not been a planned pregnancy. Once again, issues with my diabetes began to cause complications. I struggled with a severe form of morning sickness to the point where I lost an alarming amount of weight in my first trimester. I needed frequent hospitalizations due to the dehydration caused by my vomiting. It wasn’t until my second trimester that I was finally diagnosed with the same condition as the Duchess of Cambridge — hyperemesis gravidarum. This medical problem made it extremely difficult to control my diabetes. There was a medication available to alleviate the symptoms, but it was not covered by the government insurance plan and as a young struggling couple, we couldn’t afford it. It all proved too much for the father of my child. Weeks before our baby was born, my boyfriend, the biological father, walked away and abandoned me and my unborn child. Our son was delivered about six weeks early. My baby struggled with an enlarged heart, lungs that were not fully developed, and jaundice. Care was provided in a neo-natal unit at the hospital, but those first weeks were very difficult as my dear little boy fought each day on life support systems. I quickly became a single mother and was left alone to face the physical, financial, and emotional challenges of having a sick and premature baby. In the years that followed, my sweet little boy faced digestive problems, hearing loss, developmental delays and ultimately, a diagnosis of autism. My love and devotion to him has never wavered. He became the centre of my universe.

After the birth of my child, I continued to struggle with acute nausea and vomiting. Although the medical issue was known to my doctor, the condition continued to be a serious problem. Traditional treatments failed to resolve the symptoms and resulted in frequent hospitalizations. Early tests indicated I had lost fifty percent of my stomach function. This exacerbated other issues as I struggled to control my diabetes and the constant risk of diabetic ketoacidosis.

In addition, I have faced other medical conditions which have caused pain, suffering and physical complications. Frequent migraines have led to a diagnosis of Chiari Malformation of the brain stem. Because I have been unable to access the equipment necessary to perform a standing MRI, my diagnosis and treatment remain preliminary to this day. Ideally, more information would result in a more accurate diagnosis and better understanding of whether or not this issue is related to other medical problems to do with ongoing nausea, vomiting, and digestive failure.

I have also battled with underdeveloped tendons in my legs. As a child, I always walked on my toes because the tendons down the back of my legs didn’t grow properly. Casts were put on my legs, repeatedly, while I was in elementary school, in an attempt to flatten my feet and stretch the tendons. It was an extremely painful process which ultimately turned out to be unsuccessful. I was forced to wear high heels continuously just to walk with some degree of pain control. Corrective surgery was performed, but lack of follow-up physiotherapy and poor pain control led to more problems. The surgery had mixed results. One tendon didn’t respond to the corrective surgery and another cast had to be applied. To this day, I deal with the pain and limited mobility caused by the attempted stretching of the tendons since childhood.

I have faced many additional challenges. Complications from the diabetes have led to neuropathic pain in my hands, legs, and feet. After childbirth, I experienced severe abdominal pain which led to further medical examination and tests resulting in a new diagnosis. My Pelvic Inflammatory Disease symptoms have never been resolved in spite of surgeries and other treatments. 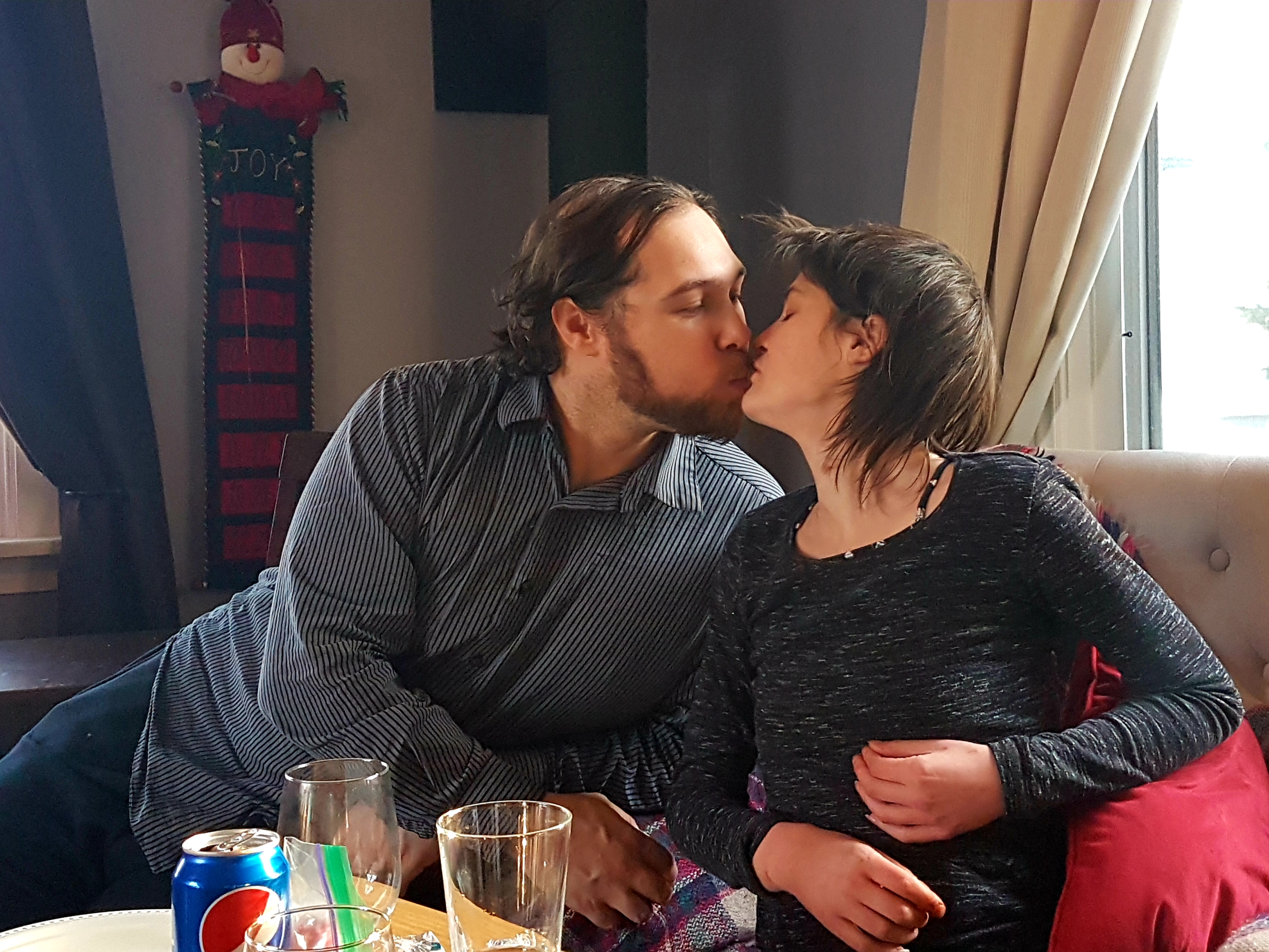 My digestive system has gradually failed over time. I was eventually diagnosed with gastro paresis. Due to a lifetime of vomiting, my teeth became severely damaged, which led to multiple abscesses. Ultimately, all my teeth were surgically removed to protect me from systemic infection. The last few years have been an endless series of surgeries, feeding tubes, pic lines, infections, lengthy hospitalizations, separations from my son and my loving fiancé, home care, financial struggles, stress, anxiety, depression, and uncontrollable pain. Through it all, the vomiting never stops. My weight has dropped dangerously low. There is risk of organ failure as my body grapples with the absorption of the nutrients necessary to sustain life.

Recently, I had reason to hope. A new medical team recommended me for a pancreatic transplant. They hoped that if they could get my diabetes under control, they might be able to improve the symptoms related to my gastro paresis. My weight had dipped under 80 pounds and there was genuine concern that I was starving to death. The transplant team began to make preparations and appointments for pre-surgical screening were set up. It meant travelling to another city, but it was the first hope I had been offered in years. Days before the pre-surgical screening was to have taken place, I was rushed to hospital. Medication I had been taking to resolve one issue had resulted in a bacterial infection which had gone to my heart and aorta. This was all complicated by a blood clot in my leg which migrated to my lung. I spent months in ICU and eventually another ward. I was deemed too fragile to undergo the transplant and my name was taken off the list. My hopes once again turned to ash. My dreams of a future that included life with my dear son and a marriage to my loving fiancé went up in flames. 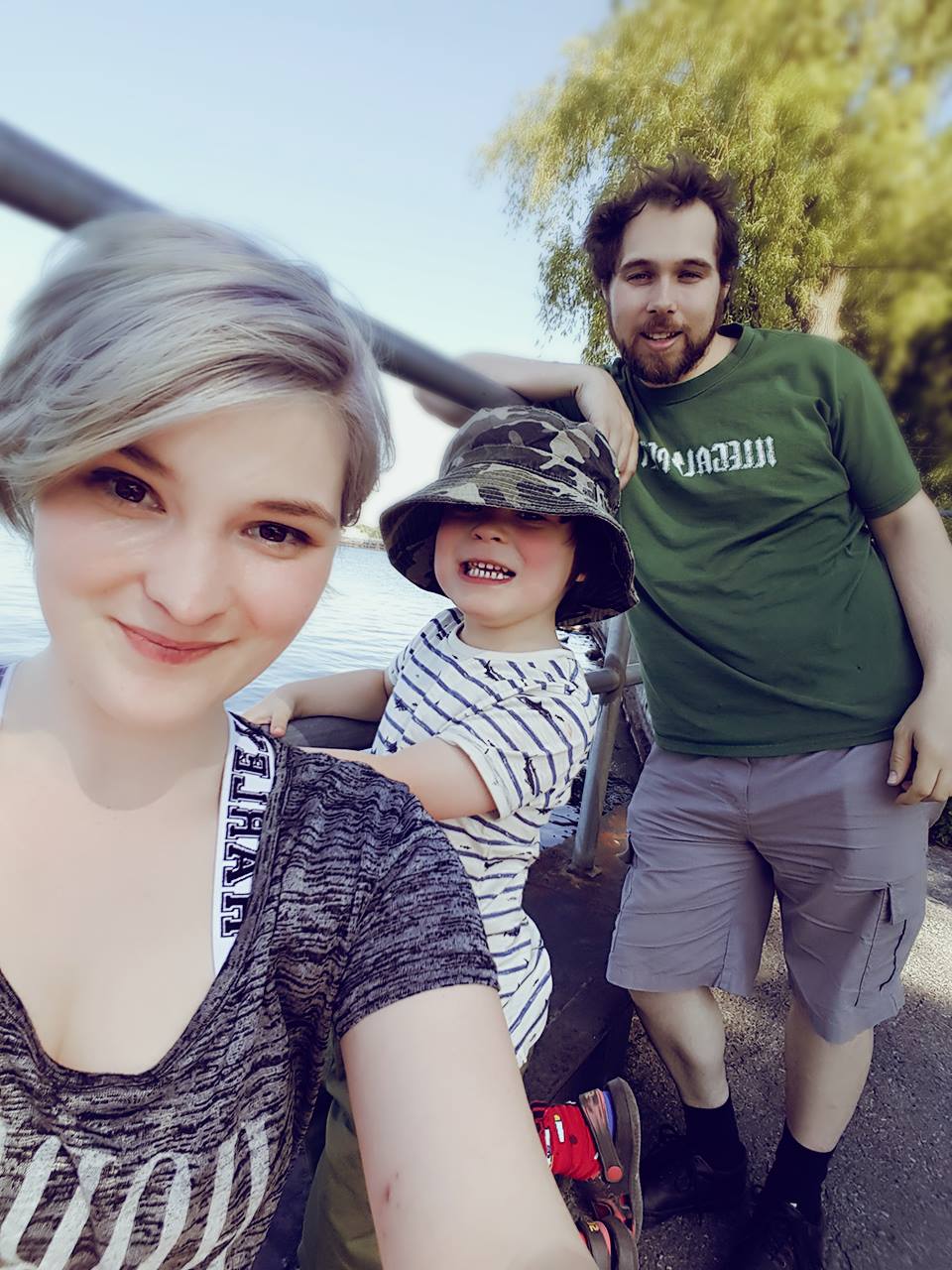 Alex, her fiancé, and her son

Now, I face a life of bleak despair. It’s filled with continuous pain, nausea and vomiting, lack of sleep, periods where I drift in and out of consciousness, unable to perform even the simplest tasks of daily living, and extreme isolation. Just being able to get out of the house for brief family excursions is an hour-by-hour challenge punctuated with questions such as “Can I do this?”, “How can I even get dressed?”, “Will there be a bathroom?”, “What if I vomit?” to name but a few of the worries I face — and that’s before I attempt to leave the house! I have been robbed of any quality of life I might have had, and for me, there does not appear to be any hope left.

Faced with these realities, Alex had begun to think about medical assistance in dying. The thought of another twenty or thirty years of endless suffering was just more than she can bear. In the following segment of her story, Alex shares her thoughts, concerns, and fears as she journeys forward, exploring all her options.