DWDC calls on provinces, territories to ensure that assisted dying is allowed in all public hospitals

Dying With Dignity Canada (DWDC) is calling on Canada’s provincial and territorial governments to ensure that residents of all public hospitals, hospices and long-term care facilities have fair access to their right to medically assisted dying.

The leading organization helping Canadians to avoid unwanted, unnecessary suffering at end of life, DWDC will be mobilizing its supporters to push their provincial and territorial leaders to ensure that all publicly funded healthcare facilities allow medically assisted dying on their premises.

“Canadians expect to be able to access a full range of end-of-life care options, no matter where they live,” said DWDC CEO Shanaaz Gokool. “They should not have to endure the hardship or the indignity of having to leave their hospital, and perhaps even their community, to exercise what is their right to a peaceful death.”

This announcement comes after Ian Shearer, an 84-year-old Vancouver man with spinal stenosis, kidney failure and advanced heart disease, had to endure a gruelling patient transfer because St. Paul’s, the hospital where he was living, refused to allow him to have an assisted death in its care. Arrangements had to be made to send Shearer to Vancouver General Hospital, and the ambulance ride subjected him to unnecessary, excruciating suffering, his daughter, Jan Lackie, said. 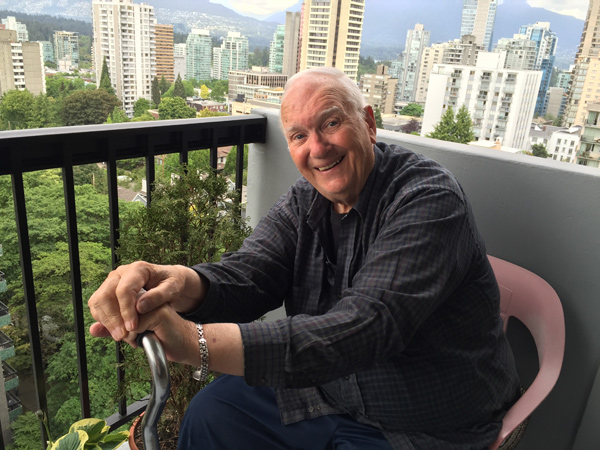 Ian Shearer had to endure a gruelling patient transfer out of Vancouver's St. Paul's Hospital in order to access physician-assisted dying. (Jan Lackie)

“Dad’s last day with us, his last hours of life, could have been so peaceful and loving for him and for those of us by his side,” Lackie told DWDC. “Now, I live with this haunting memory. What Dad had to go through to exercise his legal right to die is something no one should ever have to experience.”

In response to Shearer’s story, DWDC is mobilizing its supporters to call on the B.C. government to take immediate steps to remove unfair barriers to accessing assisted dying. Last week, the organization launched B.C.-specific digital advocacy tool to help supporters share their views with the province. DWDC will target other provinces with a series of similar actions over the next week. A similar action for Alberta went live on Wednesday.

These efforts serve as a preview of DWDC’s upcoming Shine a Light Campaign, which is aimed at uncovering and ultimately eliminating unjust barriers to access that face Canadians who want to die in peace with the help of a physician.

“Across this country, desperately ill individuals who want to exercise their right to assisted dying are encountering misinformation, unreasonable delays and, in some cases, deliberate obstruction,” Gokool said. “Powered by the enthusiasm of our supporters, our campaign will shine a light on these abuses and raise a loud voice for a healthcare system that respects Canadians’ end-of-life rights.”

END_OF_DOCUMENT_TOKEN_TO_BE_REPLACED

Are you passionate about improving quality in dying for all? Do you want to take on a leading role in...