Most Albertans believe assisted dying should be allowed at all public hospitals: poll

Eight in 10 Albertans disagree with the practice of allowing publicly funded hospitals in the province to ban assisted dying on their premises, a new poll has found.

In February, Dying With Dignity Canada (DWDC) commissioned the research firm Ipsos to conduct a survey of 800 Albertans on whether they believe all public hospitals in the province should be required to allow medical assistance in dying (MAID) on-site. The poll follows a series of news reports by CBC Edmonton surrounding the treatment of severely ill Albertans who requested MAID in healthcare facilities where it is banned.

“These results send a strong message about where Albertans stand on this issue,” said Bradley Peter, a DWDC board member and co-chair of the organization’s Edmonton chapter. “Hospitals that receive millions of dollars in public funding have a duty to provide public healthcare, including medical assistance in dying.”

Currently, more than a dozen public hospitals in Alberta refuse to allow assisted dying on their premises. Patients who request MAID at these facilities have to transfer to another institution or into the community in order to end their lives with the help of a clinician. According to Alberta Health Services, as of Feb. 28, a total of 76 Albertans had to transfer out of objecting healthcare institutions in order receive MAID. About 85 per cent of those cases originated in facilities with a religious affiliation, including those operated by Covenant Health.

“People who qualify for MAID are some of the frailest, most vulnerable patients in Alberta’s healthcare system,” said Peter. “Forcing these individuals to transfer out of hospital — sometimes to a facility many kilometres outside their community — so they can access their right to MAID is medically unnecessary, morally wrong, and runs counter to the beliefs of most Albertans. We urge our provincial leaders to put a stop to forced transfers for assisted dying without delay.”

The survey, conducted from Feb. 14 to Feb. 18, 2019, found that Albertans across the province approve of requiring all publicly funded hospitals to provide or allow assisted dying on-site. Levels of support were high among Calgarians (82 per cent), Edmontonians (77 per cent), and residents of the rest of Alberta (80 per cent). 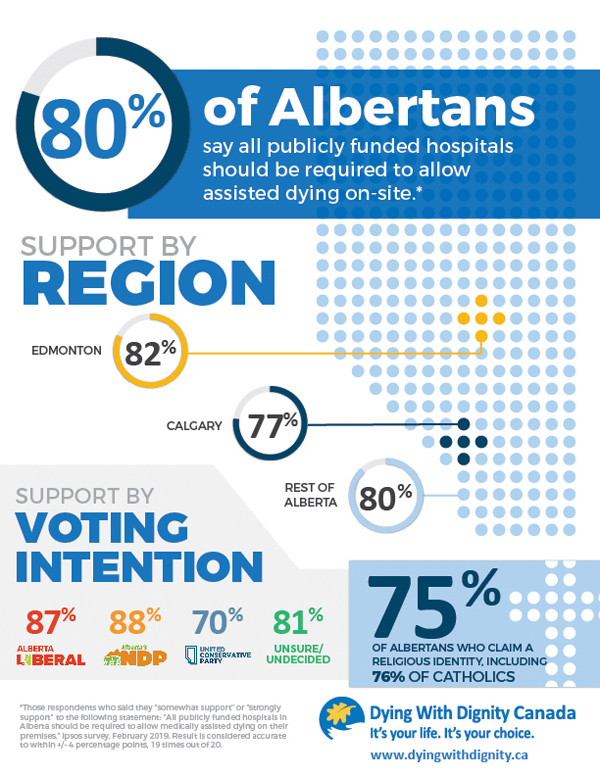 For every demographic group studied, a majority of respondents said they believe all publicly funded hospitals should provide or allow assisted dying. Approval was high among supporters of all the major provincial political parties, including supporters of the Alberta Liberal Party (87 per cent), the Alberta New Democratic Party (88 per cent), and the United Conservative Party (70 per cent).

The results demonstrate that the right to assisted dying is an issue that unites rather than divides Albertans, Peter said. More than eight Albertans in 10 (86 per cent) support a person’s right to access MAID as long as they are eligible under federal law, he noted, citing another key finding of the new DWDC-Ipsos poll.

“Our decision-makers should not fear taking bold steps to protect our right to access a peaceful death,” Peter said. “Not only is putting an end to forced transfers the good and just thing to do, but it also presents our leaders with an opportunity to win hearts and minds in the province of Alberta.”

The poll was conducted between Feb. 14 and Feb. 18, 2019. A sample of 800 Albertans age 18 and older was surveyed online. The results have been weighted by region, age, and gender to reflect the demographic makeup of the provincial population. The aggregate results are considered accurate to within +/- 4 percentage points, 19 times out of 20.