Advancing the conversation on advance requests

Studies on the future of your choice present DWDC with new challenges and opportunities.

What a difference a Google search can make.

It was late April and the Council of Canadian Academies (CCA) — chosen by the federal government to study the possible expansion of Canada’s assisted dying law — had just released the names of the academics who would oversee the studies. At the very top of the panel studying advance requests for assisted dying was the working group’s chair, Dr. Harvey Schipper.

At first, the University of Toronto professor’s appointment didn’t raise any eyebrows. But after a quick search of his name, our reaction quickly shifted from neutral to stunned disbelief. 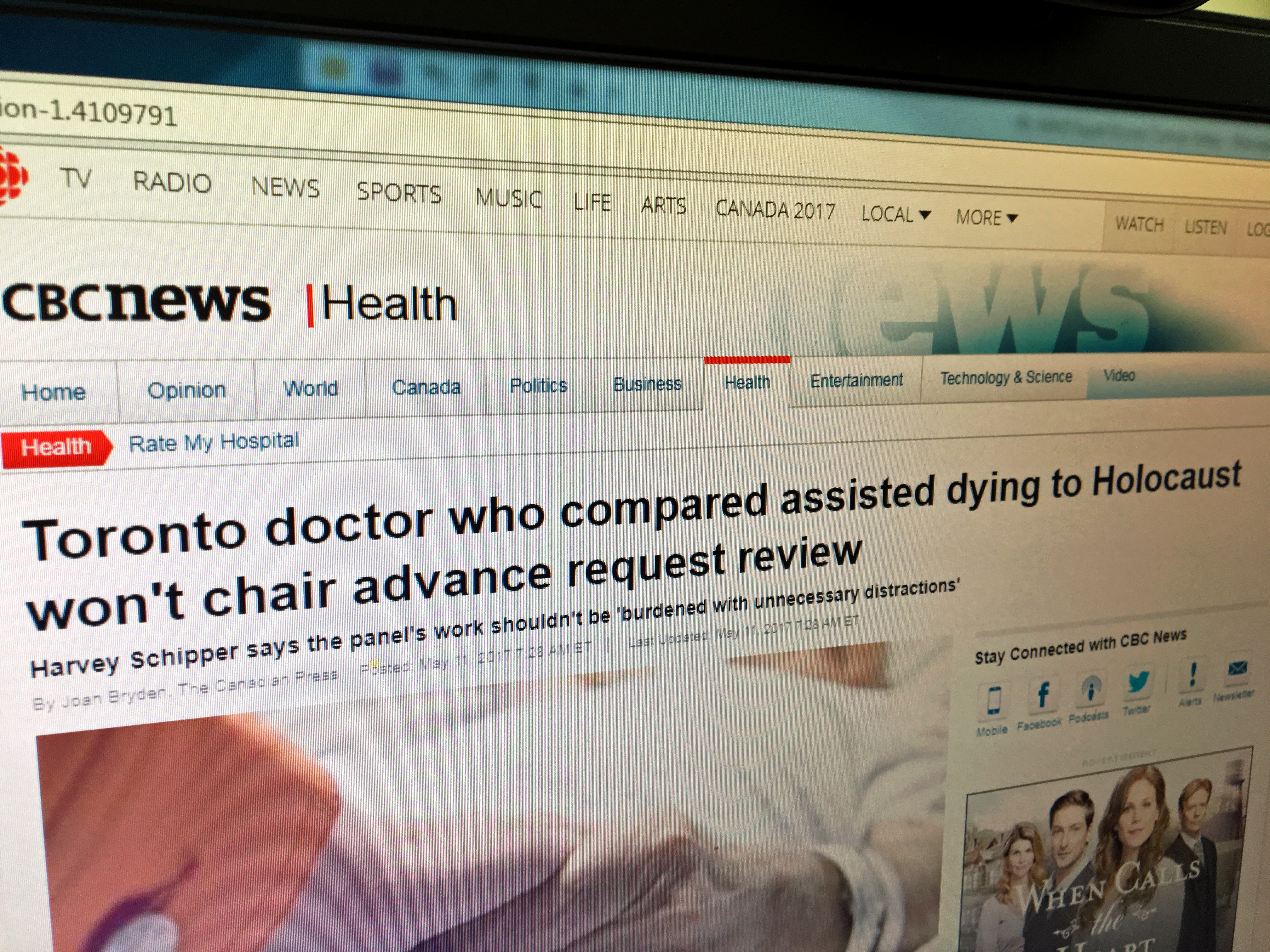 DWDC drew attention to the hateful past comments of Dr. Harvey Schipper, who had been tapped to chair an influential study on advance requests for assisted dying.

Right there, written plainly in a 2014 op-ed for The Globe and Mail, were Schipper’s offensive statements likening assisted dying to the Holocaust. We asked ourselves, “Why would someone who had expressed such hateful views on assisted dying be appointed to lead a supposedly ‘evidence-based’ exploration on the future of your choice?”

Our supporters have told us loud and clear: defeating the discriminatory ban on advance requests for assisted dying must be a top priority for Dying With Dignity Canada. Consequently, we knew we couldn’t stay silent about Schipper’s comments, and we didn’t. As you’ll see, our response in the Schipper case is but one example of how we’re defending the rights of Canadians who want — and have a right to — choice in the face of a dementia diagnosis.

Informing the media and our supporters was the first step. We sent a tip to Joan Bryden of The Canadian Press and watched as the news of Schipper’s appointment and his inflammatory comments spread across the country.

Dying With Dignity Canada also made a public call for Schipper to clarify his statements. Did he still stand by what he wrote? Could he affirm his commitment to impartiality as chair of the panel examining how Canada’s assisted dying law affects individuals whose choice depends on being able to make an advance request for assisted dying?

After two weeks of silence, the CCA announced that Schipper would remain on the panel, but he would no longer serve as its chair. It was a promising development in a process that, while influential, has raised concerns for our organization. These studies were launched to examine the possibility of opening up assisted dying access for mature minors, individuals whose primary conditions are psychiatric, and individuals with degenerative conditions like dementia who would need to consent in advance in order to be able to have an assisted death. But from the get-go, the government instructed the working groups not to provide policy recommendations in the final report, which is due in late 2018.

Giving you a platform to Voice Your Choice

In addition, the CCA working groups will not be conducting broad consultations with ordinary Canadians whose rights are at stake. Instead, they have asked for feedback from 500 organizations who have an interest in the issues at hand. We believe that excluding ordinary Canadians from this process is unjust, and frankly, un-academic. How can researchers understand the impacts of our country’s assisted dying rules if they don’t consult the people who are most affected?

Recognizing how crucial it is for our supporters to be heard, we relaunched our Voice Your Choice campaign, inviting Canadians from coast to coast to share their personal stories. In their own words, they have let us know exactly what is at stake for countless Canadians if the law remains unchanged. These testimonies will be included as part of our official submission to the CCA.

We know your stories are our best shot at effecting change this time around, and they will be pivotal in other studies, too. Quebec Health Minister Gaétan Barrette said in March that his government would be establishing its own expert panel to examine the issue of advance requests for assisted dying. We look forward to learning more details about the study and vow to keep our supporters informed about how they can get involved.

When the federal assisted dying legislation was passed last June, we knew we couldn’t just pack it up and close up shop, not with so many Canadians still on the outside looking in. DWDC will continue to do everything in our power to make sure your voices are heard by the people on the inside — whether they like it or not.