Groundbreaking poll: 8 in 10 Canadians support the right to advance consent for assisted dying

Eight in 10 Canadians agree that individuals with a grievous and irremediable medical condition, including patients with dementia, should be permitted to consent to assisted death in advance.

This is a key finding of a new public opinion poll commissioned by Dying With Dignity Canada and conducted by Ipsos Reid. The poll digs into one of the most sensitive issues facing federal lawmakers as they prepare new rules for physician-assisted dying: the issue of advance consent, and more specifically, whether a still-competent patient with a serious degenerative illness should be allowed to make an advance request for assisted death that could be carried out when he or she is no longer competent.

“The results are astonishing,” said Dying With Dignity Canada CEO Wanda Morris. “While legislators are debating new rules for physician-assisted dying, ordinary Canadians have made it clear they support laws that put patient choice front and centre.”

More than 2,500 Canadians were surveyed for the poll. It was conducted between February 2 and February 5, nearly one year after the Supreme Court announced its decision in Carter v. Canada. When it comes into effect on June 6, 2016, the ruling will strike down the country’s Criminal Code ban on physician-assisted dying for patients who are suffering intolerably as the result of a grievous and irremediable illness and who clearly consent to the termination of life.

The poll found that 85% of respondents support the Supreme Court’s decision. Of those, 90% support allowing patients with a diagnosis of a grievous and irremediable medical condition to provide advance consent for physician-assisted dying.

Shanaaz Gokool, DWDC’s National Campaigns Director and incoming CEO, urged federal and provincial lawmakers to take the poll results to heart. “Real choice means allowing patients facing terrible diagnoses to make advance requests for physician-assisted dying,” she said. “If Canadians with degenerative illnesses like dementia aren’t given this option, then many will face a cruel choice: end their lives too early while still sound of mind or live through a nightmare for far, far too long.”

Highlights from the poll include: 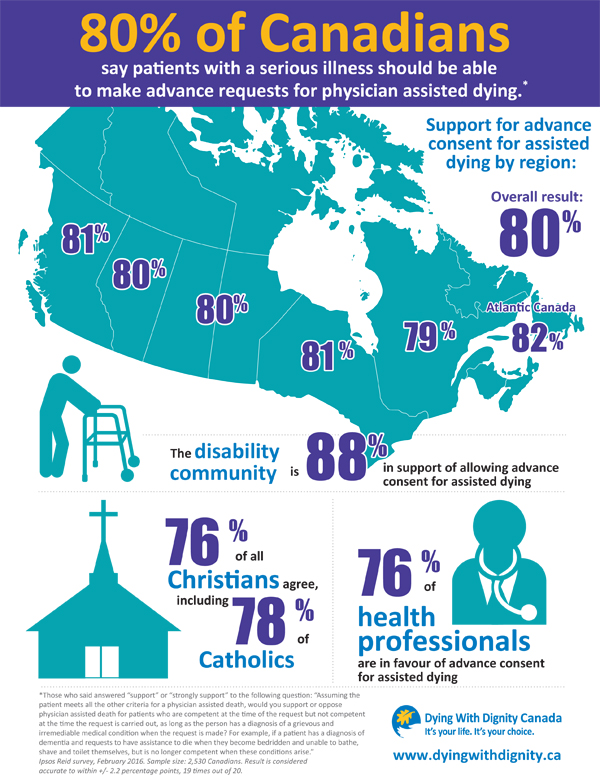 Eight in 10 respondents (80%) said they support the option outlined in the following question: “Assuming the patient meets all the other criteria for a physician assisted death, would you support or oppose physician assisted death for patients who are competent at the time of the request but not competent at the time the request is carried out, as long as the person has a diagnosis of a grievous and irremediable medical condition when the request is made? For example, if a patient has a diagnosis of dementia and requests to have assistance to die when they become bedridden and unable to bathe, shave and toilet themselves, but is no longer competent when these conditions arise.”

Support was strong in every region of the country; no statistically significant regional variations were found.

Individuals with severe physical disabilities (those who report being unable to carry out the basic activities of daily living without assistance) are 88% in support of allowing Canadians with a grievous and irremediable illness to consent in advance to assisted dying (results valid within +/- 12.3%).

Individuals who self-identified as members of a regulated health profession (such as doctors, nurses and physiotherapists) are 76% in support of allowing advance consent for assisted dying (results valid within +/- 8.9%).

78% of Catholics and 73% of Protestant Christians support allowing Canadians with a grievous and irremediable illness to make advance requests for physician-assisted dying. Sample sizes for people of other faiths weren’t large enough to allow for statistically significant comparisons.

Other poll questions presented different possible scenarios involving advance consent for assisted dying. About eight in 10 (82%) Canadians said they would support physician-assisted dying for patients who have a scheduled assisted death, and were competent at the time of the request, but who lose competence before the request can be carried out (for example, in the case of a patient who falls into a coma just days before the scheduled provision of aid in dying).

Seven in 10 (71%) Canadians would support allowing a patient without a diagnosis for a grievous and irremediable illness to make an advance request for physician-assisted dying that would be honoured if certain pre-stated conditions were met.

The Canadian public resoundingly endorsed the Supreme Court’s Feb. 2015 decision on physician-assisted dying. More than eight respondents in 10 (85%) reported being in support of the high court’s decision.

More about the poll:

The poll was conducted between Feb. 2 and Feb. 5, 2016. A sample of 2,530 Canadians was surveyed online and the results have been weighted by region, age, and gender to reflect the demographic makeup of the national population. In cases where the base sample was used, the results are considered accurate with +/- 2.2 percentage points, 19 times out of 20.