The well-wishers started filing through AB’s door before 6 a.m. As staff and fellow residents at a care home in Ontario came to say their final goodbyes, the tears that were shed couldn’t wash away AB’s resolve. At 77, she had lived a long, rich life, but the shattering pain she suffered for decades had grown too much to bear, and it was only getting worse. She told visitor after visitor that she was “going home.”

Five hours later, on a balmy morning in August, AB realized her long-sought-after wish: to die in peace with a doctor’s help in the presence of her close family. It was the quiet culmination of a months-long struggle that saw AB go to court to confirm her eligibility for medical assistance in dying (MAID) once and for all. That she was ultimately successful is a testament to her persistence and resourcefulness, and in particular, her decision to enlist key players in Canada’s right-to-die movement — including Dying With Dignity Canada — to support her in her quest. In doing so, she has helped to dispel harmful misconceptions about this country’s assisted dying law, breaking down barriers facing suffering Canadians who want to exercise their right to a peaceful death. 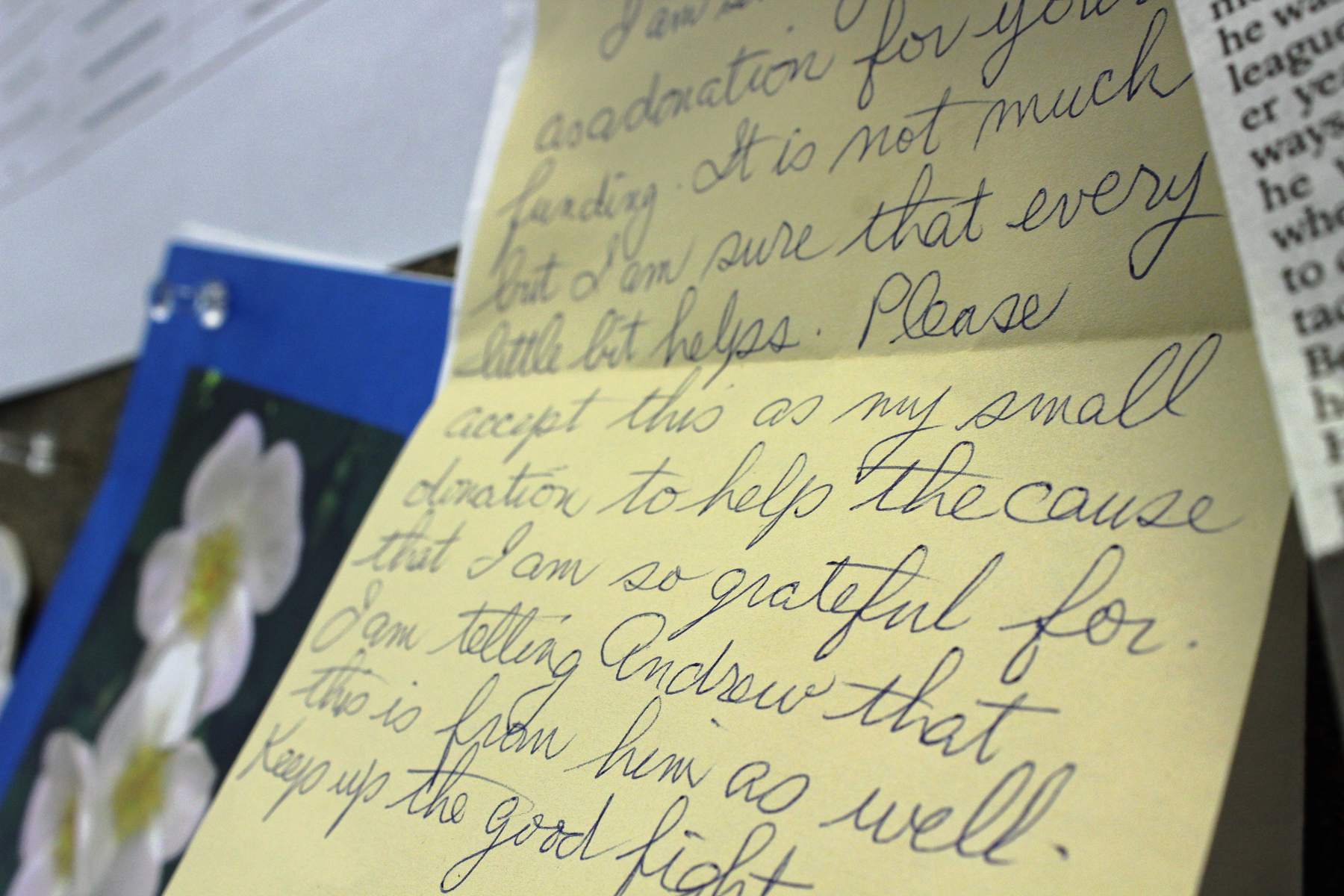 A letter from AB to Dying With Dignity Canada CEO Shanaaz Gokool.

AB, whose name is protected under a court-ordered publication ban, made her first call to DWDC’s national office in early April. She introduced herself and explained that she had been approved for assisted dying, but that one of her doctors was having second thoughts. She asked if there was anything we could do to help her. DWDC Communications Officer Cory Ruf took down AB’s contact information and quickly brought her call to the attention of Shanaaz Gokool, the organization’s CEO. Shanaaz called her back soon after.

“I knew minutes into our first conversation that there was something special about her,” Shanaaz said. “She explained her situation with such clarity and conviction. She had a fierce, but dignified way of communicating that has really left an impression on me.”

As Shanaaz would soon learn, pain had been a constant companion for AB during the last half of her life. In 1982, she was diagnosed with inflammatory and erosive osteoarthritis, an excruciating condition that causes the swelling of the joints and can disfigure the hands and feet. She was 43 at the time of her diagnosis. “At that time the pain was not debilitating,” she said in an affidavit submitted to court. In fact, two years later, when her husband was felled by a sudden heart attack, she took full-time work as an administrator for an auto-parts company. “My condition caused me significant pain throughout the time I worked there — I would often have to put a bag of frozen peas on the back of my chair just to sit down — but I made enough to pay the bills and support my children,” she told DWDC in early May.

AB worked for another 11 years until she “could no longer function with the pain.” In retirement, she moved in with her daughter. To stay busy, she joined a senior’s group in the community. However, the creeping progression of her osteoarthritis made even the most basic daily activities a challenge. In the late 1990s and early 2000s, AB had six operations that were aimed at reducing her pain. Both knees and one of her hips were replaced, and she had rods inserted into her left leg and lower back — surgeries that, she said years later, had done her more harm than good. “In fact, the pain I experience is most severe in the places I had these operations.”

By the end of 2016, AB had had enough. On January 1, 2017, she sent a letter to her doctor stating that she was ready to end her suffering. The doctor said he would not provide AB with an assisted death, but he agreed to refer her to a different physician. AB made a formal written request for MAID in early April, and the doctor determined that she was eligible for access under the rules laid out in Bill C-14, Canada’s assisted dying law.

Finding another independent physician to confirm AB’s eligibility proved difficult. DWDC was able to help in this regard. We located a MAID provider in another part of the province who was willing to act as a second assessor. A date in May was set for this doctor to provide a detailed assessment through telemedicine. After days of deliberation, he, too, told AB that she qualified.

For a moment, it seemed as though AB’s arduous journey was coming to an end. But in reality, it was far from over. Despite the opinion of the second assessor, the primary physician refused to move forward. He remained confident that AB qualified for MAID under his reading of Bill C-14, but feared that law enforcement didn’t share his view. At the root of the dilemma was the law’s most controversial requirement: that a person’s natural death be “reasonably foreseeable.” As soon as Bill C-14 was tabled in Parliament in April 2016, critics lambasted the reasonably-foreseeable rule as “vague” and difficult to apply. Its language was alien to doctors and nurse practitioners, who were accustomed to the exacting prose of medical textbooks and scientific journals. The debate raised the spectre that, once enacted, the law would be applied inconsistently.

AB was devastated. On more than one occasion, her son had purchased airline tickets to say his final goodbyes, AB said. “He has three times booked tickets… The first time, he couldn’t get any money back on it. The second time, he got some money back. The third time, he said, ‘Mum, I have holidays anyways, I’m coming in two-and-a-half hours.’ It’s been very emotional.”

Having her choice granted and then taken away was unacceptable to AB. She believed that neither she nor anyone else should be subjected to the same emotional rollercoaster. With the help of Toronto lawyer Andrew Faith, she made an application to court to have her eligibility for MAID confirmed once and for all. 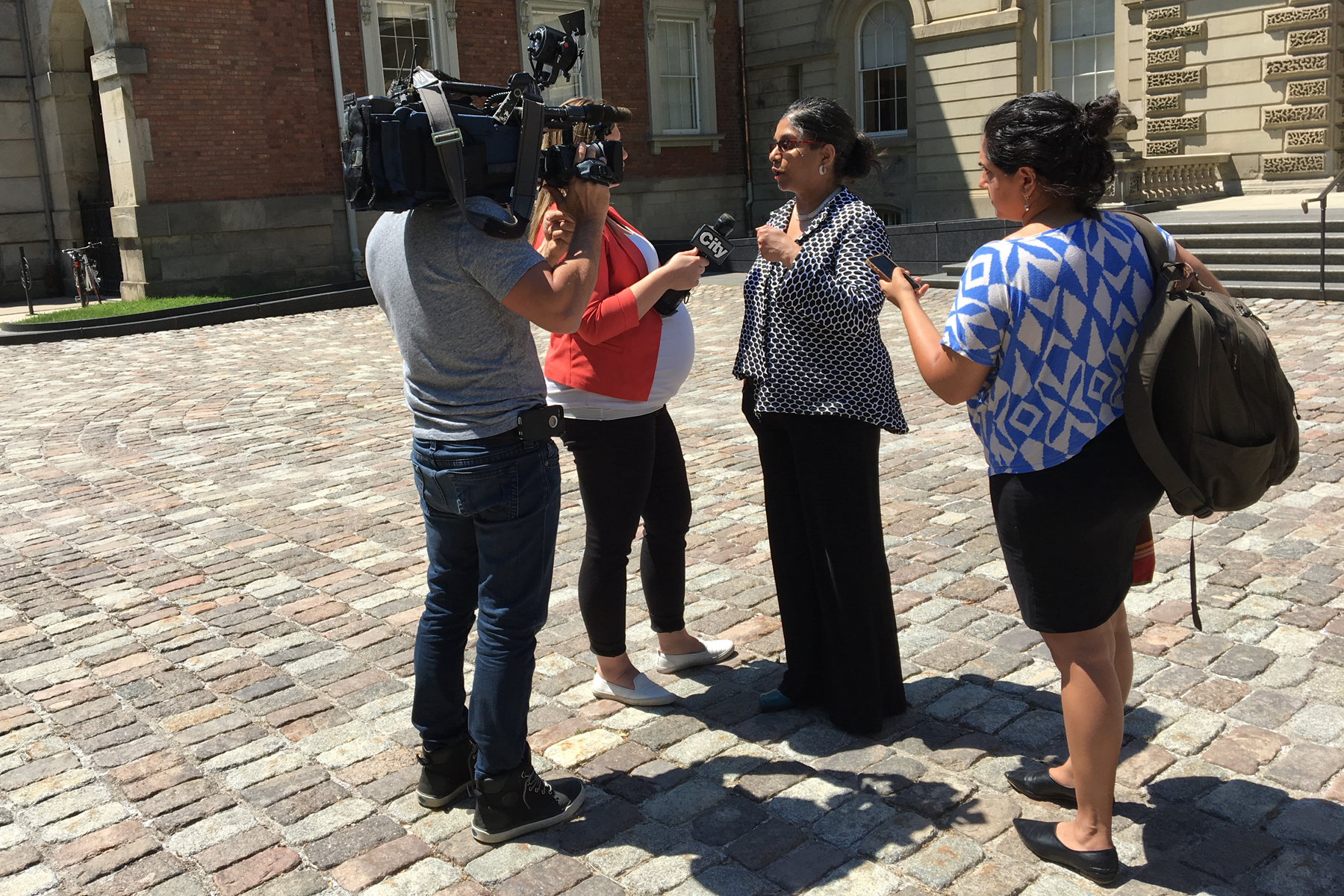 DWDC CEO Shanaaz Gokool speaking with reporters about the ruling in AB's case on June 19, 2017.

On June 19, AB was vindicated. Ontario Superior Court Justice Paul Perell ruled that AB’s death was “reasonably foreseeable.” In addition, Perell’s ruling took aim at some of the misconceptions surrounding Bill C-14 that contributed to AB’s ordeal. A person needn’t be terminally ill for her natural death to be “reasonably foreseeable,” nor does one need to be suffering from a fatal medical condition in order to qualify for MAID. When making a determination about a patient’s eligibility, providers of MAID, “need not opine about the specific length of time that the person requesting medical assistance in dying has remaining in his or her lifetime,” Perell noted.

Shanaaz was in court in support of AB on June 19 and called her soon after Justice Perell announced his decision. “She was in giddy disbelief,” Shanaaz recalled. “And she wanted to know whether other Canadians in her position might benefit from the decision, too.”

A legacy of helping others

AB derived comfort from knowing that her struggle would help other Canadians facing unfair barriers to MAID access, said her first cousin and close confidante. “She had said to me, ‘I need to make sure that I was able to make a difference before I go. Not to be remembered, but to make sure for [myself] that I did everything that I can before I go.’”

This attitude didn’t come as a surprise to those who knew AB well. As a single mother, she was dogged in ensuring that her children received a good education. A pillar in her community, she organized social gatherings at the long-term care home where she resided during the last years of her life. “She’s given to others all of her life,” her cousin said. “She’s someone who wants to be in control of things and keeps things copacetic.”

Much of AB’s life was dedicated to attending to others’ needs, but there was no mistaking that her last act was about tending to her own. “I’ve reached a stage in my life where I’ve done all the things I want to do,” she said in May. “I’ve produced three children — they’re fantastic young people. I enjoyed being in business and I did a lot of meaningful work over the years.